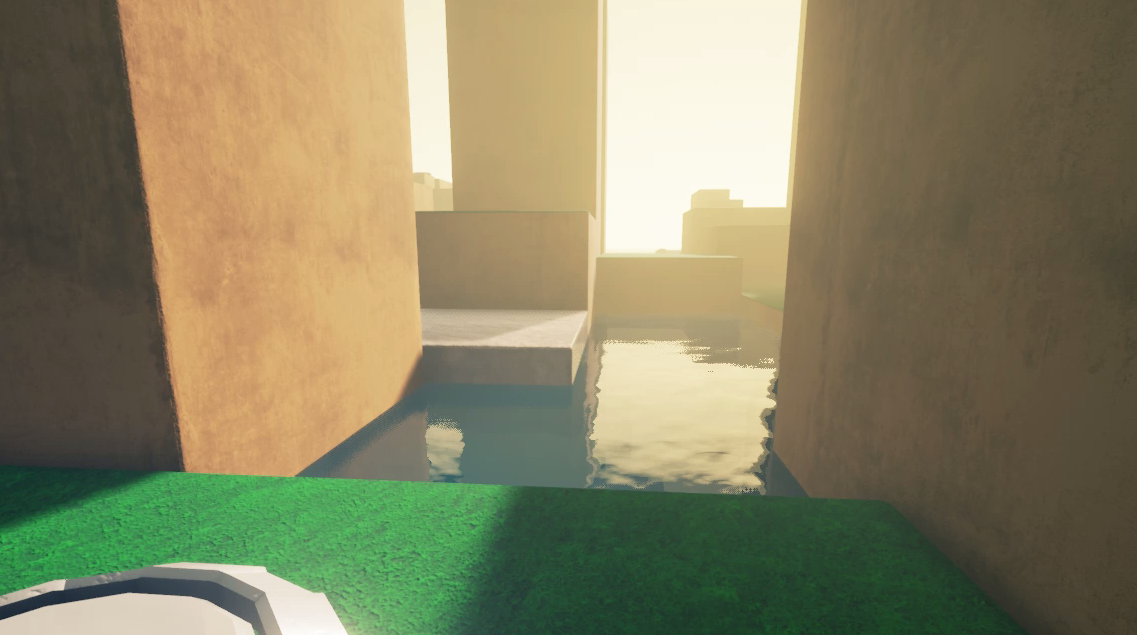 First person platforming games are making a comeback, and parkour-style games look they’re starting to come back in full force. Refunct is a short and sweet platformer, featuring a minimalistic art style, light elements of parkour, an engaging musical track and flowing gameplay. Discover the world and create your own path as you jump, slide, climb and swim around a beautifully crafted world.

The graphics in Refunct are simple, minimalistic perfection. Refunct embraces the simplicity of it’s graphics and makes excellent use of its setting and environment to generate beauty from simplicity. Refunct’s world features a day and night system, with the world gracefully changing from a blinding morning as the sun rises, to a cool evening as the sun slowly dips below the horizon as stars dot the sky.

The various blocks the make up the environment start off gray, and regain their color as you bound across the world, as you revitalize the world and bring life to your surroundings. For all of it’s beauty, Refunct does run into a common stumbling block that is seen often in minimalistic design, repetitiveness. As beautiful as the world looks, the revitalized blocks look identical to each other, the same brown and green platforms dot the landscape, and while at first aesthetically pleasing, different color schemes would break up the monotony of the world. Another small complaint about the graphics, is how the “grass” that appears after you revitalize a block, is just the top of the block colored green, not actual grass. All things considered, the graphics for Refunct are gorgeous, with only a few minor details that take away from the experience.

Refunct’s gameplay emphasizes peaceful exploration, and the soundtrack does a wonderful job in creating a relaxing, almost dream-like atmosphere to complement the gameplay. The music is never intrusive and helps push the gameplay along, allowing you to feel like it’s okay to take your time and explore all the nooks and crannies the world has to offer. The sound effects that accompany your actions are functional, they help emphasize your movement and feel organic to the game.

First person platforming has never been a popular genre, with Mirror’s Edge being the only AAA game in recent memory that fits the genre. With the recent resurgence of indie games, we’re now seeing a wider variety of games, covering genres that have largely gone untouched by some of the bigger studios. Refunct has tossed its hat into the first person platforming ring, where it joins recent recent indie newcomers such as Deadcore and Lemma.

With exploration being the main focus of Refunct, tight controls and solid movement mechanics are going to be foundational to enjoyable gameplay. At first glance, Refunct doesn’t seem to innovate or push the envelope for first person platformers. The basic movement mechanics are all there, you’re able to jump, climb up ledges, swim, slide and wall jump. These mechanics aren’t particularly new or different and don’t seem to make the game stand out at all, but that’s exactly why the game shines. The mechanics are implemented wonderfully, all of these mechanics feel organic and natural extension of your character. There aren’t outstanding bugs, or quirks about these movement options, which allow you to become fully immersed in the game. When these mechanics are combined with tight and responsive controls, any mistakes that are made, fall on you. Refunct is a game about exploration, about forging new paths and discovering different avenues to reach your goal. The controls and movement options are solidly implemented and augment the atmosphere that the game is trying to convey.

The actual gameplay for Refunct is simple, you spawn on a cluster of grey blocks that make up a tiny island and there’s a big red button that’s begging to be pressed, once you press the button more islands will rise out of the ocean with more big red buttons that you’ll need to press. As you hop from island to island, you’ll revitalize the world around you, as grey blocks burst into color as soon as you step onto them. The game isn’t particularly challenging, with only the last couple of buttons providing an actual challenge on how to reach them, but the point of this game isn’t to provide a challenge. Refunct provides an unique experience that’s not common in indie games nor AAA games. It manages to meld the atmosphere and purposefulness of walking simulators, with the joy and mechanics of a well polished platformer.

For all of its strong points, Refunct does have one glaring flaw, length. Refunct took me about half an hour to complete to 100 percent, and that’s with a lot of exploration(diving into the water is an amazing experience) and trying to find alternate routes to get to a button. As much as I did enjoy my time with Refunct, the time was woefully short and left me wanting more. The more challenging platforming came near the end and I would have loved an additional hour to spend roaming the world and completing more platforming challenges. At times, Refunct feels like the engine for a much larger and more ambitious game, as the mechanics and controls polished to perfection. Even given the length of the game, I thoroughly enjoyed my time with Refunct and would recommend it to those that are looking for something a little bit different.

I do want to spend some time giving out a shoutout to the developer for the game, Dominique Grieshofer. Not only is the game akin to a pleasant stroll in the park, he manages to fully immerse the player in the world. He seems to have an inherent ability to speak to the player and direct the player towards an objective without explicitly telling the player what to do and where to go.

If you’re on the fence about whether or not the game is for you, hopefully the gifs do an adequate job on relating the atmosphere and tranquility that the game offers. The game sits at $3 on Steam and I believe it’s well worth the money.