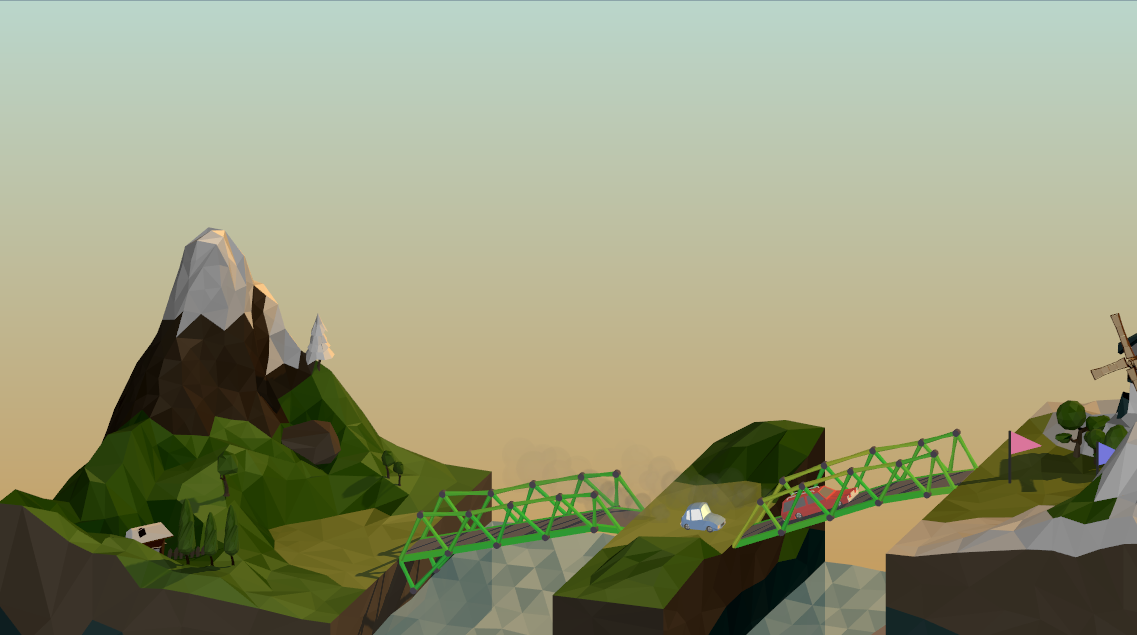 Note: All gifs besides the first one were made using the builtin GIF maker in Poly Bridge

Poly Bridge is a physics simulation game in which you build “bridges” to help vehicles cross over dangerous ravines and trenches. Bridges is a term I use loosely, as wet toilet paper has more structural integrity than some of the monstrosities you create. Poly Bridge is currently in Early Access and is undergoing active development with a release date geared toward late 2015/early 2016.

Poly Bridge starts you off easy, there’s a simple series of tutorials where it holds your hand through the bridge creation process, and gives you a gist of how to play and win each level. The bridge creation process is easy and intuitive and allows for rapid prototyping of various structures that you want to try it. At it’s core, Poly Bridge is a bridge building game, gameplay is literally as simple as clicking to create roads going from point A to point B and finding ways to support your bridge as vehicles of varying sizes and weight make their way across(or don’t as is usually the case). It is this simple design that gives birth to a complex, multi-faceted beast, as you strain your creative juices in an effort to create a bridge that comes under budget, structurally sound and able to deal with the masochistic level design that the developer’s(and community) has created. These three elements create a perfect storm of gameplay, that push your imagination to the test as you create structures that barely hold together as a bus filled with school children cross your bridge that spans a dangerous ravine with shark infested waters.

While finishing a level is a reward in and of itself, the best part of Poly Bridge is definitely watching your meticulously constructed bridge spectacularly fail, as pieces explode and fly halfway across the map. There’s nothing quite like watching a perfectly constructed bridge holding the weight of 3 cars, then spontaneously explodes because you hooked up the hydraulics wrong and forgot to put in a split joint. Failure in Poly Bridge happens in seconds and is almost always spectacular to watch.

There are a few minor bugs, where the game will freeze for a bit when the vehicle reaches its destination, but it occurs pretty rarely and you only need to sit tight before it straightens itself out. One complain I did have, was that I was unable to create structures over previously existing architecture of different materials. Whether this was a design choice remains to be seen, but I did have to do quite a bit tearing down and building back up in a specific order, to get my structure working the way I wanted to.

Dry Cactus wraps up this in a neat little bow with a unique graphical aesthetic, a wonderfully relaxing soundtrack, the ability to share and save your successful runs as gifs and level editor for you to create and download levels created by the community. Poly Bridge is still in Early Access, but the developers have been nothing but helpful and communicative with the community. I look forward to the final release date, as the base gameplay is extremely solid and extremely satisfying. As of this current iteration of the game, I can heartily recommend it.