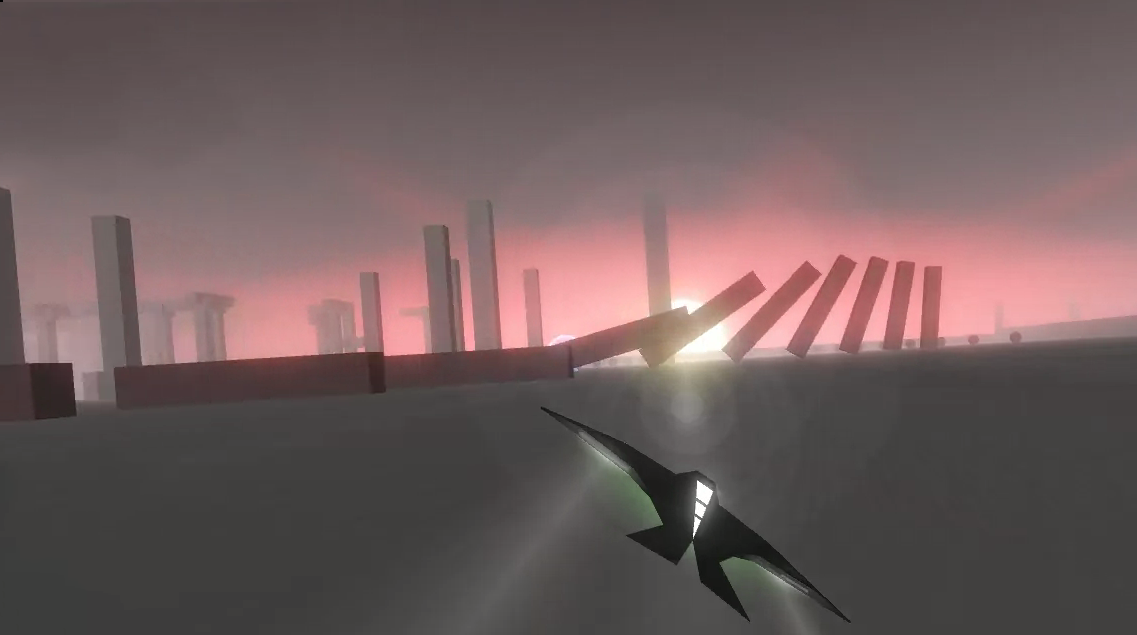 Race The Sun is an endless flyer that literally pits your solar powered spaceship against the setting sun. Race The Sun is a high octane, adrenaline pumping adventure as you dip, dive and navigate through narrow corridors and giant pyramids, in an attempt to chase the sun and keep yourself powered on for as long as possible.

Race The Sun is late to the game of endless runners(or flyers as the case may be), with old favorites such as Canabalt and Temple Run taking center stage for extremely simple and addictive endless runner games. RTS is a latecomer to the genre, sporting simplistic graphics and a tired formula that has since seen it’s days and has never grown beyond mobile devices. Even with all of this going against it, developer Flippfly was able to revitalize the endless runner and add a twist to it in order to bring fresh and innovative ideas to a seemingly dead genre.

The basic premise of RTS is quite simple, last as long as you can by trying to keep up with the setting sun. Once night comes, your ship powers down and the game is over, whether or not you even manage to make it to nightfall exploding into a million pieces will depend on your skill level. There are multiple zones and powerups that you can nab on your doomed quest to reach the end of this world, and each zone features thematic obstacles for you to overcome. You’ll reach breakneck speeds and need to make snap decisions on optimal routes and whether or not use powerups as you navigate the chaos and obstacles of the world that surrounds you. Where Race The Sun truly innovates, is by adding in powerups, missions and experience for you achieve Much in the same way that Borderlands revamped the FPS genre by incorporating RPG elements, Race The Sun innovates and creates and wholly different experience than previous endless runners have done. By creating missions for you to accomplish, they further fuel the fun, challenge and “one more time, I swear” mentality that permeates endless runners. By incorporating levels and various powerups and upgrades for your ship, can you select which kind of playstyle that you’re going to go for, whether the slow and steady burn that allow you to stay in the shadows longer, or the explosive, quick-thinking, power-up centered build that has you jumping and flying all over the map as you attempt to navigate the multitude of obstacles that dot the landscape.

The level design is procedurally generated with static and predictable structures, such that you’ll know what to expect, but whether or not you’re sharp enough or quick enough to adapt to the changing environments that make up each zone is up to your build and your skillset. As you progress in the game, you’ll make it through and survive almost impossibly structured levels that really give you a real sense of accomplishment, until you brick yourself right into the broadside of a cube. By creating a procedurally generated levels that are filled with known structures that have certain functions or layouts, Flippfly creates a game that walks the fine line between chaos and control. The player has complete control over their ship, and their ability to look into the horizon and plan out possible escape routes will determine if they survive the next wave of obstacles. There are powerups that will help you on your quest to stay alive as long as possible, such as a jumping powerup that will allow you to take to the air and avoid all of the obstacles on the ground below you, until you come crashing down and run into a giant sphere or a powerup that reverses the flow of time around you so that the sun backs up further into the sky and allows you a little extra time.

The missions and leveling in Race The Sun is what sets it apart from other endless runners, the missions are appropriately ramped up and teaches you how to be a better player and manages to keep you on your toes. I often find myself bored with endless runners quite quickly, as there’s no real point to them other than to get a high score. I found myself continually returning to Race The Sun, because each of the challenges presented was definitely accomplishable, I just needed to focus a little more and try a little bit harder. Challenges range from simple, finish Zone 2 without getting hit to keyboard breakingly heard(get to Zone 3 using only the right arrow key), but each of them are fair and are accomplishable with enough practice and persistence.

The one problem I had with the game, was also the one shining aspect of the game, the missions. Too often, I felt a need to complete the mission and didn’t take the time to enjoy the game for what it is and see how long I could last until I eventually powered down. This is a side effect of having missions in the game, and whether or not this is detrimental to the game remains to be seen. For me, I was extremely focused on finishing the mission and didn’t take as much time to really just fly around and delve into as many zones as I could. This could have easily been circumvented by creating missions that asked you to stay alive for 3 minutes without dying.

Race the Sun manages to bring fresh life into what I thought was a tired, overly simplistic genre that was only fun to play on the elevator ride up to my office on my phone. By creating a twist to a tried and true formula, Flippfly has crafted a very strong and addictive game that comes complete with a unique graphical style and thumping soundtrack. With additional game modes such as Apocalypse and user created worlds, you’ll keep coming back for more.

I also had the chance to play their DLC entitled, Sunrise. It turns their endless runner formula on it’s head and focuses more on the experience and exploration that can come out of a procedurally generated world. The graphics are stunning and the environment is breathtaking. I’ve attached a single gif below, as I don’t want to ruin your experience of it, should you choose to purchase it.