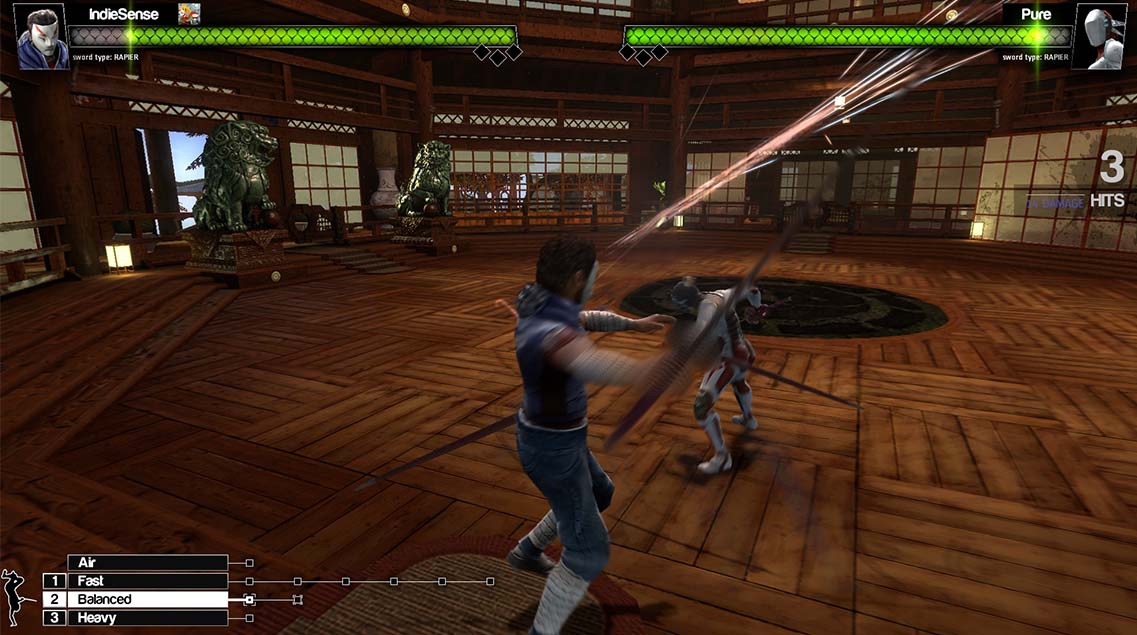 Blade Symphony is not an easy game and does not advertise itself to be one. It’s focused on customizability and variety, with multiple movesets available, depending on your choice in character, choice of weapons and how you handle the available stances that are given to you. I spent my first couple of fights being hopelessly beaten down, pounded, sliced, diced and knocked around, but as each fight wore on and I challenged more and more people, I felt myself gradually improving. Strategies and maneuvers weren’t as effective anymore, and I slowly started evolving and changing my fighting style based on the strategies and habits of my opponent.

I’ve never been one for fight games, save for Super Smash Bros Melee, mostly because the skill ceiling always felt too high for me to play on an adequate level(with adequate meaning, no button mashing and spinning the joystick in random directions). I walked into Blade Symphony with a bit of apprehension, while the concept seemed rock solid and the game extremely well thought out, I was ready to get trounced by any half decent player(or computer) that I went against. I’m proud to say that it only took me a full 45 minutes to make it through the last stage of the tutorial. With that said, I felt like after struggling against an AI-controlled opponent, I was more than ready enough to beat down any human opponents that dared crossed my way.

I was dead wrong. My first couple of fights against a human opponent ended in my complete defeat, and that was just the nature of the game. A whole host of different factors came together, which stance you should be using, how you should be using the environment around you, which attacks to string together and when you should charge your attacks, among many other small subtle factors that ultimately ended a resounding loss for me. The gameplay for Blade Symphony is simple enough, you can run, jump, dash, dodge, and there are three different stances that you can assume when fighting(a quick one for fast attacks and less damage, a balanced one that gives you moderate speed and damage and an extremely slow one that will decimate your opponenets health bar). This is then combined with various characters and various swords that the character can wield, creating many different attacks and styles as you iterate through different combinations. This allows for a level of nuance and customization in the game that you can enjoy, both in choosing how your characcter looks and their attack patterns and behaviors. In a fight, you’ll face off against a wide range of opponents that have different preferences for stances, characters and weapons, and it’s this variety that keeps the game fresh and exciting. All of these factors meld together to create an extremely nuanced and adaptive gameplay that ultimately leads to a rewarding and extremely difficult experience.

What I loved about playing Blade Symphony is every single crushing defeat that I went through. Each defeat created a basis for me to build my strategy off of, you’ll learn and adapt to each opponent as they rush towards you. Some opponents choose to hang back and charge their heavy attack, while others try to smother you with a barrage of quick shots, and all of these strategies have their own strengths and weaknesses. The more you play, the more you start to figure out strategies in order to counter your opponents. It’s not often that I can play a game and feel myself getting better as I play, but with Blade Symphony, my battle prowess grew every match, whether it was victory or defeat. There’s nothing more satisfying than being able to smother your opponent with a deadly combination of quick attacks, then fall back and time your heavy strike perfectly.

As much fun as the gameplay is, Blade Symphony suffers from an extremely glaring flaw. The entire game is played online, there isn’t a single player story mode, and fighting against bots isn’t nearly as satisfying as playing against a human(their overall strategy doesn’t change all that much). The game is purely an online only experience and it suffers the trap that many smaller developers fall into when creating online-only gaming experiences, a dwindling community. The community for Blade Symphony is tiny, and I had trouble finding any servers to join. Luckily I started playing when there was a sale going on, so there was an influx of players to play against. The gameplay and mechanics are extremely polished, but the biggest issue with the game is it’s lack of an online community. I logged on a couple weeks after the sale was on and there were at most five people playing. Barring a sudden resurgence in popularity, I’d have to recommend passing on this one.