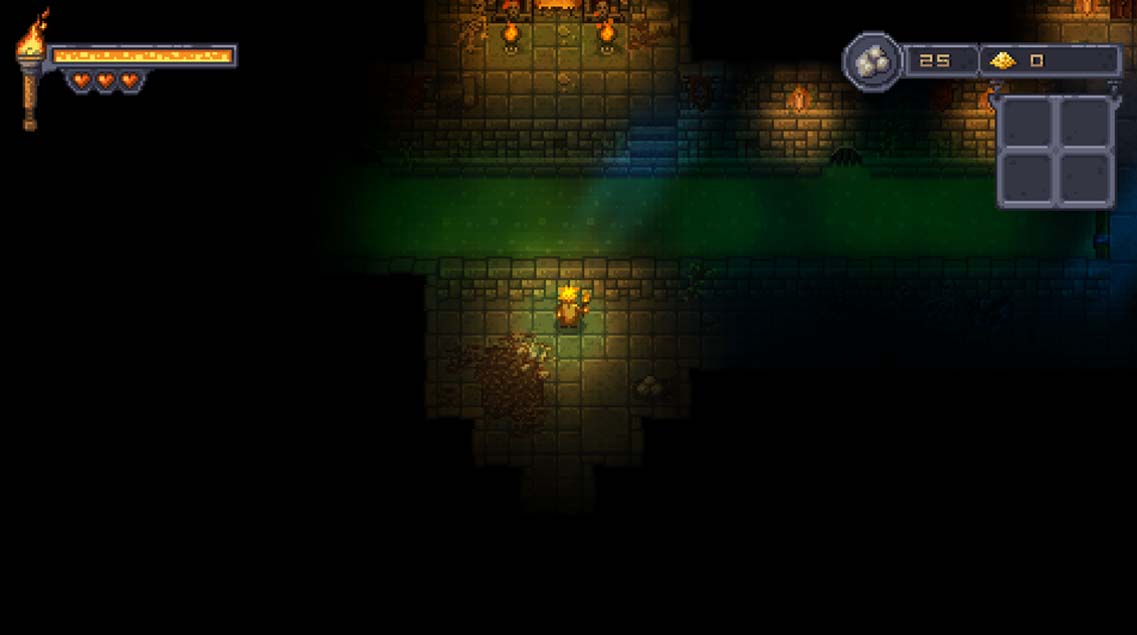 Courier of the Crypts

Courier of the Crypts is an atmospheric puzzle adventure game, that will have you illuminating your way through level after level of dark, dingy crypts, with danger lurking around every corner. All you have with you is a magical lantern that will illuminate your way to safety, and whatever items that you’ll find laying around on the floor. You’ll be accosted by numerous enemies and traps, and only careful maneuvering will allow you to safely make your way to the exit. What sets Courier of the Crypts apart of the hum drum of indie games that fill the Steam marketplace, is it’s excellent use of darkness to convey the dangerous and cramped environment that you’ll be exploring. This sense of danger and adventure is driven home by an excellent use of dark and light, with only a dim light source for you to navigate your way through the level. The environment that Courier of the Crypts portrays does an amazing job in immersing you into the dank underground, filling you with trepidation and a sense of vulnerability.

Gameplay in Courier of the Crypts is an interesting affair that reminds me of playing the original Zelda games. Courier of the Crypts is a game that centers more around exploration and puzzles, rather than combat. When looking at Courier of the Crypts as an adventure game with puzzle elements, we’re given quite a bit to work with. You’ll explore a large array of environments that have been masterfully crafted, with puzzles working in conjunction with the environment to expose you to almost everything that the world has to offer. Not only are puzzles interconnected, to provide a chain of rooms that you’ll need to complete, all puzzles feel as if they were created with a sense of cohesiveness in mind. Each puzzle doesn’t feel like a self-contained room that the developer made, it feels like a cog in a well-oiled machine that contributes to the overall experience of the level. On top of a puzzle system that encourages deep exploration, there are multiple secrets that dot each level, that will have you breaking windows, pushing buttons and looking for false walls. With all of this in mind, there are a few flaws in Courier of the Crypts.

With darkness being such a major element in Courier of the Crypts, proper level design and puzzles would be paramount to it’s success. Poor execution on either part would lead to an extremely frustrating experience that will leave the player wandering around in circle, wondering if they missed a doorway or a puzzle. With that being said, it’s extremely surprising to me that I had an enjoyable time solving puzzles and making connections between the different rooms with ease. When I first booted up the game, I was afraid that I’d spend half of my time looking for a room that I somehow missed, but this only happened on one occasion. While I found the puzzles a little on the easier side, their design was solid and at no point was I too frustrated to continue on with the game.

The biggest issue I had with Courier of the Crypts, is that the combat system was extremely lackluster. Your main weapons are the various stones that you’ll find around the level, which you’ll use to throw at whatever poor enemy comes your way. For a game that seems to enjoy spawning the amount of enemies that it does, the stones and combat system don’t seem to support the experience that the developer had in mind. While there are a few weapons that you can get your hands on, my favorite being the molotov cocktail, the stones are a staple to the game, and their dark design doesn’t seem to fit in with the aesthetics of the game. This is compounded with how stone throwing feels largely ineffective, with enemies hardly reacting to each hit. While this may have been a design choice by the developer, to have the stones feel ineffective and driving home how helpless you are, I felt like the stones were either an unnecessary addition to the game, or didn’t pack enough of a punch to feel like they’re actual weapons. I even did a couple of levels without throwing any stones at enemies, and was rewarded with an exhilarating experience, where I try to dodge around the various enemies that littered the dungeon floor.

Courier of the Crypts is an interesting game with it’s own unique art style. While the combat leaves something to be desired, the environment that you explore more than makes up for the lackluster combat. I do want to take the time to say, that while the typical combat system isn’t well-fleshed out, the boss fights were rewarding and adequately difficult. Courier of the Crypts beautiful graphical style and sound level design make it an easy game to recommend. It’s currently out on Early Access on Steam, with more content on the way.