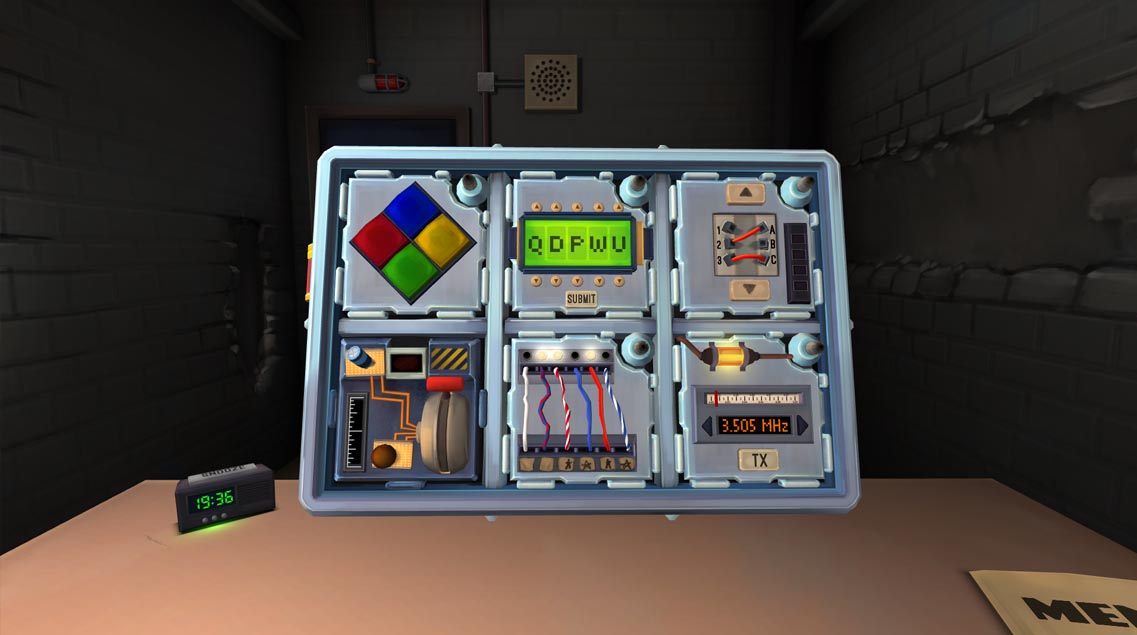 Keep Talking and Nobody Explodes Review

KTaNE is a game that centers around two things, communication and teamwork. While the draw of the game is defusing a suitcase bomb that would fit right into a CS:GO game, the fun part of the game aren’t the minigames that you need to complete to defuse the bomb, the fun part of the game isn’t even when you successfully defuse a difficult and convoluted bomb. Rather, much of the joy that you’ll derive from playing KTaNE will center around effectively communicating with your team in order to efficiently dismantle the bomb as quickly as possible. This will hold true for the first couple of levels, once you start your foray into the more difficult ones, much of the enjoyment stems from an ordered and logical pecking order to a devolution of screaming, shouting and mounting pressure as the time ticks inexorably downward.

This is not how you play. Please last longer than this.

Bomb defusal is done with a single computer running the game, and (hopefully) an army of friends that are armed with the bomb defusal manual that’s available online. The defuser will need to work quickly and communicate effectively to the defusal experts, in order to describe the various minigames and puzzles that are located on the suitcase. The defuser will have to call out what they see to the defusal experts and the defusal experts will then use the manual in order to to tell the defuser what buttons to press, or what wires to cut. Even the simple challenges have a dark underbelly to them, as you’ll be prone not only to human error when reading the manual, the defuser may just not be paying enough attention and make mistakes. Many of our sessions ended up with this conversation piece:

As you run into more and more advanced mini-games, you’ll encounter both difficult and semi-ambiguous puzzles that will have you reenacting the class “Who’s on first?” Act with your teammates.

“What does the label say?” “Blank” “Wait, blank as in the word ‘blank’ or like there’s nothing there?”

KTaNE is an extremely fun and hectic local multiplayer game that will have you rejoicing with your teammates when things work out, or cursing their very existence when things don’t. It excels in creating a sense of camaraderie between friends, and even complete strangers. While the minigames and teamwork are the core concepts that make the game great, there is one pitfall to the game. While the puzzles are randomly generated each time, both the type of puzzles that appear and the keyword/code/color are, the steps to solving each puzzles are not. This starts to bring in serious issues as your group starts to play the game too much, memorizing the button game isn’t overly difficult, and guessing out the symbol games after a certain point isn’t too hard either. While the majority of the game can’t be solved from memory, as the number of rules is much too high, certain aspects can be sped through quite easily. Luckily, the developers have worked around this issue by modifying the bomb defusal manual with periodic updates to keep things fresh. On top of that are the introduction of needy modules that you’ll need to continually fix and reset throughout the session to keep the bomb from blowing up.

All in all, KTaNE is a great local multiplayer game(and can even be played through Skype) that’s a lot of fun to play with, either with existing friends or with a large number of strangers. You’ll forge bonds, make game-ending mistakes and potentially ruin some otherwise great friendships. I’ve long since decided that playing with my girlfriend and I would be a horrible mistake that would lead to long-term damages and deep emotional scars. Other than that, if you’re looking for an extremely fun and hectic game to play with your friends, whether they’re the type of people that enjoy playing games or not, KTaNE will certainly fit the bill.