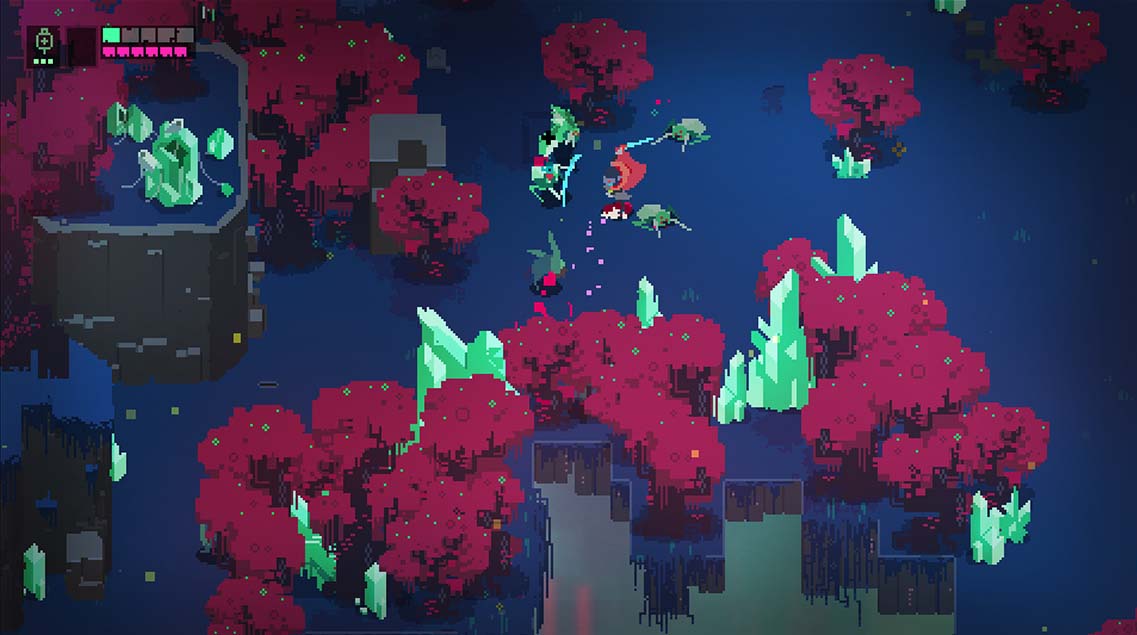 One of Hyper LIght Drifter’s greatest strengths, is the world that is has managed to craft and create. Not only is it beautiful to look at, the environments are incredibly detailed adn you’ll find small stories hidden around every corner. You’ll find abandoned camping grounds overrun by monsters, its previous inhabitants belongings strewn across the map, and large, imposing machines and golems that have long since been defunct. Each environment that you explore has a hidden story to tell, and this may be Hyper Light Drifter’s strongest points. Hyper Light Drifter is able to create stories and relay them to the player without words, letting the players explorations and the environment organically create a story in their own minds. Not only is there an overarching story, the world is chock full of small scenes that add to the atmosphere of the game. When combined with a unique art style that brings the world to life, Hyper Light Drifter manages to mix both art and narrative together into a flawless experience.

While the world of Hyper Light Drifter is beautiful and a joy to explore, player are reminded around every bend and turn that the world is much more than just eye candy. The enemies that populate the world are varied and deadly, each with unique attack patterns and overwhelming numbers. Hyper Light Drifter’s combat isn’t merely difficult, the sheer number of enemies spawned, their unique attack patterns and dangerous mix of close combat and ranged attacks, means that the game is absolutely punishing when you make a single mistake. You’ll need to constantly be cognizant of all the enemies on the screen, their preferred methods of attacking and how you can mix your dash and combo attacks in order to dispatch them while still somehow managing to stay alive. While I enjoyed the punishing combat of Hyper Light Drifter, one issue that continued to crop up for me while I played the game was that the combat didn’t feel smooth and organic. This stands in stark contrast with all other aspects of the game, where everything was polished to a perfect sheen. While the combat mechanics may have been a design decision in order to restrict player movement and retain the difficulty of the game, I never felt that the combat was organic and seamless.

The way that dashing mechanism is integrated into the game, along with the way that enemy behavior and attacks are introduced, combat feels like it should be a fast-paced affair, with near misses, close calls and either overwhelming triumph or crushing defeat. After playing Hyper Light Drifter for awhile, I started to realize that combat is a much slower affair than what I expected, and while I did eventually get used to this change, the cooldowns between actions was something that I had trouble getting used to. For example, you’re unable to slash your sword right after a dash. This led to multiple deaths on my part, where I’d purposefully dash towards an enemy right before they attack and try to slash at it, but was unable to due to the cooldown. While this led to different strategies where I’d dash in the vicinity of an enemy, dodge their initial attack and counter afterwards, the pace of the game was slowed down significantly.

With that being said, the combat for Hyper Light Drifter is decent and holds well throughout the life of the gameplay. While I expected and would have enjoyed combat mechanics that were much more fluid, I’m sure that the limitations and cooldowns were a result of much fine-tuning and tweaking by the developers. Heart Machine has been incredibly responsive to the community that’s grown around Hyper Light Drifter, with multiple patches and modifications to the gameplay and combat mechanics in an effort to make the game easier and more accessible to players.

Hyper Light Drifter manages to create an expansive world that’s a joy to explore and filled with deadly enemies and entertaining combat. I’ve gotten lost in the world and wandered about, as I tried to uncover as many secrets as I could. The game inspires a sense of wanderlust in you as you explore the world that the game has to offer. I can’t remember the last game that I played where I had such an enjoyable time running into dead ends and slashing random walls in order to seek out hidden rooms and uncover snippets of scenes from long passed adventurers that were doing much the same as you are.

Hyper Light Drifter conveys a sense of wanderlust, whets your pallette for battles against an overwhelming amount of enemies and will have you roaring in triumph after concluding an especially difficult boss fight. The world that it creates, the stories it tells and the calm and calculated combat that it inspires bring the game to be much more than just the sum of its parts.