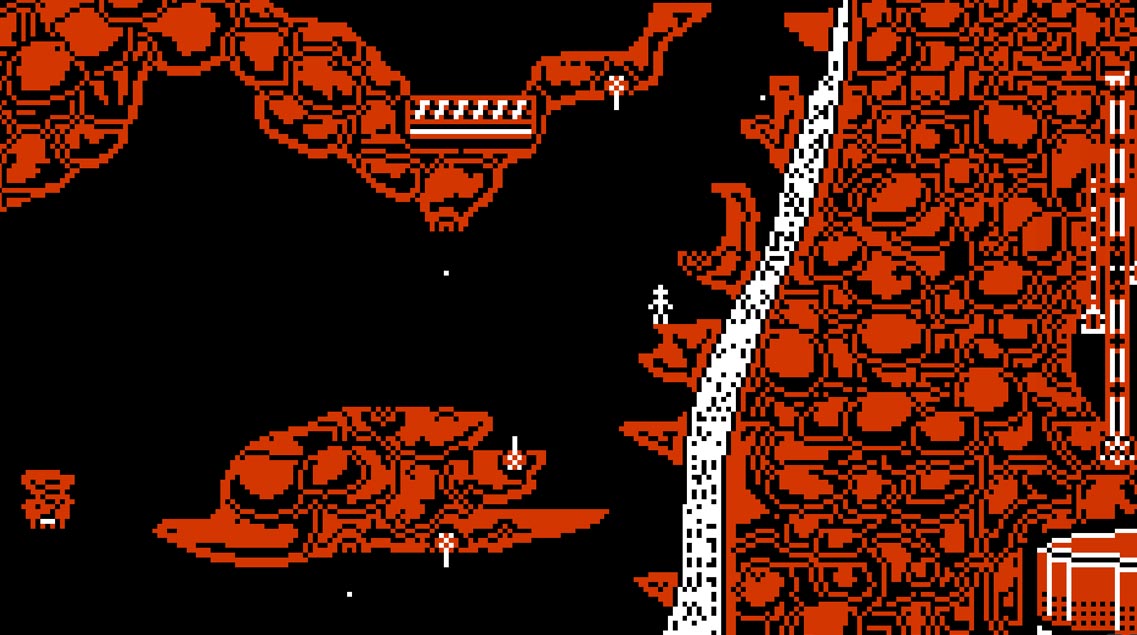 From exploring the Cube Sector with Lyle to bouncing around the world in Within a Deep Forest, 2D platformers have been a staple in indie gaming history. New games are continually released in the genre that continually refine, perfect and innovate on an already successful formula. kuso is a new entry to this tried and true genre, in which Fred Wood tries to improve on his already successful and quite charming previous release, LOVE.

kuso is a simple game, with simple mechanics, with the only innovation being a checkpoint that you can place anywhere you want. Simple isn’t easy, and when it comes to kuso’s design, it’s obvious that a lot of love and care went to how your main character controls, and how he interacts with the environment around him. You’ll explore the 25 levels and die agonizing deaths in almost every single level. Every level that you enter has been meticulously crafted to bring forth a new unique landscape and a new unique way for your body to be vaporized, shredded, chopped in half, burned or any of a dozen other ways that you can meet your doom.

My favorite part about kuso is the extremely detailed and nuanced level design. Every level feels fresh, every environment you trek through emanates its own special form of danger and the simplistic color palette stands in stark contrast to the complex and detailed environment and traps that you run into. One of the most rewarding things about playing through kuso for the first time, is discovering what the next level looks like, and what fresh way your character will die. Fred Wood has done an amazing job at balancing imminent danger with safe spaces, which you’ll relish, as that’s the only place where you’ll be able to set your next respawn point. Arcade mode brings in an interesting dilemma, where you’ll sometimes miss a platform and fall straight down to the beginning of the level. Obviously, it’s much faster to die and respawn to the last checkpoint that you set, but it also decrements one of your lives. It’s an interesting tightrope that you have to walk, where you have to balance speed over safety.

Another big aspect of the game how it enables you to enter this zen state, where you’ll enter a mode where you’ll find yourself continuously moving without stopping, barely dodging big saw blades flying at you, or narrowly landing a jump next to a bottomless pit. These moments remind me a lot of the levels in Super Meat Boy, where taking your time to try and get the timing right for a level would oftentimes make it more difficult for you to proceed. In much the same way, continuously moving to the rhythm of the game allows you to figure out the correct timing much easier. That is, until you forget to put down a checkpoint, die and restart at the beginning of the level.

When I talk about the rhythm of the game, I’m talking more than just about gameplay, I’m also talking about the soundtrack. The soundtrack of kuso is amazing, with unique tracks for every single level. What’s even better is that the levels are synced with the soundtracks. Gouts of fire will shoot out from the ground in beat with the music, and if you manage to keep your jumps in time with the beat, you’ll have an easier time getting through each level.

The amount of details and love that’s put into kuso is astounding, and I can’t recommend it enough. For your first run through, I highly recommend you play through the unlimited mode, as the regular arcade mode is difficult enough where there is a 95% chance you won’t pass on your first playthrough. My first playthrough was on arcade (only 125 lives) and I was thoroughly slaughtered by level 19.