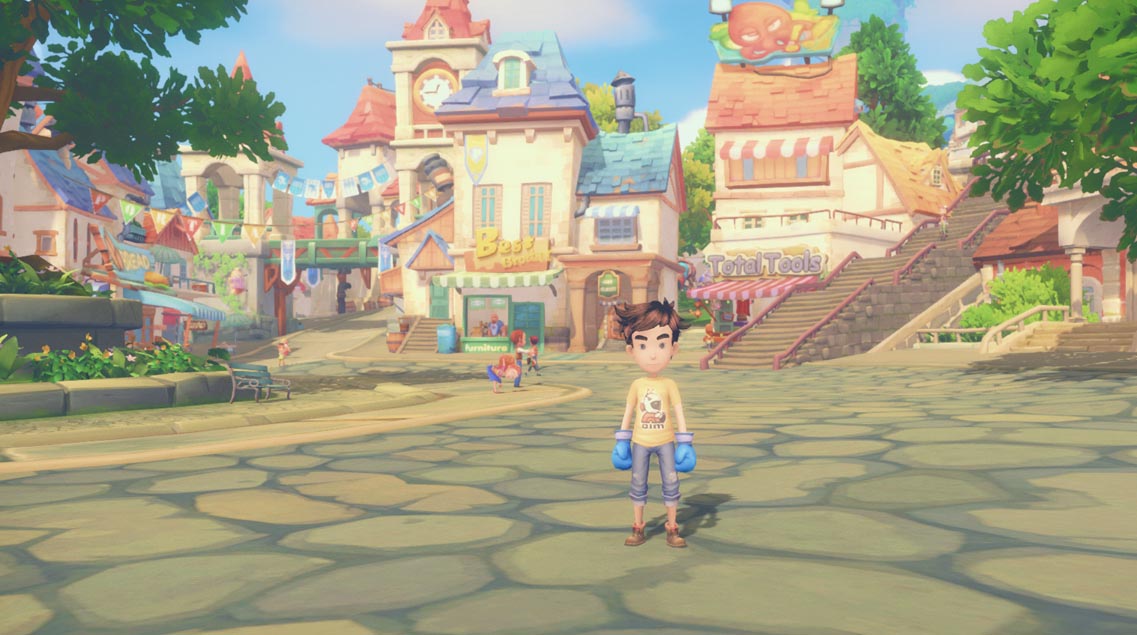 My Time at Portia Review

Reviewing Early Access games is tricky, as I’m just reporting on the snapshot that I experience at the time of the review. The game can get better, or it can get worse depending on how developers interact with the community and how often changes are pushed out. All too often Early Access games show a promising future, but are left in a limbo state for years until their eventual “release”. In the interest of keeping my review of My Time at Portia useful for future iterations of the game, I’ll focus on the core gameplay, high level concepts that it explores and the developer’s interactions with the community.

There’s something about playing life simulators that is extremely soothing, maybe it’s the fact that there isn’t much of a time pressure for you to complete objectives, or that your tasks for the day are subject to your own whimsy. Either way, games such as Rune Factory or Stardew Valley are calming to play, as you’re able to do whatever you want, whenever you want. My Time at Portia is a fresh entry into this genre, and I’m hoping that it brings something fresh into the mix.

When I first started up My Time at Portia, the first thing I noticed was the bright and colorful environment, with waves of grass, an expansive sea and derelict ruins in the background. The game looks and feels welcoming, akin to wanting to wrap yourself in a warm blanket with a mug of hot chocolate in front of a fireplace. The graphics set a wonderful tone for the game, it feels like a game where you’re supposed to take your time, smell the roses, chop down some trees and explore everything the environment has to offer. The different areas of Portia feel very distinct, but never lose that warm fuzzy feeling that you get right when you enter the game. Games such as these live and die by the world that they create, if the world doesn’t feel unique or presented a disjointed experience, your immersion is lost. In particular, games such as Harvest Moon or My Time at Portia are entirely dependent on creating the right kind of environment and the right kind of world. These are games where you contribute to the overworld, and any loss in immersion breaks the relationship and investment that you have to the world, the town and the people. On this end, My Time at Porta is doing an excellent job with creating the right kind of world.

While the graphics for My Time at Portia do a great job at immersing you into the game world, there are other factors that start to chip away at it. While there are many factors that contribute to an immersive game, there are four major factors that I look at, graphics, sound, dialogue and animation. Any fault in any of these factors break the overall experience of the game. For My Time at Portia, the graphics and sound are top notch, the overall feel of the world, combined with the music and sound effects creates a wonderful experience that fits the overall theme of the game. Cracks start to appear when you look at the dialogue and the animations of the game.

When looking at the dialogue, and especially the voice acting, it leaves quite a bit to be desired. The conversations feel more transactional, rather than conversational or in some cases, there doesn’t seem to be a point in the conversation at all. Characters will talk about topics that are completely unrelated to the situation at hand, or in some cases they won’t say anything. This is compounded with the middling voice acting, and while I appreciate the effort of having voice acting for a large majority of the characters, the voice acting takes away from the experience, rather than adding to it.

Besides the less than average dialogue and middling voice acting, there’s still some work that needs to be done when it comes to animations. Currently, some of the animations feel jerky and robotic, while other animations feel natural and fluid. There’s such a varying band of quality that the animations fit in, and the combination of you smoothly punching a ladybug and the ladybug’s jerky reaction to getting hit is more than enough to break your immersion in the game.

When looking at the gameplay for My Time at Portia, I’m of two minds about it. For one, it does get very addicting, very fast. In the same vein of Rune Factory or Harvest Moon, it gets so easy for you to want to jump back into the game and collect just a bit more resources. Or take another shot into diving into ruins to gather more rare materials. The crafting system is simple to use and makes it easy to continuously build more and more items, resources and buildings. The gameplay reminded of a lot of Starbound back when it was Early Access. It was extremely easy to get sucked into the game, as you spent much of your time exploring, mining and going back to build new weapons, improve old ones and beat up monsters.

In My Time at Portia, I found myself doing the exact same thing. I would continuously do runs of beating up townspeople (to get money), running into the ruins, collecting more materials in order to build out my house, upgrade my weapons and complete quests. While this does seem like a bit of a grind, and a little bit boring, I found myself more than ready to jump into the world, and extract as many resources as I could from it. Outside of the crafting, mining, collecting and pillaging the land for resources, you also have relationships that you need to balance with the townspeople. You can talk to them, give them gifts, playing rock paper scissors with them or have an all-out brawl for money. Relationships in My Time at Portia are also a fun thing to balance, and you can choose to invest as little or as much as you want. You’ll be able to upgrade your relationships with everyone around you and once your relationship with them is high enough you’ll be able to obtain perks from them. This is quite nice, as it incentivizes you to build relationships with everyone around you, unlike in games like Rune Factory 4 where I’m just looking to build relationships with the one person.

On the other hand, the game sometimes does feel grindy, and this is a side effect of how you create new resources. Resources take time to process and it gets a bit time consuming to actually craft items because of this bottleneck. Bronze bars, for example, take a while to process and if you want to process more than 10 of them, it takes more than a day for you to actually get going. While I do get that they’re trying to simulate the production time it takes in real life, it feels like an artificial bottleneck to slow down the pace of the game. There’s nothing more frustrating than having enough of the raw materials to finish up the quest, only to have to wait for item upon item to finish being processed. While you can easily process resources proactively, and have the machines churn and work while you’re exploring, I feel like this isn’t a feature that adds to the game. Outside of the bottleneck, I only have a couple of middling issues with the game, the ruins are fairly boring and empty and the days are way too short.

While there are just as many complaints about the game as I have compliments, I’m not particularly worried about it for now. The game is still in Early Access and there’s still a lot of room for improvement. The developer is extremely active in the community and has been continuously releasing patches and upgrades to the game. In terms of the dialogue, I do want to take the time to point out that this is a Chinese developer, so translations being off are excusable. Overall, My Time at Portia shows a ton of promise, the gameplay is addicting, the graphics are superb and there’s nothing else better than beating up the town doctor to fund your next expedition into the ruins.