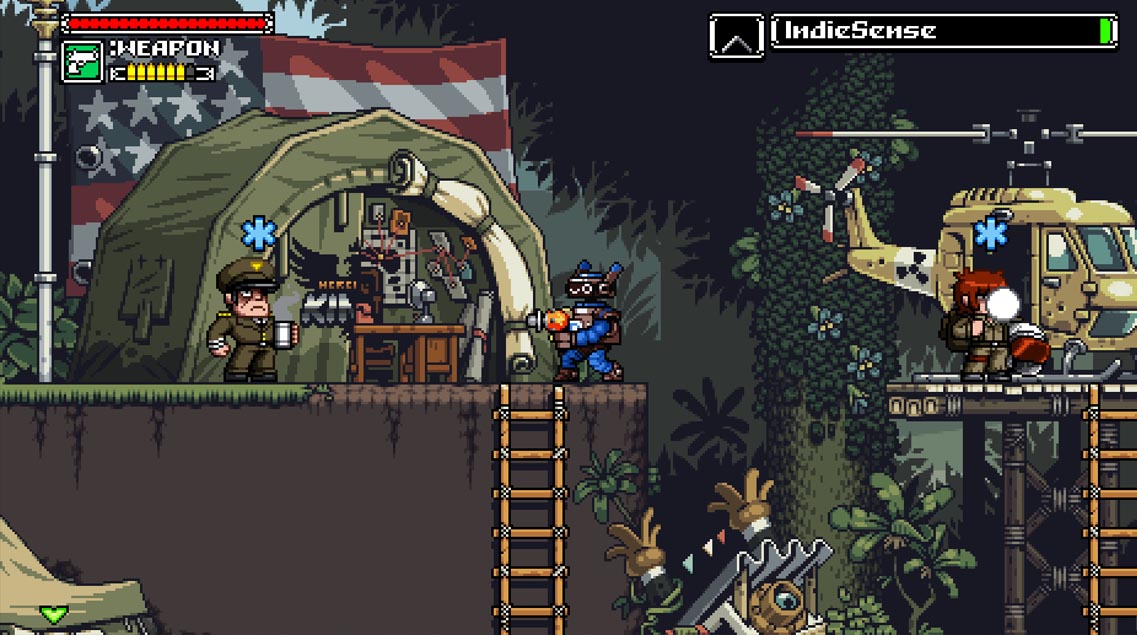 There isn’t a shortage of indie games on the Switch, especially with Nintendo now openly embracing “Nindies”. I hadn’t heard the news that Mercenary Kings was coming out on the Switch, but when the opportunity came to review it, I couldn’t pass it up. I’ve played Mercenary Kings at length on my PC, and while I loved the game, the beautiful graphics and the gameplay, it wasn’t without some serious flaws. With the release of the Switch version of Mercenary Kings:Reloaded Edition, I was more than a little excited to see what new features were added to an other wise fun but flawed game.

Mercenary Kings reminds me, and pretty much everyone else, of Metal Slug. Everything from the beautifully detailed pixel art, to the gameplay, to the way that bullets look, are very reminscent of any of the Metal Slug games I played way back when. With this, I approached the game like I approached any other Metal Slug game, I rampaged in, shot everything I could and tried to dodge everything coming at me and eventually ended up dying quite quickly. On the surface, Mercenary Kings looks and feels like Metal Slug, the gameplay is a little slower and reminds me of playing Megaman rather than Metal Slug. Combat in Mercenary Kings is slow and methodical, every enemy has an attack pattern, and if you approach levels in the right way, you’ll be able to come out virtually unscathed. It’s much smarter to move forward slowly and surely, rather than running into new areas and winging it, as the enemy design is quite varied and you’ll be attacked from multiple directions and end up getting skewered, shot and electrocuted all at once.

The levels that you’ll be roaming around are very wide and opend-ended. You can approach the levels from a multitude of directions, and the way that you decide to tackle a level is entirely up to you. One thing to keep in mind while you are roaming around a level is that enemies will respawn once you leave the screen and they’ll respawn in the same location. This is an interesting game design choice, as the game gets increasingly hectic as you move back and forth from such an open-ended level. These open-ended levels are both a blessing and a curse, as you’ll have an opportunity to explore every nook and cranny of a level, but you may be frustrated with having to face the same set of enemies in the exact same attack pattern over and over again as you end up backtracking. Another factor that makes this a little more annoying, is that you’ll be replaying the same levels over and over again, but with different objectives in mind. While this does allow you to optimize your runs, it does get a little annoying if you’re looking for more variety when you play.

There is no concept of leveling up in Mercenary Kings, you character won’t move faster, shank harder to shoot faster on their own. Leveling up in Mercenary Kings is akin to “leveling up” in The Legend of Zelda. You don’t necessarily get stronger, but you do get access to more weapons and with these weapons. Mercenary Kings has another dimension to it outside of the standard shooting platformer, you’re able to customize and upgrade various parts of your gun that fit your playstyle. There is a huge variety of parts you can upgrade, that drastically change how your gun operates. One of my favorite things to do, is to create an obscenely strong gun that only has two bullets, but you can craft and customize your gun exactly to your preference. In order to craft new parts, you’ll need access to two things, money and parts, and both of these can easily be gathered while you play through your mission.

When I first played Mercenary Kings, I had a list of complaints that made the experience suboptimal, and while I loved playing Mercenary Kings, the issues were big enough that it detracted from the overall experience. With the release of the Reloaded Edition on the Switch, Tribute games has managed to introduce a ton of quality of life updates that has turned Mercenary Kings from good to great. One of the big issues I had with Mercenary Kings, was that while the levels were very large and open-ended, it was hard to figure out where your objective was. For example, one of the first missions you do will have you run out and kill 8 specific types of enemies. Imagine my frustration when I killed 7, ran around the levels for another 10 minutes and wasn’t able to locate the last one. It was experiences like this, where gameplay dragged on longer than usual and an artificial difficulty was introduced into the game that affected the fun that I had in game.

Another problem was that while weapon crafting and customization was one of the defining features of the game, you had to farm an obscene amount in order to obtain the right materials from enemies in the game. Since enemy drops are randomized, you ended up running in circles trying to get the correct spawn that you needed. With the release of the Reloaded Edition, there’s now a minimap for every mission that tells you were you need to go, and they’ve introduced a shop where you can exchange money for items. These two fixes addressed all of my big issues with Mercenary Kings, and this doesn’t even take into account the new guns, knives and two new playable characters that they added.

I’m of the opinion that the definitive version of Mercenary Kings is on the Switch. Every mission is bite-sized, and you should be able to complete any mission within the time limit, so if you’re playing on the train, during your commute or a long car ride, the length if perfect. Added to the fact that the game is quite deep, especially with the customizations that you can choose, Mercenary Kings on the Switch is an easy game for me to recommend for you to pick up. The beautiful graphics, smooth gameplay and multitude of guns make this a must have on your Switch.