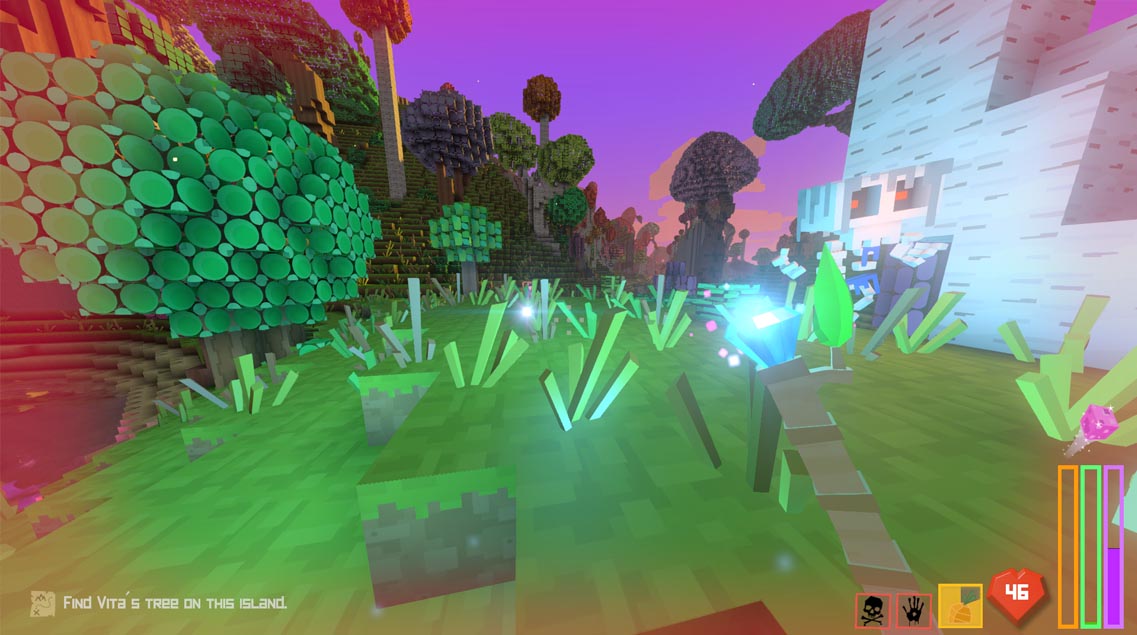 Rogue Islands is an FPS Roguelike that will have you exploring islands, crafting spells and blasting anything that dares to look your way. While it may look like Minecraft, Rogue Islands is completely cenetered around fast paced, frenetic combat.

I’ll admit that I didn’t come into Rogue Islands with the highest of expectations. The voxel art style has been played out and reminds me of all the horrible Minecraft clones that came out after Minecraft’s breakaway success. I’ll even admit that my first run through of Rogue Islands lasted about five minutes before I closed the game to play whatever trendy game had come out that week. It was only on subsequent playthroughs, after I had dedicated some time to get situated with the game, was I able to scrape away Minecraft vibe and really get into the core gameplay.

Rogue Islands is absolutely nothing like Minecraft, and I have to throw that out there because that’s the first thing that comes to mind when anyone, including myself, looks at the game. While it’s hard to dissociate the game from Minecraft, once you get into the game, you’re immediately pulled into the whirlwind of action that it introduces.

Roguelikes are my bread and butter, I enjoy the added pressure of knowing that a wrong move will erase all of the progress that I’ve made. When it came to playing Rogue Islands, I immediately opted to jump straight into the hardest difficulty. I did not realize how bad of an idea this was. After jumping into the game, my character was almost immediately hungry. Undeterred, I immediately set about scrounging around looking for something to fill stomach. It was then that I learned the first lesson of Rogue Islands, make sure you check your surroundings or an angry group of spell-firing skeletons will appear behind you and lay waste to your sorry existence.

In fact, over my next couple of playthrough, I never even made it to my objective. I learned exactly how not to play. The world of Rogue Islands is unforgiving and you’ll be punished severely if you let your attention slack even a little. While I won’t say that it wasn’t my fault that I died over and over again, I will say that the game could do a better job showing you the ropes. It drops you in with minimal context.

My first serious run through Rogue Islands that lasted longer than 5 minutes was met with a lot of frustration from not knowing how the game was supposed to be played. After jumping off the ship, I snacked on a giant carrot and hopped onto the actual island. There I picked up a squash, killed a couple of skeletons and started mining the cliff face ahead of me. After a couple minutes of this, I realized that I’d need to eat or my character would start taking damage. Knowing that I had picked up the squash earlier, I went to eat the squash, only to realize that I had no idea how to open my inventory. If you open the menu and look at the “Controls” menu, the only options you have to change your controls are how to move forward, backward, left and right. While I do appreciate the fact that I can change that, it does absolutely nothing to tell me how to open my inventory, or where my objective is. Frustrated, I started hitting every letter on my keyboard starting from “Q”, with the hopes that I’d open my inventory at some point. As luck would have it, the inventory button is “Q”. I ate the squash and moved on with my life, afterall I had to find some sort of demon portal, as was evidenced by the lower left of the screen that said “Find Demon Portal”.

I started exploring the islands, which mostly meant walking in circles, and trying to avoid the oncoming fire of poisonous bees, annoying skeletons and trying to avoid walking into patches of poisonous thorns. It was during this period of exploration where I realized that Rogue Islands was an FPS Roguelike, and while that may have been obvious from watching the trailer, the first thing the game emphasizes is the fact that you need to eat and you should harvest some food for later. It doesn’t exactly set you in the correct frame of reference for what the game should be about. Even given my previous couple playthroughs, it never really felt like a roguelike. The setting and purpose of the game was never really clear, the initial objective is a little too muddled for you to gain a clear understanding of what the game is. After realizing how the game fits together, and how to upgrade my spells, my viewpoint of how to play and how to treat the game shifted.

I knew that I needed to find some sort of portal, so I looked for the highest point I could find, and jumped and levitated my way over there. I also forgot to mention, if you hold the jump button while you’re in midair, you’ll be able to float. Guess how long that took me to figure out? About 6 minutes in. During this entire process, I’m being hounded by waves of enemies, and the combat is enjoyable. You have a constantly regenerating magic bar, and every time you jump, shoot or float, you drain your magic bar. This turns combat from blindly shooting at the enemy, to saving and conserving your bullets for when you know you’ll be able to hit them. Or when I did run out of magic power, I used the environment to my advantage, hiding and strafing behind trees while I waited for my magic to build up again. One 1v1 fights, this isn’t an issue, but when you have four skeletons shooting at you, trying to figure out the happy balance between shooting, strafing, hiding, and jumping out of the way creates a hectic experience that will have you on the edge of your seat.

After my eventual massacre of skeletons, I finally made my way to the highest point that I could see. Once I reached to the top, I saw exactly where the demon portal is. I jumped and floated down in the direction of the portal. As I made my way there, the sun started to set, and by the time I arrived at the base of the portal, it was completely dark. Darkness in Minecraft is something to be feared when you’re in your first couple of playthroughs, but otherwise, I’ve always found night time to be more fun than stressful. I didn’t know what to expect from Rogue Islands, but I assumed that it’d have a larger influx of dangerous enemies. This was not the case. Ghosts float down from the sky, find you, follow you and rain fire down upon you. I didn’t make it through 30 seconds after seeing my first ghost before I saw the gameover screen.

My overall experience with Rogue Islands was a positive one, the action was good, I enjoyed looking at the landscape and the core game design was well thought out. With that being said, the game isn’t very friendly to new players, and it may turn away those that may potentially be interested in the game. An introductory mission may be helpful, or even listing out the controls in the Options menu would go a long way. Rogue Islands is a game that has some very rough edges, and while it could do with a little polish, the core gameplay runs like a well oiled machine, and I enjoyed the difficulty of the game. If it’s your first time playing, I highly recommend playing on the Explorer difficulty, as just getting acquainted with the game will take a couple of deaths.