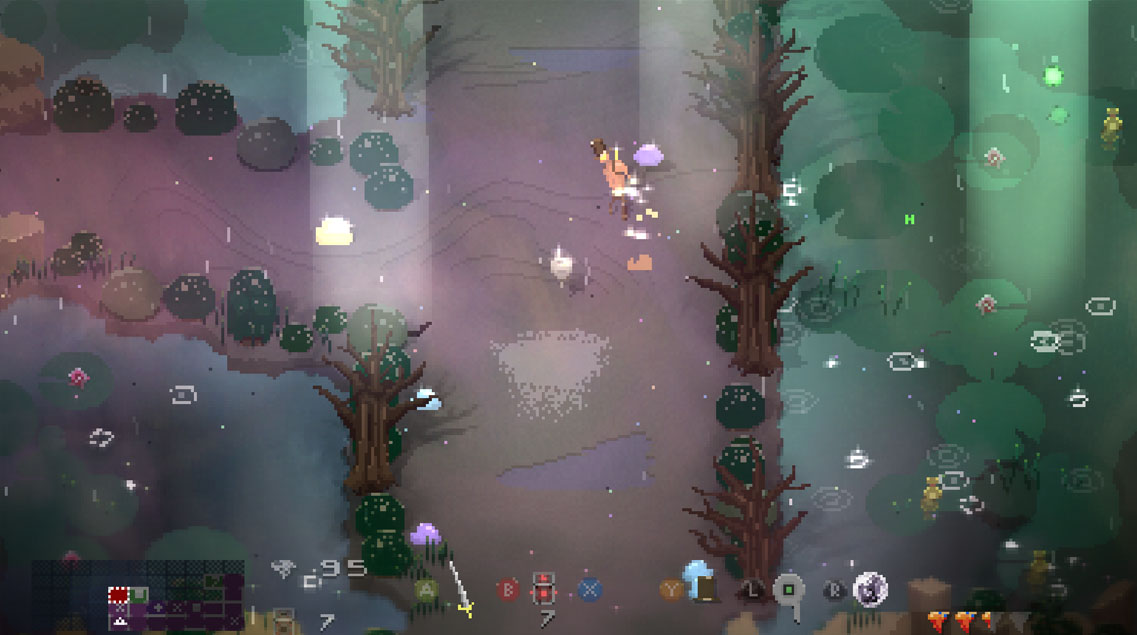 When it comes to developing games, some game developers are subtle with their influences, while others are a little more upfront about it. In the case of Songbringer, you can see how the original Zelda game has influenced the style, gameplay and pacing of it. Songbringer has taken what we love most about Zelda, and added a slew of modern twists to it. From introducing beautifully soft, glowing, lighting effects, a new chunky pixel art style and a procedurally generated world, Songbringer takes in the original concept of Zelda and brings it into the modern age. With these new additions, come in a whole patch of thorny problems that may arise if it’s badly executed. Lighting effects can overwhelm the player, new weapons that differentiate themselves from an already created archetype may be confusing or ineffective or procedural generation is a whole other beast to tackle.

Songbringer has you in control of Roq and his best friend Jib, a no nonsense robot that stands in stark comparison to the loud, snarky and raucous Roq. You’ll travel all over the planet, in search of new technology that you can use to slay enemies, find secrets and wreak havoc over the not so peaceful world that you’ve landed in. Gameplay in Songbringer is very much reminiscent of the original Legend of Zelda game, where you’ll travel through an overworld in search of the next dungeon to delve into. You’ll make your way through the very dangerous overworld in search of your next dungeon. One thing to note here, is that the entire game is procedurally generated, from the map, to the enemy placement, to the dungeon location. In a game that features a mostly open world adventure, where you can enter any dungeon at any time, you’ll occasionally drop into a dungeon that’s way out of your skill level, or make your way through half of the dungeon before being stymied by an obstacle that’s requires an item that you don’t have.

Fighting your way through the dungeon and through the overworld is a trial in and of itself. Making your way through the dungeon requires you to be very careful and precise about your actions. Running straight into an enemy and swinging your sword without thought is an easy way to have half of your health taken down in an instant. You’ll need to be very careful in how you approach, as the game does not hold your hand through any of the dungeons. In games such as these, it’s usually quite easy to isolate a single enemy, dodge their attacks and move onto the next one. If we’re trying to relate the combat to other games, combat in Songbringer, especially in dungeons, play more like Binding of Isaac than The Legend of Zelda. Battles are fast, frenetic, with spells, enemies, bombs, lights and swords flying every which way, and you’ll need to stay on your toes in order to dodge it. Successful combat in Songbringer feels more reactive, rather than proactive. You’ll be better off baiting out an attack and closing the distance and attacking conservatively, than getting up in the enemy faces trying to hack it off. Death and combat in Songbringer will at first feel unfair, there is so much going on, that it gets hard to differentiate what’s friend and what’s fore. After your first half hour, you’ll start to feel more comfortable with the combat. This does bring up one of my issues with Songbringer, while combat is fun, in the thick of battle, it gets difficult to visually differentiate what can hurt you, or in some cases, WHAT hurt you. A great example of this, is that one of the first enemies you’ll meet in your first dungeon will throw a bone at you. The bone is small and hard to make out against the dark backdrop, and I’ve lost more than a couple ticks of health because I couldn’t see where it was or that it had been thrown out. While this is a little bit of an annoying issue, as you play the game more, you’re able to do a better job resolving what’s flying towards you and what you should try and avoid. Changing my playstyle from being aggressive to try to land counter attacks really helped my longevity.

One concern that’s going to crop up about Songbringer is how it uses procedural generation in order to randomly generate the world that you play in. Procedural generation as a concept in gaming, has been around forever, since the days of rogue, and has recently come into vogue. With games such as Spelunky or Rogue Legacy, rogue-likes and rogue-lites have injected randomly generated levels back into the gaming mainstream. Procedurally generated games introduce an interesting concept, in that you can have millions about millions of possible levels into a game, but at the same time, how do you do a quality check that these millions of iterations are all fun? There are a boatload of games that have been released that use procedural generation that were not executed well. When poorly executed, you get games that feel lifeless, empty and start feel more like a slog to get through, rather than an experience. It harkens back to a familiar saying that the game is as wide as the ocean but as deep as a puddle. Even with a large amounts of content, without any real depth to the game, you’re basically running around in a pretty skin without a strong purpose of what to do. We can see how these concerns would be brought up when playing Songbringer, after all, how do you create a game with Zelda style dungeons and overworld, and still bring life to it? Dereky Yu of Spelunky fame went around this by creating parts of a level that worked well, and randomly putting them together. This way you’re able to bring in a little bit of the handcrafted feel of a well designed level, while still keeping the gameplay dynamic and unexpected.

Songbringer uses this same style of generation to create the world, and has been able to pull it off amazingly. While there are awkward placements of enemies and rooms next to each other, the levels and worlds that are generated feel remarkably handcrafted, and are placed sensibly. I’ve generated multiple worlds and did a quick run through of each of them, and the level progression all feels very organic. The layout, pacing and difficulty progression all felt like it was planned. While there may be a concern about the random levels that are generated, and the worry that it feels robotic and apathetic, my experience with playing Songbringer felt like the complete opposite.

I’ve been playing indie games for over a decade and one thing that I absolutely love is pixel art, and Songbringer doesn’t disappoint in this regard. The art direction of Songbringer is distinct, and the chunky pixel look that Wizard Fu went for is cohesive across the entire game. When combined with the modern lighting effects that are scattered on every room, you get this wonderful mix of retro and modern, that work seamlessly together. This is coupled with sublime artwork for cut scenes and bosses, I have to say that the art style for Songbringer is distinct and attractive. There were times when the lighting seemed to be a little much, but rooms like those were few and far between.

Songbringer is everything I never knew I wanted in a modern The Legend of Zelda game and more. It wears it’s inspiration on it’s sleeve and creates an experience that sets itself apart from being just another Zelda clone. The world is chock full of secrets just waiting to be uncovered, and an amazing crafting system that lets you mix a variety of abilities together. There’s nothing quite like being able to teleport a short distance forward and leaving trails of fire in your wake. While there are a couple small annoyances regarding being able to differentiate enemy projectiles, the game is well paced, combat is punishing but fair and the game couldn’t be lovelier to look at. Also, hallucogenic cactuses are probably the best item I’ve ever seen in a game.