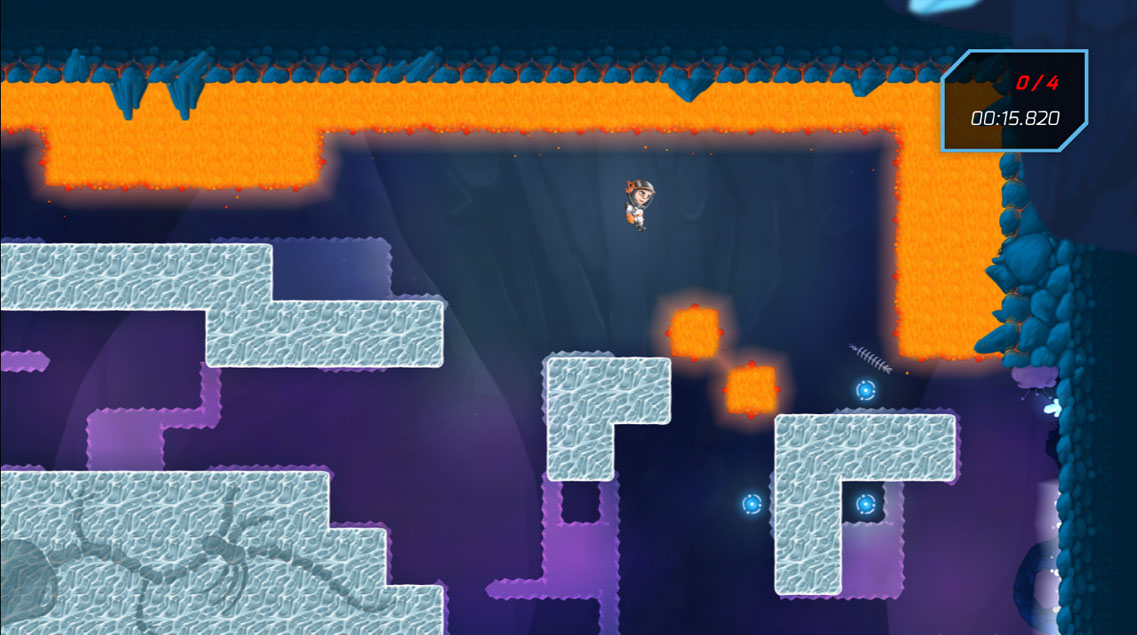 IndieSense Reviews is made up of two different reviewers that had vastly different experiences with Blackhole. We’ll try a new format where the both of us can express our feelings for the game, as our experiences and opinions of the game vastly differ.

A quick overview of the game before we dive into our personal opinion of the game, Blackhole is a physics-based puzzle platformer that prides itself on brain-twisting puzzles that incorporate gravity altering portals that you need to access and traverse in order to explore its expansive world. When starting up the game, you’re greeted with beautifully crisp, colorful graphics that document your crew’s journey to close up Blackholes. Right off the bat, the two of us agreed that the graphics in Blackhole are beautifully animated, and are dripping with eyecandy. It’s not often that you can see this much graphical polish in a 2D indie game, but FiolaSoft has done an amazing job portraying the world as they imagined it in Blackhole. On top of the beautifully crafted artwork, the cutscenes are fully voiced. This is a rarity in indie games, as voice actors add to the budget of an incredibly small studio, and many choose to forgo this option and focus instead on written dialogue and music. On top of that, many voiced indie games don’t feel right, maybe the voice of the protagonist doesn’t match their body profile or their inflection and tone don’t meld well together with the scene at hand, there are a million ways to get it wrong and very few get it right. Either way, it’s a gamble to create voiced cutscenes, and Blackhole took the plunge and they did an amazing job at it. Blackhole’s voice actors convey the tone and gravity of each situation that their characters are in, and it really adds to the immersion you feel when you start off the game.

With such an amazing start, we were both more than ready to get a jump on the game, after all, with the amount of polish that we had seen just from the introduction, the gameplay must match the quality that was set. That’s where our opinions start to differ dramatically.

Puzzle platformers live and die by the quality of the two genres that they’re combining together, the tightness of the controls, the feeling and momentum of the character, the difficulty of the puzzles and difficulty curve must combine into a perfect storm in order to present a flawless experience. Blackhole’s biggest problem is it’s platforming. Brandon felt like the game’s physics engine was too slippery, the controls weren’t tight, you slipped and slid everywhere, the character was too floaty, and the physics going from water to air or vice versa felt akin to jumping into(or out of) a pool of molasses. Puzzle platformers live and die by their character’s movements, and the enjoyment that you get out of the games directly correlates to how well you can control your character and get him to do what you want it to do. Blackhole’s controls simply didn’t do it for him. He felt like there were too many meaningless deaths that were a result of the game’s physics engine, and not necessarily with his playstyle. Deaths are fine, and losing is a part of the game, but there are moments when you know exactly how to solve the puzzle, but can’t get the physics engine to play along nicely enough for you to be able to execute on those plans. There’s nothing more frustrating when you’ve figured out the solution to solving a puzzle, but the character isn’t cooperating with you.

On the other hand, I felt like the physics engine and movements were limitations that the FiolaSoft created and were cognizant of. The air control and ground-to-water movement left something to be desired, but I didn’t feel like it detracted from the gameplay, they were simply limitations that you had to work around and be aware of. When you jump in the air towards a platform, you’re committed to that jump. You’re not Mario, you’re not able to jump forward into the air, then decide that you want to go back and expect to be able to move backwards. Your character just launched himself forward, realistically, there isn’t a way for him to move himself backwards. While the physics and controls of the game are a tad bit slippery, I didn’t feel nearly as frustrated as Brandon did about the platforming. The puzzles we both agreed, were quite enjoyable. I felt like some of them were mind-bendingly difficult, even the earlier ones, while Brandon was able to figure out the perfect solution to each level pretty easily. The difficulty curve ramped up quite nicely, and we both enjoyed our time figuring out the puzzles. While there were moments that I had to ask for help, I always felt like the puzzles were always within reach. On the other hand, Brandon thought that the majority of the puzzles were pretty easy, but he still had an enjoyable time figuring them out. The puzzle difficulty and balance are strong, and is one of the most enjoyable aspects of the game.

Puzzles in the game consist of navigating your way through various worlds and environments, such as jumping in and out of water and hopping over molten lava, as you rush through each level to grab all the collectibles. The difficulty is increased further through the use of world shifting gravity portals, that twist your world on it’s side. Your ability to manipulate these gravity portals and knowing which ones to activate and when will determine your efficacy of grabbing all of the collectibles as quickly as you can. The difficulty of the game ramps up when you start mixing in platforming with these gravity portals, as you’ll quickly find ways to catapult yourself clear across the screen or accidentally drop yourself into lava. While the puzzles are challenging enough, Blackhole ups the ante by adding in timed system, in case you want to see if you can beat the qualifying time for a level. While I do love completing a game to 100%, I decided that I would stay away from trying to beat the timer.

The one part that we both disliked was the humor in the game. After you crash your ship, the AI that was integrated in the ship, finds its way into your PDA and communicates and walks you through the world as you try and find your lost crew members. She doesn’t so much communicate with you, as she heckles you throughout the entire game. While the humor may work for some, being called a coffee-boy wasn’t funny after the third time, and certainly wasn’t funny the fiftieth time that she said it. Auriel spends much of your journey heckling and making fun of you, and while a few of the jokes hit, a lot of the jokes were wide misses. Blackhole is a game that’s hard to recommend, as it sits differently with different people. While the puzzles are quite enjoyable, the finicky physics system, the slippery platforming and Auriel’s comments detract from the joy of the game. If you’re hankering for a solid puzzle platformer games, and are willing to look past the rough edges, Blackhole is well worth your time, but if you’re looking for perfection, you may want to watch some videos to see how it plays.