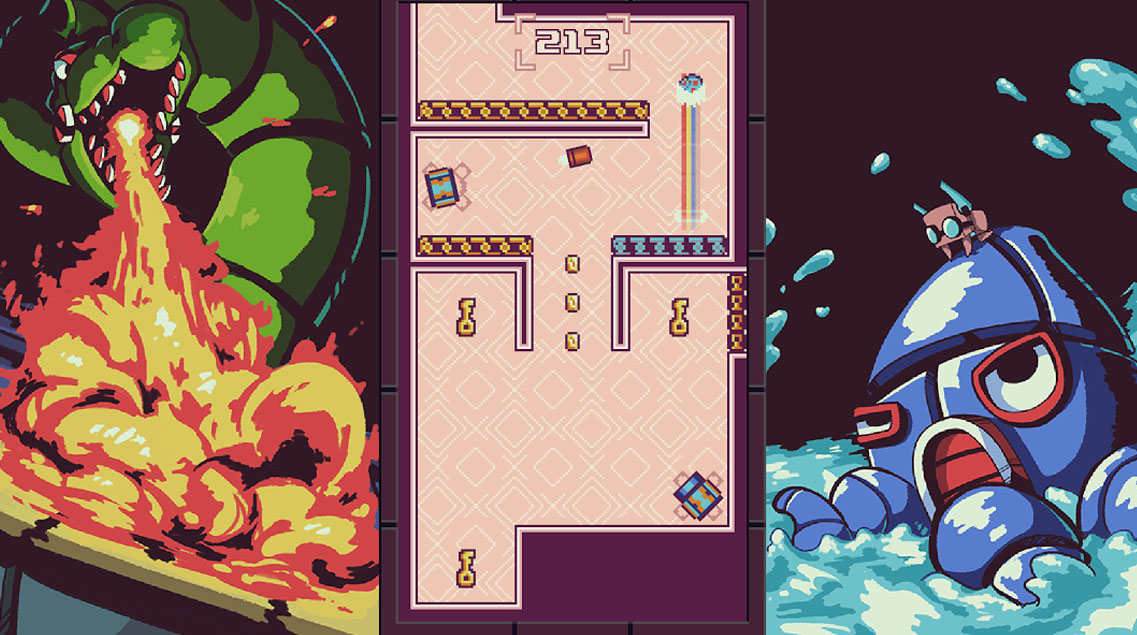 In Blitz Breaker you play as a gravity defying robot, whose main job is to make it to a swirly green portal at the end of the level. Along the way you’ll encounter a plethora of platforming challenges, environmental hazards and numerous traps(whose sole job is to make your life miserable). In order to navigate each deadly level of Blitz Breaker, you’re provided with two movement mechanics for you to make use of, air dashing and jumping. Movement in this game is unique, as your robot can’t actually walk around and air dashing is really your only way of getting around the level. You’ll dash toward a direction infinitely until you collide with an object, if you’re still alive after colliding with said object you are then free to dash off in any direction you please, gravity be damned. To survive in the game, you’ll need to plan and time your moves carefully to avoid running into any of the dangers that are placed throughout the map. Your ability to jump is only useful situationally and you won’t be using it much until the latter half of the game.

For the most part, each level in Blitz Breaker is fast, frantic and deadly. You’ll continually bounce about as you try and optimize each run, and discover the best way to finish off the level. To add to the challenge, you’ll also be playing on a quickly decreasing timer that doubles as your score. Once the timer hits zero, you’ll overheat, explode and perish in a fiery explosion. You can replenish and increase your timer by grabbing the various coins that are placed strategically around the level(usually in dangerous spike-filled rooms). On top of the added time pressure, you also have the ability to obtain a star if you complete the level quick enough/with a high enough score. The more stars you acquire, the more costumes that your little robot can wear.

Blitz Breaker is a game that I planned to play and and review when I wanted a break from the more intense games that I sometimes find myself playing or reviewing. After a couple rough hours in CS:GO or Insurgency, I sometimes feel like the need a simple arcade game to cleanse my palette and to take my mind off of things. I thought Blitz Breaker would be that game. The graphics are bright and happy and the gameplay looked simple and enjoyable. I’ve come to realize that Blitz Breaker is the complete opposite of what I meant for it to be, I’ve instead found an incredibly addicting game that had me rage quitting and saying, “I’m gonna get it this time, I swear!”. I’ve said this before, but you’ll spend an incredible amount of time optimizing your routes as you try and find better and faster ways to complete each level. Each level is bite-sized and while they’re always extremely challenging, you’ll always feel like they’re almost within your grasp. Levels that I felt were impossible to beat were few and far between, but they definitely did exist. On top of impeccable level design, you’ll also have boss fights that you need to deal with. I found each boss fight to be particularly satisfying, although the difficulty of each one definitely changes are sometimes don’t fit the general difficulty of the levels that precede it. Regardless, each boss fight is unique and makes use of mechanics that are introduced into each level.

The difficulty curve in Blitz Breaker starts off gently, allowing you to test the waters and get used to the gamplay, with it measurably ramping up in difficulty as you near the end of the game. While there are certain levels that gave me a lot of trouble, the level design managed to walk the fine line between a good challenge and unrelenting masochism.

While Blitz Breaker is fun, it’s definitely not without it’s flaws. In my opinion, what makes Blitz Breaker so much fun is the speed and franticness of the gameplay. The feeling of barely evading danger as you dash out of the way of an impending saw makes you feel as if you really are in complete control of the character. On the flip side, whenever you enter a level where movement is slowed down, you feel as if the fun and excitement has also gone away and leads to a greatly degraded gameplay experience. There are two instances where this is prevalent, the first one are water levels and the second one is the introduction and use of conveyor belt. In a game that emphasizes speed above all else, waiting for a conveyor belt to slowly move you in a certain direction or making your way underwater feels excruciatingly slow. While in water your air dashes are still as potent as ever, but collision and freefalling makes you feel as if you’re wading through molasses. In terms of level design, I can see the efficacy of these environmental challenges but the way that some of these were implemented in each level felt more like a trial of patience, rather than skill. In a game where you die quickly and often, slow movements reduce the amount of fun that’s being had.

Blitz Breaker is set to go on sale on itch.io and Steam for 3 dollars. I completed it 100 percent in 6 hours and I can say that it was some of the most enjoyable six hours that I’ve spent. The replay value is definitely there if you’re a speed runner or if you want to complete the game 100%, then this game will challenge you.