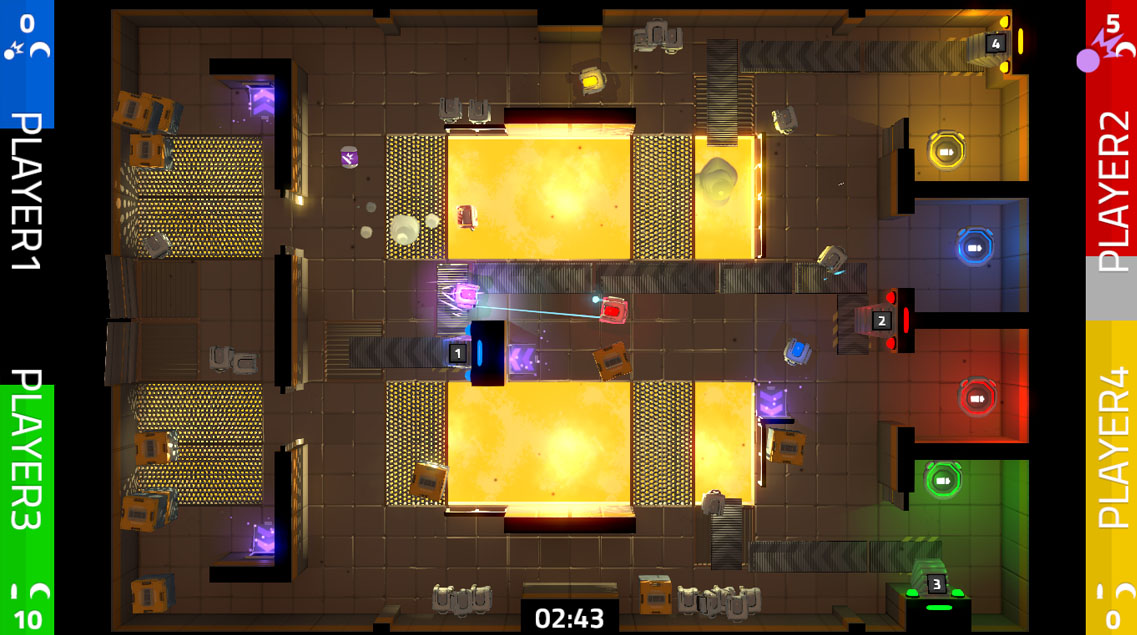 NOTE: I’ve only played the very first Early Access version of the game. The game has since updated and been released. I plan to update the review once I’m able to spend a good amount of time playing a local game with my co-writer.

Slybots is billed as a frenetic and fast multiplayer hotseat game, where you’ll have access to a variety of weapons, such as guns, swords, and grenades that you can use to take down your opponents and increase your score, as well as the ability to hide and disguise your robot as an unassuming grey box and lie in wait as an enemy rushes by you for you to take them out.

Slybots is meant to be played with friends, and this review will center around my experiences when playing with my co-writer. The first question we asked ourselves after spending some time with Frantic Zone was whether or not we enjoyed the game or night. Hotseat multiplayer games rely more on fun gameplay much more than their single player experience counterparts. Where there may be an engrossing story to patch up some of the drudgery that you may experience when playing a single-player game, dull moments shouldn’t exist in a hotseat game. The gameplay needs to be fast, frenetic and filled with tense moments and unexpected come from behind victories. Does Slybots fill all of these requirements? We were tempted to say yes, but after some extended game time, we decided to change it to yes, but with some caveats.

The basic gameplay in Slybots centers around your robot killing other robots. There are a variety of weapons for you to wield in order to accomplish your designated tasks, but the big twist comes when you put your robot your robot, and your robot looks exactly like the various boxes that dot the arena. You enter a state where you’re still able to move around slowly, but you are virtually indistinguishable from other boxes in your environment. This allows you to mount sneak attacks with your swords and net kills, as well as completely turn the match around with a single hit. Your ability to use this skill effectively will depend on how crafty you are, how you utilize your environment and whether or not your opponent notices you deactivating your bot. There are a number of conveyer belts in the stage that spit out random boxes, and by using a machine, you’ll be able to enter the tunnel and onto the conveyor belt in your deactivated state. This allows for a number of strategies that you can employ so that you can gain the upper hand.

In practice, how do these techniques stack up in actual gameplay? It’s extremely hit or miss. The gameplay in Frantic Zone is extremely fast paced, and while the stealth feature is nice, it’s much too slow of a tactic for you to reliably use. When the stealth feature does work, it works extremely well and has the ability to completely shift the flow of the game. Unfortunately, this doesn’t happen nearly enough, and the payoff isn’t usually worth it. Rushing your way forward in whichever game mode you’re playing, tends to be the most effective way to reach the top of the leaderboard. In contrast, the sword and gun are quite the potent combination. Your sword will destroy enemies with a single hit, and your gun is quite an effective way to force your enemies to continue moving. If you and an enemy swing your swords at the same time and the swords collide, you’ll both recoil backwards from the force of the hit. Effective maneuvering and strategy are key to using both of these effectively, and while repeated sword clashes may seem fruitless, with enough skill and foresight, you may be able to knock them back into an endless pit or a pool of lava.

An example of when stealth works out well in their Capture the Battery mode. Pay attention to the circular red goal the opposing team is moving towards

The flaws in Frantic Zone are many, but they’re small issues that can be rectified easily, and probably will once the game leaves Early Access. The maps aren’t balanced well, the spawn points for their capture the flag variant are fixed and allow for easy camping/complete dominance over the map, there’s no cost/benefit for swinging your sword endlessly(and this proved an effective method of walking around, as your sword deflects bullets as well) as well as the flaws in their stealth portion that I highlighted above. Even given all of these flaws, the game was still fun. Our group had a good amount of fun with it for a couple hours. The few upsets that were caused by a cleverly camouflaged robot were the highlights of our time with it. Sadly, we figured out the metagame quite quickly(especially in its incomplete state) and had put it aside after a couple hours of playtime. It’s hard for us to recommend this game whole heartedly, as the game’s appeal lasts for such a fleeting amount of time, and the stealth mechanic that the game introduces, while unique, felt extremely underpowered.