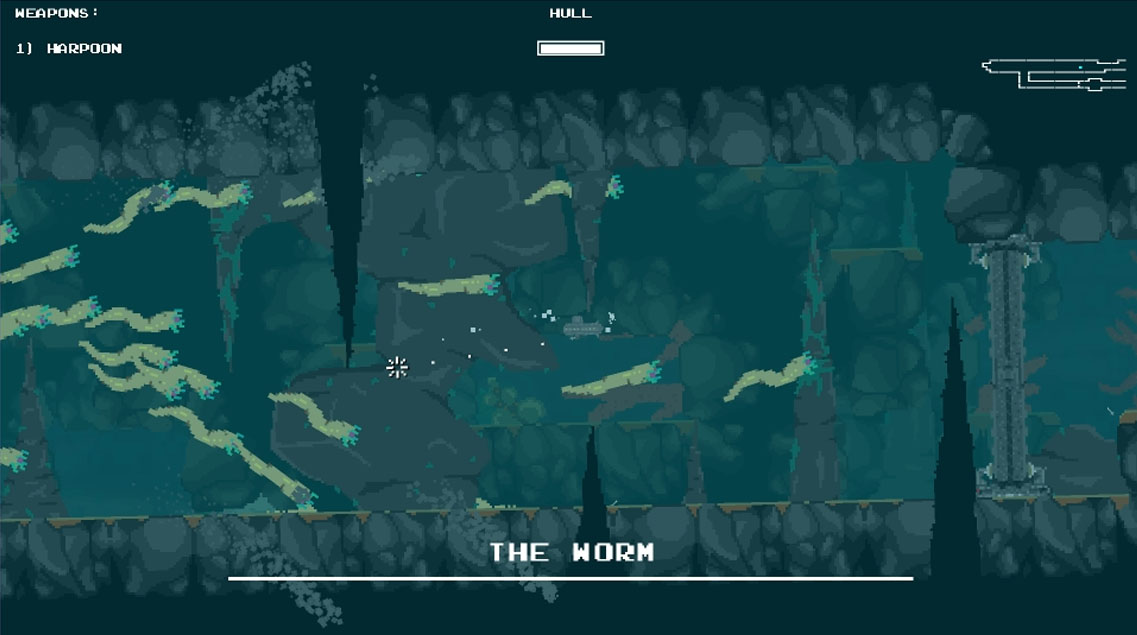 The Aquatic Adventures of the Last Human

Aquatic Adventures plays like the beautiful lovechild between Metroid and Shadow of the Colossus. The game starts with an opening cinematic, where you see yourself sucked into a wormhole, and then spit back out an unknown amount of years later. Upon reentry to the Earth, you’ll crash through snow and ice and find yourself in an underwater world, much different from the Earth as you knew before you had left. One of the most enjoyable aspects of Aquatic Adventures was how the story was conveyed to the player.There are no explicit journal entries that tell you exactly what happened and how the human race was wiped out. As you explore the environment, you’ll pick up on environmental cues and small bits and pieces of logs that are leftover from the world’s previous inhabitants.

It’s a very natural and organic experience and allows you to craft a compelling narrative through subtext. As you move further and further along in the story, you’ll come to the realization that you are in fact the sole survivor of the human race. The world that surrounds you isn’t owned or populated by humans, in the place of once beautiful sprawling cities, you’ll encounter the ruins of a major metropolis, ravaged by time and nature. You continually feel as if you’re a stranger in a foreign land, one that has trespassed upon a land that is not wholly yours anymore. The environments that you explore in the Aquatic Adventures are large and beautiful, as the developers have created an environment that fits the sprawling world and narrative that they’ve crafted. You’ll explore deep chasms, as schools of fish swim by you and an enormous whale lazily swims past you in the background.

The core of Aquatic Adventures is the setting and background of the story. You’re exploring an unknown land, whose history is unknown to you. Rarely do games manage to capture the same loneliness and despair of living in a post apocalyptic future, oftentimes the world feels too gritty or too dangerous. In it’s essence, Aquatic Adventures captures the a hauntingly empty landscape, devoid of human life. In a future where the world has ended, you’ll encounter more loneliness and despair, more than violence and drama. Along with the eerily peaceful environments that surround you, you’ll somehow find your way towards the lords of the ocean. Animals that have grown to enormous sizes and whose anger is unrestrained towards trespassers that enter their domain. You’ll engage in a wide variety of enemies who are out to destroy yet another trespasser. The boss fights that are dispersed throughout the game breathes life and excitement into the world. They represent the inherent danger of the deep, and how a peaceful excursion may quickly turn into a dance with death. Even at their most violent, each boss you encounter almost forces you into a moral dilemma. It becomes an internal struggle as you battle with creatures of the deep. After all, you’ve encroached on their space, and entered their domain, their only instinct is to protect themselves and their home. You’ll begin to question your motives as you slowly decimate each gargantuan beast in the game. You’re a trespasser, a drifter. These large magnificent creatures weren’t a threat to you until you invaded their personal space. It’s this aspect that is so reminiscent of Shadow of the Colossus. You’re effectively killing magnificently large creatures that have done no wrong to you. Given the similarities between the sleeping giants of Shadow of the Colossus and the monsters that lurk in the murky depths of the oceans in Aquatic Adventures, I was extremely surprised to find out that the developers had never actually played Shadow of the COlossus before. Regardless, the gravity and shame that I felt upon killing each monster left me feeling more than a little guilty.

Boss fights in Aquatic Adventures are characterized by two things, a gargantuan ocean beast and your quick and inevitable demise. Boss fights in Aquatic Adventure are extremely difficult and require an immense amount of concentration from you. You’ll need to move and react quickly to their actions, as well as pay careful attention to their attack patterns. Even then, this isn’t a game where you’ll be fine if you memorize a boss’ attack pattern, there’s a large difference between knowing what your enemy is going to do and actually executing your maneuvers in a way that will will allow you to fight another day. Every boss in Aquatic Adventures is different, and the attacks that they launch against you are varied and require an incredible amount of skill to react and dodge. Aquatic Adventures doesn’t bill itself as a difficult game, but the amount of deaths and frustrations that I suffered from each boss tells me otherwise. The sense of accomplishment that you gain from defeating a boss is rewarding, but is quickly overwhelmed by the regret that you feel for killing a beast that was minding it’s own business until you came along and disturbed it from it’s nap.

Exploration in Aquatic Adventures, for the most part is extremely peaceful. You’ll lazily meander through dark hallways, deep chasms, inky black depths and open reefs. Each environment is beautifully crafted, as you can tell that each screen was a labor of love from the dev team. While exploration is generally peaceful, that doesn’t mean that you won’t get killed by various environmental hazards that dot the underwater landscape. You’ll encounter voracious mussels, noxious waste and mines among many other things that are littered throughout the world. Even with all of these hazards, exploration in Aquatic Adventures never feels dangerous. You’re given time to properly explore and take in all of the sights that the world has to offer, and the world has a lot to offer you. In typical metroidvania style, you’ll encounter many environmental obstacles that will hamper your progress. Your only real option to proceed further in the game, are to destroy bosses and explore the various nooks and crannies that the world has to offer in hopes that you’ll find some parts for your submarine in order to further explore the world. You’ll swim back and forth across the levels, as you unlock more and more powerups that will enable you to find more routes for your submarine to explore. You’ll also find optional bosses that you can fight if you so choose in order to find and unlock additional upgrades to your powerups(not new power ups altogether). I had a great time exploring everything that the world had to offer, and the optional bosses are amazing themselves. You’ll know when you encountered an optional npss if they give you the option to back out of the room with your tail tucked between your legs. THe metroidvania aspect of Aquatic Adventures was wonderfully done, as there were only a few times in the game where I was honestly at a loss on what to do or where to go.

Given all of these things that Aquatic Adventures has going for it, I do have some criticisms of the game. The first being the insane amounts of difficulty that the game has for each of it’s boss fights. I’m no stranger to death and destruction of my character, but some of the deaths I’ve had in Aquatic Adventures feels almost unfair. WIth enough time and patience, you’ll eventually figure out a strategy that works for you or get lucky with the RNG and have the majority of the attacks not hit you by chance. This issue can be mitigated if not solved by the second problem that I had, some of the optional bosses that you encounter are impossible to beat unless you have a powerup. However, you’re still able to access the boss like normal. I spent about 30 minutes trying to defeat the Atomic Bubblegum(yes that’s the actual descriptor for the boss) before calling it quits and going back to exploring again. After 5 minutes of further exploration, I found a powerup that made my fight with the Bubblegum many times easier. If you’re going to play the game, try beating the Atomic Bubblegum without any additional thrusters. I came close and took it down to 1/6th of it’s health before I died. Lastly, I wish the map function was a little more useful. The ability to put down notes in rooms would be greatly appreciated, as I completely forgot the location of one of the optional bosses after I decided to step away from it for awhile and continue on with the main quest.

All in all, The Aquatic Adventures of the Last human was an extremely enjoyable experience. It combined the best of both worlds from Shadow of the COlossus and Metroid and crafted and conveyed a story with minimal text. I enjoyed my time with it, and would definitely recommend it for those looking for a relaxing metroidvania(until you reach a boss, in which case you may throw your keyboard out the window.).