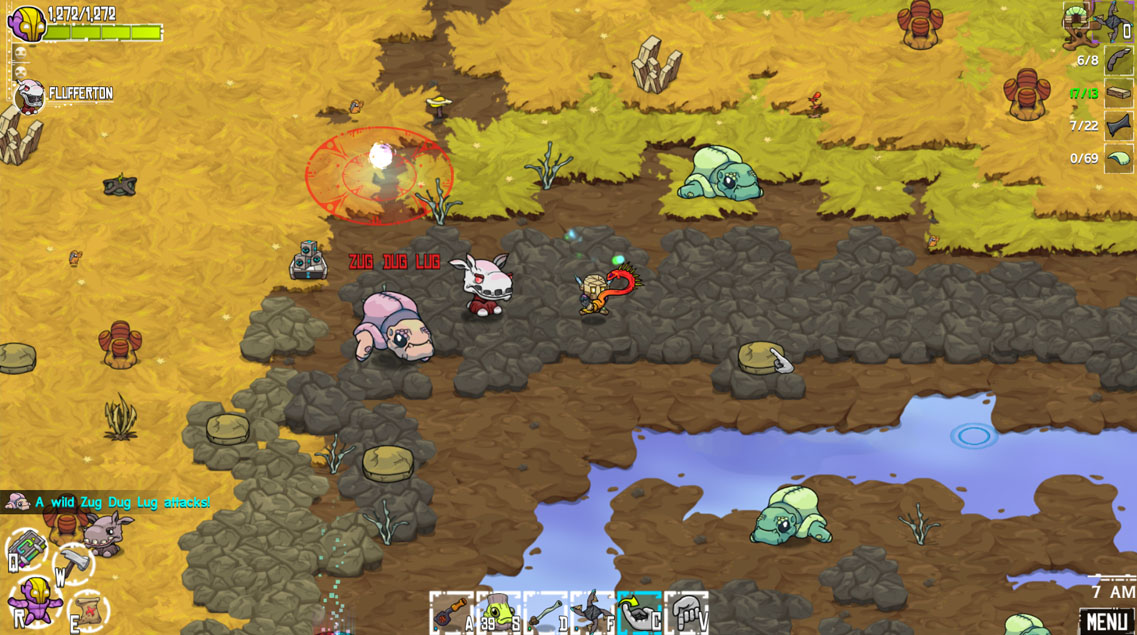 Crashlands starts off with a bang, with your spaceship exploding into a million pieces, leaving you stranded on an alien planet with only your trusty electronic sidekick, Juicebox, to keep you company. You’ll spend your first half hour in the game getting your bearings, running through the basic tutorials and in general just getting a feeling for how the game works. I’ll admit that my initial reaction with Crashlands could be summarized with the phrase “meh”. Afterall, the game felt eerily similar to Don’t Starve/Don’t Starve Together, and it didn’t seem to really differentiate itself from any of the survival RPGs that are available on Steam now. All of these feelings and doubts vanished when I first attempted to battle my first enemy. As a note, I played the game on the highest difficulty, so my experience may be a little different than others depending on what difficulty they played it at. The first enemy that I squared off against is a staple enemy in the game, a wompit. It sort of looks like a donkey head mounted on one extremely large and muscular legs and it enjoys stomping anything in its vicinity into a pancake. The anything in question usually turns out to be you. For all intents and purposes, this was an early fodder enemy, one that you’re supposed to kill quickly, harvest the ingredients it drops and move on with the game. I didn’t take it too seriously, I ran around lazily dodging its attack as I tried to smash it to death so I can get its sweet, sweet wompit leather. You can imagine my surprise, after a mistimed dodge, that my character died in a single hit.

Crashlands is a survival RPG that focuses much more on the combat and RPG aspects, than many other games in the same category. While there will be inevitable comparisons between Don’t Starve and Crashlands, I can confidently say that the gameplay difference between the two are night and day. Whereas Don’t Starve is closer to a slow burn, where you’re spending much of your time slowly avoiding death and trying to move forward at safe and steady rates, Crashlands runs into the room kicking and screaming, with a multitude of monsters that are trying to kill you, each with unique attack patterns, resistances and weaknesses.

Crashlands’ overall gameplay and mechanics are geared towards keeping the game accessible and easy to approach, rather than the dark gritty realism that current survival RPGs are focusing their attention on now. Gone are the multitude of chests that you have to manually craft and place, this is instead replaced by an infinite inventory, with which you can store anything and everything you find. Gone are the various patterns that you have to memorize when placing resources onto a crafting grid, and is instead replaced with a simple user interface that lists off all of the items you can build, and what resources are needed to build them. One can argue that many of these decisions that were made, may have been made to keep the game accessible on mobile platforms as well as desktop, but these simplifications allow the player to forgo the dirty details and focus more on the actual gameplay.

By forgoing the dirty details of crafting and harvesting, Crashlands instead turns its attention towards its loot and combat system. Combat in Crashlands is surprisingly deep, with unique attack patterns for each individual enemy that you fight against. You’ll battle against a varied amount of enemies, each with unique attack patterns that spell certain death for you if you let up your concentration even a little bit. Combat in Crashlands is fast, frantic and deadly. Each enemy that you encounter has a unique attack pattern that is native to its species. and each attack pattern has it’s own set of rules and nuances that you’ll have to observe and learn. While their attack patterns are simple, they are by no means ineffective and any lapse in concentration will bring about your impending doom. There’s no better feeling than to feel in complete control of your character, as you literally have a horde of enemies spitting acid on you, teleporting around the map and trying to stomp you. Effective combat is one of the most polished points of Crashlands and it easily supports the crafting portion of the game.

Crafting in Crashlands is a little different than most other survival games, where everything is available for you to craft right from the start. As I’m sure you all know, crafting a wooden helmet is Minecraft is exactly the same as crafting a diamond helmet. It’s the same shape, it just uses different materials. In Crashlands, you don’t have complete freedom over the items that you can craft, instead everything that you can make requires you to find a blueprint for that item first. While at first frustrating, this control allows the developer to create a sort of loose structure to the game. While it is frustrating that I can’t upgrade my current axe with stronger materials until I progress further into the storyline, it does make sense as to why the developers decided on this feature. It’s much too easy to run amok in the world, and continually crafting the strongest weapons available to you, and forego the meat of the game. Instead, you are paced(to a certain extent, you still ultimately have free reign over your character) at a certain speed, and unlock new weapons and workstations at a rate that is determined by your position in the story.

Blueprints in the world are plentiful, as you’ll automatically find blueprints once you’ve harvested enough of a certain material. So far, it seems that the drop rate is random, but I may be wrong about that. The random drops that you find from the blueprints, usually don’t deal with weapons, they instead deal with various furniture and lamps that you can build and place around your base. Stronger weapons and armors are unlocked as you progress further into the game, so don’t expect to be able to kill all the enemies right off the bat. If combat is what makes the game fun, crafting is what keeps the game running. Crafting is a core feature that implores you to go further and further out into the world, in order to find new enemies and materials to harvest. You’ll continually be pushed out of your comfort zone in order to craft the next big weapon that’s available to you.

On top of a really successful combat and crafting system, you’ll also have the option of growing and raising eggs that will eventually turn into monstrous pets that will aid you on your quest to deliver your packages. These pets provide invaluable assistance in in combat, as well as being an excellent source of materials that can only be farmed from them. I was pleasantly surprised to find out how useful these pets are, their usefulness in combat cannot be understated and the items that they produce are always helpful in crafting the next set of powerful armors or your next trinket or secondary weapon.

Teleporting around the world is pretty fun

The one thing that Crashlands does far better than any other survival games that I’ve played would be how they manage to incorporate old/under leveled items into each new generation of weapons/trinkets as the game progresses. In many survival games, items scale to your progress point in the game. You’ll only harvest certain items for a set period of time, before you grow too powerful and level up too high to need to collect certain items ever again. Crashlands excels in incorporating items that you’ve grown out of back into the game, giving you reason to collect and harvest any and all items that may cross your path(as if having an infinite inventory wasn’t reason enough.)

While I’m loving the way that Crashlands plays, there are a couple of pain points that do need to be addressed. One side effect of having an infinite inventory system, is that there isn’t an actual inventory that you can pull up if you want to take a look at what you have. While there are a multitude of reasons as to why this isn’t possible, it’s quite annoying to trek back and forth and search through your workstations to find the item you’re trying to craft and how many of each ingredient that you have. Butterscotch’s solution to this was a system to track recipes that you’re interested in making. On the upper right hand corner, there will be a list of items that are required by the recipe and how many of each you have, as well as how many are needed. While this is useful, you’re only allowed to track one recipe at a time. This leads to a lot of rough experiences where I’m trying to keep track of multiple ingredients at once and forgot an item for a recipe. Which means I have to teleport back to the base, click through all the workstations in order to try and find out where the item I want to craft is in order to figure out which items I need. This entire experience can be alleviated if you were allowed to keep track of multiple items at once, while this may clutter up the UI, it leads to a much better overall experience with item crafting. One request that I have, while it’s not a problem, is to give the players more incentive to build a base. WHile there are definitely self-motivated reasons to build an extremely large and elaborate base, I’d love for there to be incentives given when you construct a large base. Even minor things, such as increased health regeneration would give me enough incentive to really flesh out my base.

All things considered, Crashlands is definitely one of the most addicting survival RPGs that I’ve played in recent memory, if not the most addicting one that I’ve played ever. WIth its focus on loot and combat, Crashlands creates an addictingly cyclical gameplay experience, where you’ll cycle between destroying impossibly strong monsters and gathering up powerful materials to build your next set of weapon and armor with. On the surface, Crashlands seems very simplified, as this may be a result of creating a cross-device game, but ultimately, I believe that the design decisions made in Crashlands that accommodated a mobile platform(infinite inventory, simplified crafting, etc) made the game even stronger. By stripping away the extraneous dirty details and focusing instead on combat and gameplay, Butterscotch Shenanigans has created an extremely polished and enjoyable game that will keep you entertained for hours on end.