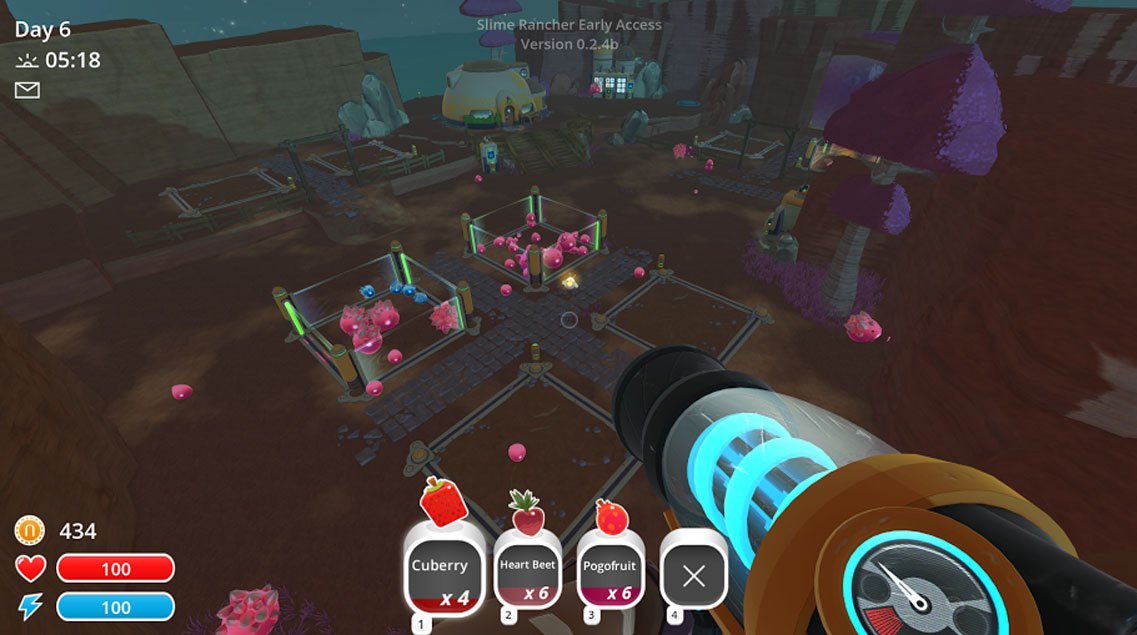 Slime Rancher is a disgustingly cute game, filled with adorable slimes that squish and bounce around the map. Your job as a rancher is to capture them, raise them them in captivity, combine them and collect little pellets that they put out and turn it into money.

Slime Rancher is just one of those games that you put on and play when you’ve had a hard day at work and just want to relax and unwind. With its cutesy graphics and simple gameplay, you’ll quickly find yourself wrapped up in all that the game has to offer, as you run around the world capturing more slimes so that you can raise them. In this sense, Slime Rancher harkens back to Harvest Moon and Animal crossing, where it has you performing rote and otherwise repetitive tasks, but wraps it up in an amazingly cute guise that complements the calming and relaxing gameplay that it encourages.

The gameplay for Slime Rancher centers around capturing slimes, throwing them into forcefield padlocks, force-feeding them as much food as you can get your hands and reaping the benefits. If this game featured anything else that wasn’t a ridiculously cute slime, there would definitely be cries of animal cruelty. Certainly the most enjoyable aspect of Slime Rancher is the act of running around and harvesting the slimes that litter the world. You’ll explore valleys and cross mountain passes in order to find small colonies of slimes that have managed to eke out an existence on nothing but a tiny grove of carrots. You’re armed with a vacuum pack(a la Luigi’s Mansion) that can suck up a limited amount of items. You’ll quickly suck up slimes, vegetables, fruits and money as you roam around the world in an effort to build your farm.

Sucking up items is easy, and if you happen to suck up an oversized slime that doesn’t fit through the nozzle of your vacuum, it’ll get stuck to your gun as long as you keep the button held down. You’re also given the option of shooting out any slime that’s stuck to your gun, which leads to a lot of “harmless” fun, such as launching them into the nearest body of water and watching them splash.

Not all of the slimes that you run into are passive, so you’ll have to get acquainted to their movements and attack patterns, and while they do add a bit of challenge to the game, I never found death and dismemberment by slime a particularly stressful event. Each species of slime in the game also eats particular kinds of food, so you’ll also need to collect and stockpile certain fruits, vegetables and meat in order to keep your ranch running happily and smoothly. You’ll need to keep them fed, when they hungry and cranky, they’ll jump out of their enclosure and wreak havoc on your ranch.

There’s something incredibly relaxing about the way that Slime Rancher plays, and while it’s a lot more action packed than Harvest Moon or Animal Crossing, the slice of life experience that it offers feel extremely similar to the titles I mentioned above. You’ll spend your day to day, either collecting slimes, food, feeding them or exploring the world around you.

It’s hard to give a complete review of Slime Rancher, as the game is still in Early Access, but the core concepts of the game are there and it’s quite lovely. As you turn your slime’s poop into money, you’ll be able to afford more enclosures and more items, allowing you to navigate around the world with ease and grace. You’ll spend your time collecting and creating new slimes as you combine them, feed various items that you find in the world, and find master slimes in the lands around you. It’s hard to give an exact description of the game and what makes the game so enjoyable, just as it’s difficult to explain why Animal Crossing and Harvest moon is so much fun. You’re doing everyday, mundane tasks, but they’re presented in a way that breathes life and atmosphere into them, and Slime Rancher does the same with this task of collecting slimes and feeding them. There’s a certain charm to the game that’s quite hard to place. There are no stressors in the game, while there are aggressive slimes that can damage your health and ultimately kill you, death isn’t a worry in the game. You lose all the items in your vacuum gun, but that’s not that big of a deal.

I recently attended an interview with Jonathan Blow(of Braid and The Witness fame) and he spoke about how AAA game studios are outputting these large amounts of cookie cutter games that are amassed by incredibly large disparate teams, and how that affects the final product. Not only is there no innovation, there isn’t a unified vision for the entire game. A developer on those teams are basically cogs in a machine, while you may try and innovate, there will always be something that’s stopping you, some upper level management that will stop your idea. Slime Rancher is the antithesis of this. If there’s a word to describe the overall feeling of SLime Rancher, it would be unified. The gameplay, art and sound meld together to form a cohesive whole, and lends to an experience that is more than the sum of its parts. It manages to capture the quaintness of living on a ranch, herding and capturing animals, feeding them and watching them grow. While I feel like I may have understated the importance of collection and exploration in the interview, they are ultimately the most important aspects of the game.

Capturing and raising slimes is fun, and overall is a very relaxing experience. While there are some things that I definitely want to see added to the game, for the most part, the core of the game is solidly built and I can’t wait to see what Monomi Park has to offer for the game. The game is currently out on Steam and in Early Access and available for 19.99.