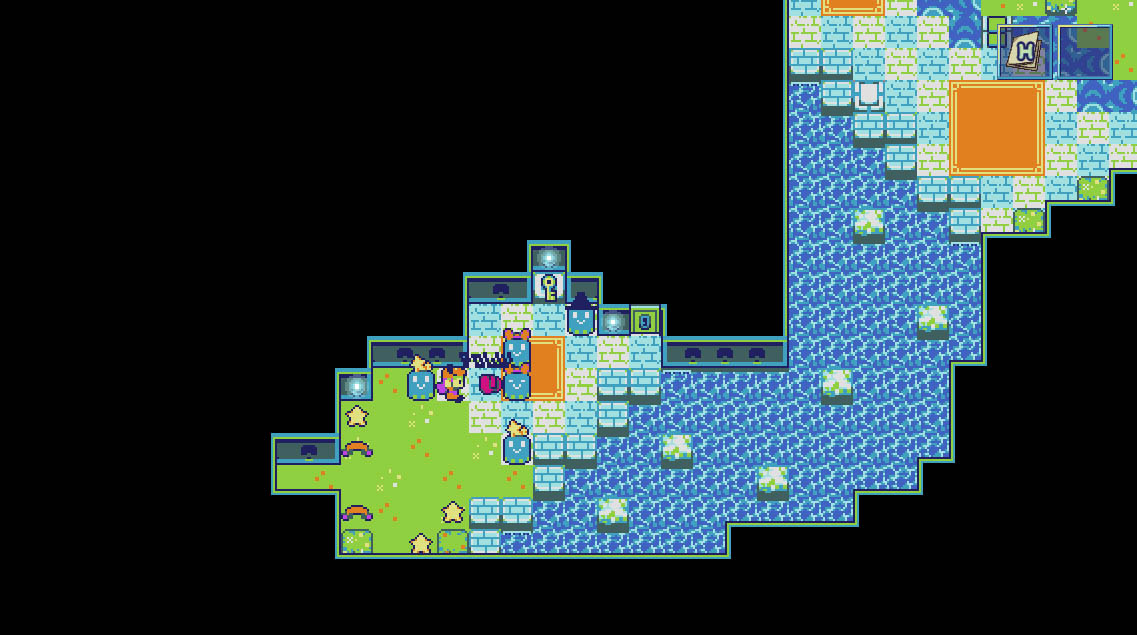 Ultra Hat Dimension has an extremely simple premise, you need to grab the key that unlocks the door to the exit. This simple task is complicated by the existence of hat wearing blocks that decorate the level and serve to impede your progress. Unlock standard puzzle games that have obstacles that block your way, the blocks in Ultra Hat Dimension are sentient, don’t like strangers coming near them and are prone to punch anything that comes in contact with them.

Gameplay in Ultra Hat Dimension is based on a simple premise that continually evolves as you progress further and further into the game(as any good puzzle game should). The interesting part about Ultra Hat Dimension, is that each new integration into their system feels like a complete refresh of the game, opening up a plethora of new opportunities, puzzles and difficulties. When you begin the game, you’ll quickly find out that standing next to a block will get you punched and you’ll automatically get pushed back one square. It’s a simple enough concept that can lead to difficult puzzles and an enjoyable experience.

Once you feel like you’re getting the hang of getting pushed around by these blocks, you’re then dropped into a level where you’ll meet a variety of blocks wearing different hats, and the behaviors and punching behaviors of each block depends on the hat that they wear. All blocks will punch you indiscriminately if you walk next to them, but some won’t punch you if you were punched into that position by another block. So not only do you have to deal with violent, punch-prone blocks that will constantly smack you around, you’ll need to deal with their individual personalities. Once you start getting comfortable with that, the game then throws hats at you, where blocks that are wearing the same hat as you won’t punch you, then you’re told that you can push a block a set distance at the cost of your hat. After that you’re introduced into a level where you can push a block into another block and have them duke it out, with special rulesets being created based on what hat each block is wearing. The list goes on and on and the complexity continues to grow as the game wears on. Regardless, with each introduction to a new mechanic, the game feels like an entirely different game, with each concept completely changing the way that you analyze and approach each level.

There’s something to be said about good level design in puzzle games, where you need to have a gentle enough difficulty curve so that your players can get their feet wet and used to new concepts, but steep enough where they feel like they’re continually being challenged and pushed by the game. Making your game too difficult, too quickly will lead to a sharp decline in player engagement and satisfaction, but make it too easy and the game quickly loses its appeal. When you first start the game, the difficulty curve in Ultra Hat Dimension is extremely gentle, giving you a lot of time to get adjusted to how the game works and some of the new mechanics that it introduces. While the curve is nice and gentle, there was definitely a period of time where I slowly started losing interest in the game. Many of the solutions were quite obvious, with various stone walls that were placed strategically in a level which gave away how the level could be solved. Thankfully, this monotony is broken up with the introduction of new mechanics, as well as a marked increase in difficult around midway point for the second floor.

When it comes to the other facets of the game besides game design(art, music, sound effects), Ultra Hat Dimension captures and combines an cohesive experience where the only valid descriptor to describe the experience is charming. The game music is wonderfully whimsical, and serves to support the cute pixel art that makes up the art of the game. While the pixel art isn’t ground-breaking in terms of details or animations, it has a unique art style that makes a wonderful use of a limited color palette. The sound effects are probably my favorite part of the game, with seemingly all of the sound effects being generated from someone’s voice.

As a puzzle experience, the game is quite a bit of fun, but it’s not without some improvements. The beginning of the game is quite slow, and while this is to be expected of the early stages of a puzzle game, many of the beginning levels had solutions that were given away by the environment. One thing that I did want to see, was a built-in visualization that you could toggle on and off for the travel path and destination when you decide to push a block. I spent quite a bit of time, moving my character around, replicating and counting out the five block travel space a block would move. This can be completely avoided with a better defined border edge for some of the blocks. While there are alternating color tiles for the stone floor, it gets a bit more muddle up and confusing on other surfaces, such as grass. While this didn’t detract from my experience overall, it was definitely a friction point for me.

Overall, Ultra Hat Dimension was an enjoyable exercise for my brain, that’s wrapped up in a charming and polished package. If you stick through the gentler beginning levels, you’ll reach a brain-twisting, brain-melting heaven that will have you scratching your head and hitting the reset button over and over again.