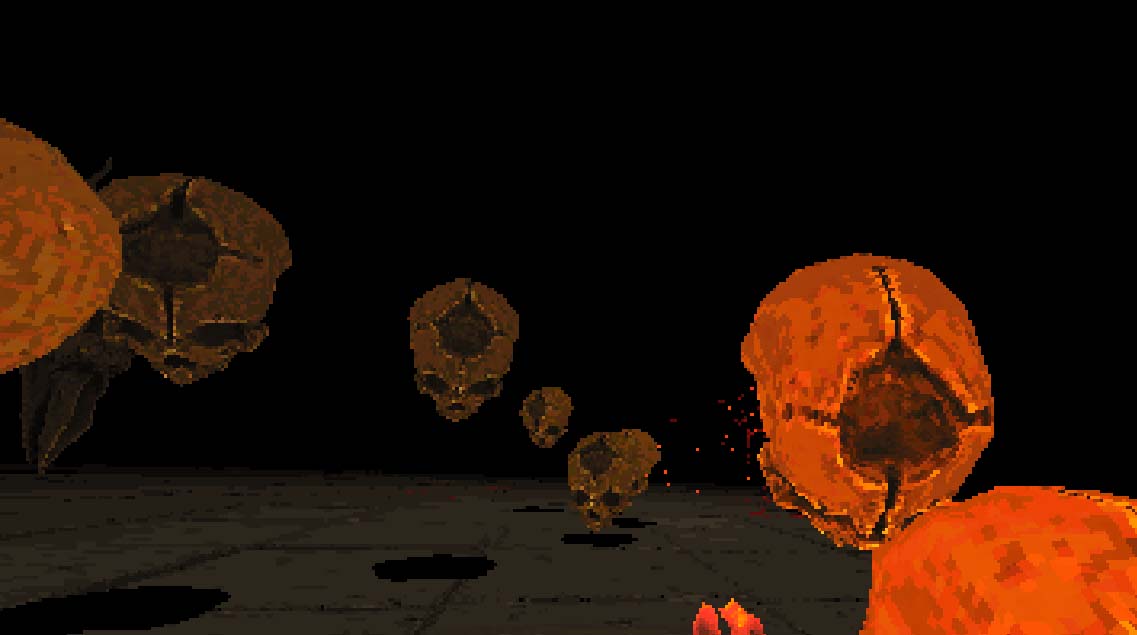 Upon your first run of Devil Daggers you’ll probably last less than 45 seconds. On your subsequent playthrough you’ll be lucky to reach 50 seconds. In fact, you’ll probably spend the majority of your first hour getting swarmed and decapitated over and over before you finally survive a minute in this brutally difficult, arcade shooter.

Devil Daggers is a lo-fi shoot ‘em up that focuses on insanely fast movements, deadly swarms of enemies and a deadly shower of daggers that you can summon with your fingertips. You’ll have the option of shooting a steady stream of daggers towards the enemy or let them fly in a shotgun-like blast. This is combined with a movement system straight out of an old school id game, where circle-strafing, bunny-hopping, rocket jumping and jump strafing are going to be the key to surviving any longer than 45 seconds. You’ll spend your time trying to outmaneuver enemies and running them in circles as you try to get position yourself in a slightly better position in order to survive half a second longer. The enemies in Devil Daggers aren’t so much difficult to deal with, as they are numerous. You’ll have to deal with an insurmountable amount of horrendous hellspawn as they spew out from the ether and attempt to kill you.

The trick to staying alive in Devil Daggers, isn’t reliant on just well-placed shots, it’s a combination of timing, maneuvering and knowing when not to shoot. The enemies that you’ll encounter on your various playthroughs will have a higher top speed than you, which means that trying to outdash or out maneuver them in a straight line will only bring your run to an early end. You’ll need to switch it up, with circle-strafing, quick directions changes and rocket jumps. One of my favorite strategies involve doing a 180 and carving a path straight through the middle of the swarm. In addition to trying to outflank enemies, you’ll also find yourself picking up red gems, as you destory the towers that spew out enemies or the floating horned skulls. These red gems are important to your gameplay, as upon collecting 10 of them, you’ll upgrade your weapon and shoot out daggers at an even greater rate and volume. While this may sounds like an easy task to do, it’s quite difficult. When you destory an enemy that drops a red gem, the red gem will move away from you if you keep shooting and move towards you when you stop. Keeping a fine balance between shooting and refrain creates a balancing act that’s hard to keep up.

All of this is wrapped up in a leaderboard, and it’s probably the most well implemented leaderboard that I’ve ever seen. It’s quite a simple leaderboard, it ranks you based on how long you’ve been playiing the game, but the innovative part is that you can rewatch the highest scoring runs in the game. This is built on top of an anti-cheat system that’s doing an amazing job at keeping only legit players on the leaderboard. When combined with the demo system, you’ll spend your time watching and analyzing the top player, in an effort to find out their strategies and what you can do to lengthen your survival time. I’ve never felt a need to climb a leaderboard as much as I have when playing this game, but being able to watch replays on the fly of the top players really does help you with optimizing your own run.

Devil Daggers is a game that is reliant simply on skill, and how well you know the game and the system. The entire game is a learning and growing process, you’re dumped into an arena with an endless spawn of enemies, whose patterns are quite easy to read. The only difference is the sheer volume of enemies makes you rethink your entire strategy and how you want to approach them as more and more make their way into the arena. This isn’t a rogue-like, where enemies are procedurally generated, created and spawned in, Devil Daggers follows a script. You’ll face enemies in a certain order, and you’ll need to learn how to deal with each of them in combination with each other. The biggest stumbling block for me was around the 45 second mark when an extremely large enemy spawns in, along with a seemingly endless swarm of skulls that are tailing me. After spending time with Devil Daggers, you’ll learn the habits and patterns of various enemies and you’ll devise strategies to dealing with them. The game doesn’t feel unfair, you’re trapped in an arena where only your skill dictates how long you live. Every death that I sustained was a result of a mistake I made or a gross oversight on my part. Every second that you live in Devil Daggers is filled with a myriad of possible avenues to success, and even more avenues for failure.

Devil Daggers is a devilishly difficult dance with death, and you’ll spend the majority of your time cursing the enemies that repeatedly beat you down. It’s a difficult, arcade shooter but it’s one of the most addicting games that I’ve ever had the chance to play. You’ll be hitting the restart button and telling yourself, “Just one more time.” over and over and you slowly and painfully crawl your way up the leaderboard. The highest score on the leaderboard as of this review is held by Draqu at an astounding 580 seconds. For comparison, after two hours of playing, I’ve managed to hold an amazingly long run of 70 seconds. Devil Daggers is available on Steam for 5 dollars and you’ll get an amazing amount of bang for your buck.