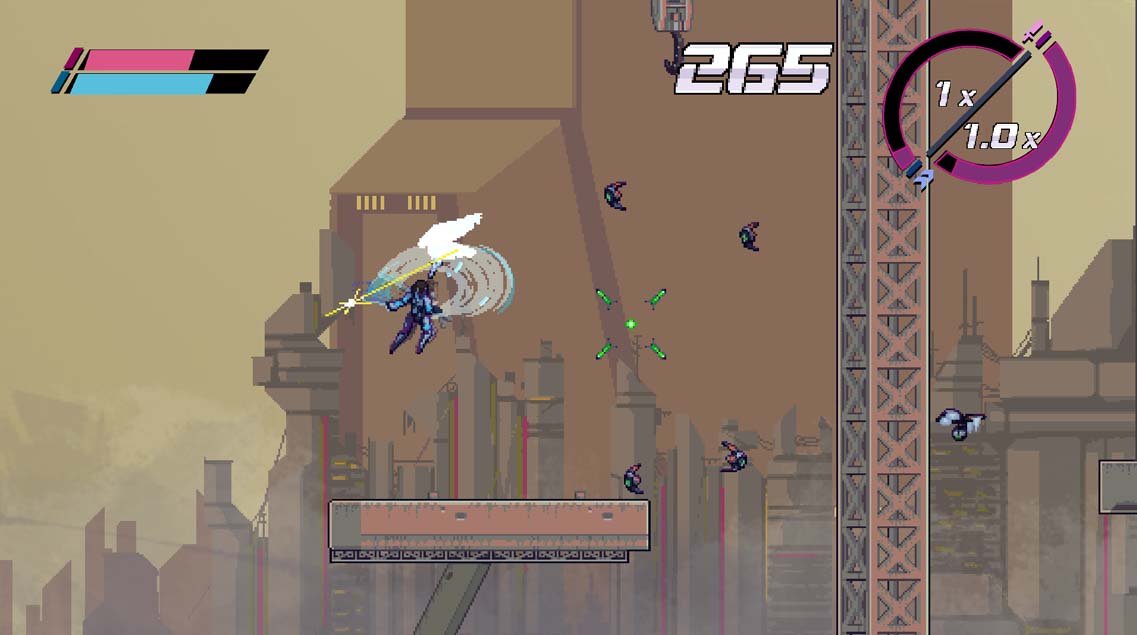 BA:R is an incredibly intense arcade shooter that emphasizes speed, ultra-maneuverability and high octane destruction. You’ll be equipped with a couple of weapons that will aid you on your journey to wreak robot death upon each of the arenas that you’ll be fighting in. You’ll come outfitted with a gun and a sword that allows you to efficiently dispatch any enemies that come flying your way, as well as the BLAST system that’s a part of your armor. The BLAST system will allow you to dash along the ground and up walls at incredible speeds, allowing you to fly from one edge of the map to the other. When combined with your gun and your sword, you become a surgical knife that accurately dances over the battlefield as you leave a path of destruction in your wake.

BA:R has alot of things going for it, the soundtrack is sublime and fits the mood of the game well, the graphics are your standard indie affair, but have their own style and flair and the sound effects add a lot of the punch to the game that makes you feel as if you’re doing actual damage to your enemies. These all come together when watching the trailer, as you watch the developer carve, slice, shoot and wallrun around the world as he’s destroying enemies. In practice however, the gameplay is a leaves something to be desired.

I hate to speak ill of an obvious labor of love, as you can tell that the developer put alot of heart and soul into this project, but the end experience leaves much to be wanted. BA:R is supposed to be a high-octane shooter, that will have you running and gunning through the levels, but it doesn’t particularly work out to be that way. Much of the time, you’ll be slipping and sliding around the levels, trying to get a hold of your character. The boosting and wallrun system allow you to feel like you’re flying all over the level, but only when you travel in a straight line. If you intend to get anything more complicated than that, you’ll have an extremely hard time getting your character to go exactly where you want to go. The control system for me, didn’t work at all. I played with both a gamepad and a keyboard and mouse, and while the gamepad may have been a tad bit better, controlling my character felt more like an excercise in frustration than in control. The controls for this type of game is absolutely key, as you want to feel as if you’re in absolute control of your character, for much of the game I felt like I was guessing on where my character was going to go, rather than feeling as if I had ultimate control over my character. This is combined with your charge system for your BLAST system, continually running out and leaving you high and dry as you’re pelted by enemies. While the concept does make sense for you to run out of juice, you run out of juice far too quickly and it often leaves you stranded in bad situations. While the argument can be made that being able to plan out your strategy far enough so that you’re not in a bad situation, I found myself stranded enough times where I felt like it was hindering my enjoyment of the game. I want to be able to carve a wanton path of destruction and computer chips in my wake, not run out of energy halfway through my run and get pelted by robots.

The length and content of the game borders on the short side, with only three arena levels and a handful of unlockables for you to nab. I don’t expect the world from an indie developer, in fact I usually love how short and sweet indie games are, usually finishing up right before the game starts to feel tired, but the amount of variety and replayability for BA:R borders on the short side. I recently reviewed Devil Daggers, an arena shooter that I absolutely loved and had a hard time putting down. There’s only one level in Devil Daggers, but a clever use of varied enemies, attack patterns and an online leaderboard had you coming back for more. When looking at BA:R, you’ll face the same enemies over and over again as you bounce through different levels, and while you have a choice of weapons, the stock ones were my weapons of choice for much of the game. WIth the lack of an online leaderboard, you’ll be mostly competing with yourself once you finish up all of the unlocks.

BA:R comes wrapped up in a sweet package, with great graphics and audio, but the contents leaves you with a weird taste in your mouth. The game feels like an incomplete game, more of a tech demo, rather than a fully fleshed game. The core mechanics in the game feel like they’d be a much better fit for a metroidvania, rather than an arena shooter. The dashing mechanics feel much better suited towards a more open level that rewards exploration and clever maneuvering rather than bouncing around the same levels over and over again. I love the general concept of the game, but the execution and price leave little to be desired. I’d pick up the game if the concept sounds interesting to you, but I would push you to wait for it to be on sale. While the game definitely has its moments, where you destroy a swathe of enemies with your sword, the controls are all over the place, the energy system puts a stop to your fun just when it starts and the lack of content make the game hard to recommend for $12.