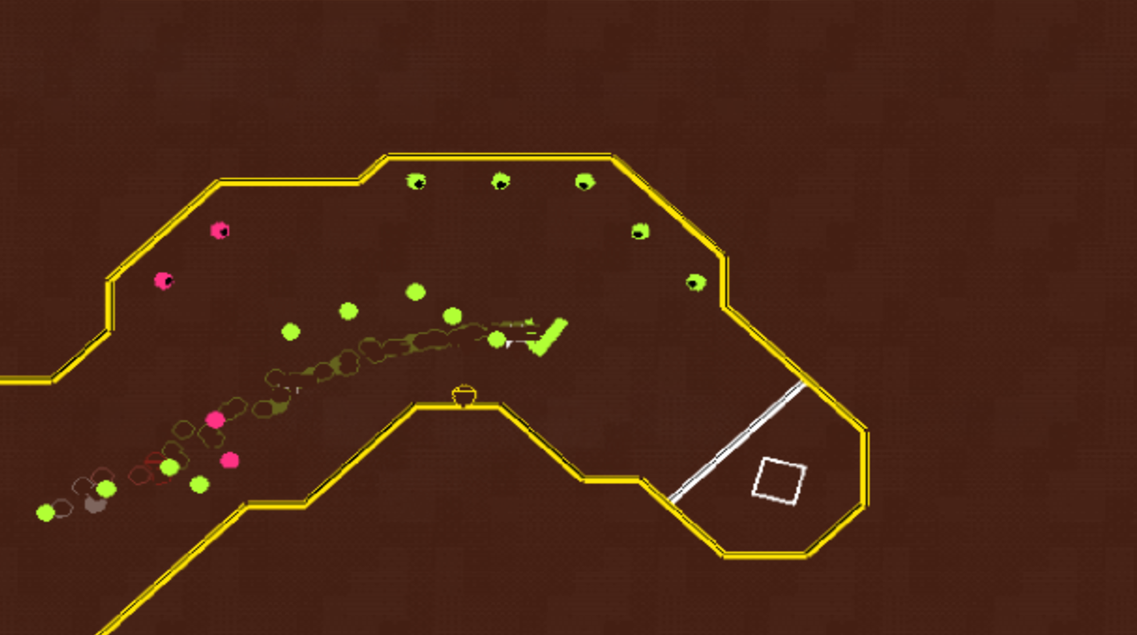 I first played Flywrench years ago, back in highschool when it was just another prototype that Messhof had just released. It was a time when I had an incredible about of free time, a near infinite amount of free time and played every single indie game that I could get my hands on. I still remember when I first downloaded Flywrench, it was a small, unassuming game from the developer of The Punishment and Punishment: The Punishing, so I had an inkling of what I was getting myself into. A couple of hours and lots of angriness and disappoint later, I had decided that the game was too hard and deleted it off of my hard drive. Fast forward to years later to the present day, I was delighted to find out that Flywrench got an updated release on Steam. I was convinced that my previous difficulty with the game was due to my lack of experience and skills in games.

The premise for Flywrench is simple, you play as a white bar, and you need to navigate around various levels in order to traverse through the solar systems. Much like water, your Flywrench has three states of matter, which means there are 3 different ways to fly and maneuver around a usually cramped little space. Each state of movement has a color associated with it, you can flap your Flywrench to ascend, when your Flywrench does this, it changes to the color red. You flap once every single time you press the button, and you can hold down the button to hold your color state. When you’re not doing anything and enter freefall, you turn back into a flat white bar, this state gives you a little more control over your Flywrench as it descends and glides through space. The last is the spin state, in which your Flywrench will rapidly spin and turn green. This state is especially useful, as it is my “I did something wrong and don’t know what to do” state. It is thusly named, because you’re always dropping towards the ground in Flywrench, when you make contact with a wall, your wonderfully barebones ship explodes into a million little pieces and you quickly start over from the beginning. The spin state allows you to bump into walls freely, without worry about running into a wall and dying, but in exchange you have no control over your characters bounce direction while it’s spinning.

The color of these states are important, as when you navigate through the levels, you’ll run into colored lines that will block your way. The only way to bypass these lines, is to cross them in the correct color state. For example, if you’re having a wonderful time bouncing around the screen in your green spin state, and you run into a red barrier, your Flywrench will explode and you’ll have to start all over. While at times you feel like you have the utmost control over your little ship, there are times when you are literally flying by the seat of your pants and reacting to various dangers as they flash by the screen. It starts to feel less like you control your character, as much as your directing chaos towards a certain direction. Make no mistake, every single mistake you make is your own, as this game requires an incredible amount of skill and dexterity to know when and how to switch colors, and what angle to fly through.

Flywrench will break you, at what point it will may differ from person to person, but you will quit out of it on more than one occasion. This is due to Messhof’s level system, you’ll start off and probably have a grand old time playing through the levels. Some of them are marginally more difficult than others, and you will end up dying, but there weren’t any levels in the first couple of planets that will make you think that this game is actually hard. It’s not until you start hitting the spinning windmills of death, or the quick switches of different colors or the gravity wells, or the button switches, or the turrets. You’ll encounter a plethora of environmental hazards who’s sole jobs are there to make your life incredibly difficult and taking a sadistic joy in making you cry onto your keyboard. For me, I started feeling a sinking sensation once I hit Jupiter. Once I finished up Earth I was about ready to cry. Mercury had me rage quit after the fourth level. Flywrench comes packed with an incredibly varied and nuanced level design, ones that joy in bringing your hopes up then crushing them, or just crushing them before they even have a chance to blossom. It’s this maso-core difficulty that makes me love Flywrench so much. There’s nothing like dying a hundred times in one level, before you make that one perfectly flawless run to finish up the level.

If I had any complaints about Flywrench, it’s that the first couple of worlds didn’t have any outstandingly difficult levels. While I get that the first couple of worlds are there to ease you into the game, I feel like Messhof pulled punches in the first couple of worlds. While he more than made up for it in the last couple worlds, I would have enjoyed to see more signature Flywrench difficulty more often. Many of the Flywrench levels are short affairs, in relatively contained little worlds. While this lends to the arcade-style game that Flywrench has, some of the larger more sprawling levels that Messhof introduces are incredibly fun, challenging and rewarding. Gone are the mad dashes , and instead a carefully calculated plan is hatched, followed by a short duration of madness.

Flywrench has alot going for it and Messhof has continually been adding in new features since the game has been released. Outside of the main campaign, there are time trials for you to complete, an editor and has been integrated with Steam Workshop, offering you even more replayability and extending the life of the game even further.