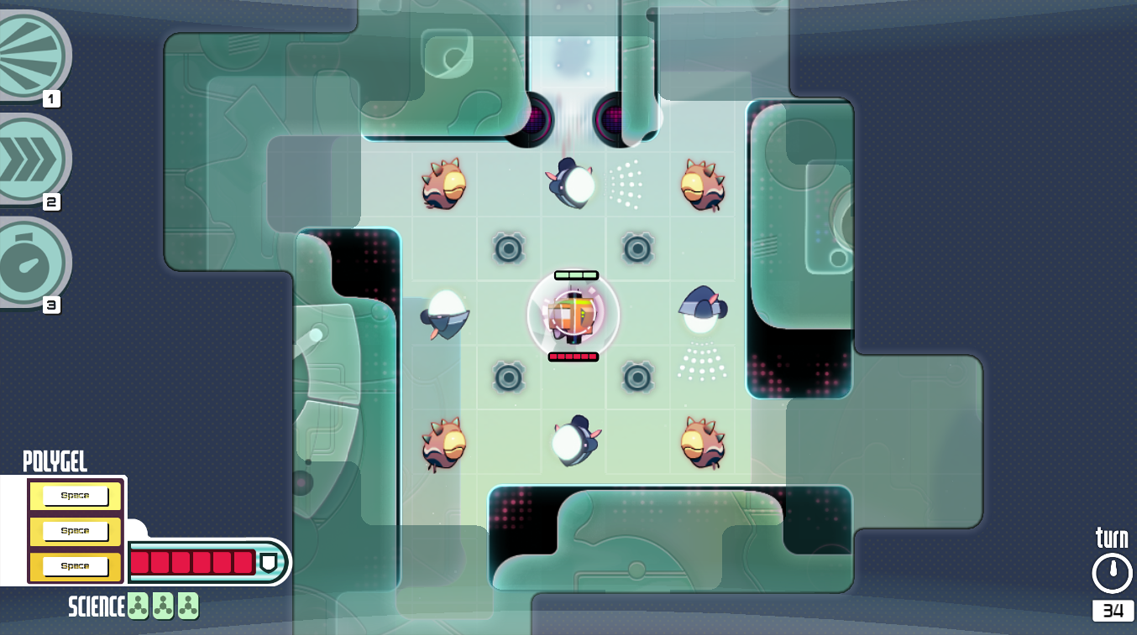 Nova-111 combines alot of genres into one game, and can be classified as a roguelite, where certain concepts that are popular in the roguelike genre are taken and transplanted into an entirely different setting. One of the more popular instances of this is Rogue Legacy, where your character’s traits and the levels are procedeurally generated, but unlike traditional roguelikes, the game play is represents that of an 2D-platforming hack and slash game. Many of the games that are considered rogue-lites borrow on this formula, where the levels, loot and characters are procedurally generated, but the actual gameplay moves away from the turn-based affair that is usually associated with roguelikes. Nova-111 flips this upside-down, the enemies, loot and levels are created by hand, but the navigation, movement and battle system still retain that of a traditional roguelike.

Roguelikes are a bleak affair, where you are fighting against a seemingly endless horde of enemies that are out to kill you and stop your from retrieving your Amulet of Yendor. As such, the battles are short, intense affairs, in which your time is spent trying to decide whether or not to attack an enemy, go the long way around and avoid it or spend the next 30 minutes searching for a secret passageway because it’s blocking your only way to progress forward. Every fight in roguelikes require a sense of purposefulness and strategy, running in with your sword swinging may work for the lower level enemies, but once you get a few floors down you’re sure to be pulverized by an unassuming water nymph. Nova-111’s combat system reflects this sense of purposefulness and strategy, but beefed up, polished and just as deadly. Each enemy you run into has an attack pattern that they follow, and by correctly predicting their attack patterns you can dodge every single attack that’s throw your way. The difficulty in this starts amping up when there are multiple enemy types on the screen, that are all trying to cut down your cute little space ship and turn it into scrap metal. Combined with turn based enemy attacks, are real-time enemy attacks and real-time environmental dangers. Real-time enemy attacks force you to make your decisions quicker and react to sudden changes at the drop of a hat, and the same goes for environmental hazards. One of the more useful environmental hazards to keep track of are the stalactites that regularly line the ceiling, they’ll drop if you hit them or go under them after a certain amount of time. There’s nothing more satisifying than baiting an enemy to wait under the stalactite and watching it fall and crush your adversary. To add another layer of complexity to this battle system, is that there is friendly fire in the game, enemies will inadvertently attack their comrades if they move into the line of fire.

Battles are an extremely tactical affair and your ability to survive is predicated on being able to predict your enemies movements and remaining cognizant of the evnironmental dangers that you can take advantage of. Enemy encounters grow in complexity as you progress further into the game, and fights turn into deadly dances of death as you dodge and weave your way into a more favourable position.

Beyond the fights and the battles, each level in Nova-111 is filled with traps, puzzles and secret areas. Navigating and discovering the complexities of each world is a joy in and of itself, as there are a variety of enemies and obstacles that restrict your movement. Being able to navigate and think your way through the world is one of the more rewarding aspects of Nova-111. You’ll acquire various powerups as you get further and further into the game, where you’ll be able to phase through certain obstacles, and behind enemies, or being able to stop time and move freely for short duration. All of these powerups add to the complexities of the world, and allow for a wider range of movements, puzzles and battles.

You’ll spend your time traversing through the world and grabbing collectibles(such as scientists), fighting off enemies, trying to come up with creative solutions in order to bypass enemies and grooving along to their funky tunes. All of this ties together to create an amazing gameplay experience that is complemented by beautifully vibrant artwork and some funky fresh music that will have you bobbing your head as you try and dispatch of enemies on the screen.

Nova-111 is a turn-based roguelite, with light puzzles elements that mixes in real-time elements wrapped up in a beautiful graphical and aural package.