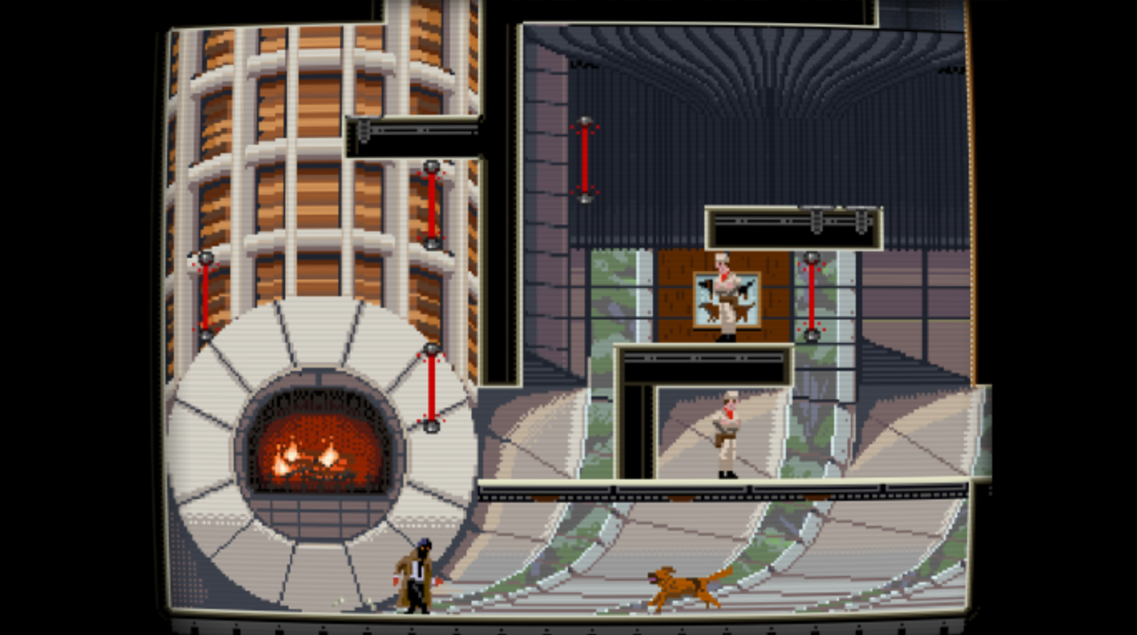 Turbogun bills Master Spy as a “stealth-based precision platformer” and while I believe that this does an adequate job of describing the game, they probably should have added trap-filled, speed-running bonanza somewhere in there, just to cover all their bases. Turbogun has created a time-sensitive stealth game that puts pressure on the player to always be pushing forward, while at the same time make it punishingly difficult when players that don’t take the time to be patient and time their movements correctly to the traps and the moving guards. Trying to balance this constantly shifting balance of speed and patience, creates an increasingly hectic environment as you try to plan out your routes as quickly as possible, while at the same time mitigating the amount of risk you’re taking.

Master Spy’s level and game design are reminiscent of Super Meat Boy, where a combination of tight controls, platforming, time pressure and quick respawns lends players to try a level “just one more time”. In Master Spy, you’re continually juggling speed and stealth in order to get through each level, this is increased further by your invisible trenchcoat that you can use. When you use your invisible trenchcoat, you’re invisible and can walk with impunity around the level and guards cannot see you. Whether they need glasses to spot a floating head that flies over them remains to be seen. When your invisible trenchcoat is activated, you move to a snail’s pace, both on the ground and in the air. When your trenchcoat is off, you move around quicker, have more responsive air controls and jump further. Combining these two concepts together, there will be times when you’re invisible, jump over a guard, take off your invisibility coat so you can actually clear the guard, and put it back on right before you land.

Master Spy mixes in some phenomenal controls, with traps, guards, enemies and the Weeping Angels from Doctor Who(well, not really but there’s an enemy in the game that’s a lot like them). You’ll be racing your way through an incredible amount detailed traps and enemies, each one requiring a certain strategy in order to bypass. You may or may not get eaten by a tiger in the game.

The difficulty in Master Spy cannot be underrated, you will die and you will die often. Whether or not you learn from each death is dependent on how bright you are(I’ve definitely leaped in front of a guard multiple times because I kept on forgetting that I need to put on my coat), but each death is a lesson and a constant reminder to be aware of the environment that you are in. As you progress later and later in the game, the site of an “easily obtainable” keycard to open up a locked door will fill you with dread, as you wonder what devious traps Turbogun has sprinkled on your way to grab the keycard. Even with a multitude of traps, Master Spy has never felt unfair to me, any deaths that I incurred were almost always my fault, whether it was because I wasn’t patient enough and wanted to speed run through it or I waited a second too long to put on my trenchcoat because I wanted to get to a keycard faster. Turbogun has done an excellent job balancing and creating each level, so that every level feels fair(once you figure out what devious traps they throw in there).

A typical run for me in game. Including all the failures.

The speedrunning aspect of Master Spy is the part that gives the most anxiety while I play. I’m constantly aware that the timer is running in the background, along with a tally of the amount of deaths that I have. The timer starts when you first spawn in the level, and ends when you complete the level. It does not refresh when you die. That’s probably my favorite and least favorite things about this. It means that if you’re trying to be too risky, you’ll die and get sent back to the beginning of the level for you to try again, with the timer still ticking. This means, that someone taking it slow and steady and only taking calculated risks can end up with a much better time than you on finishing the level, even though you had a better time on the one life that you succeeded on. A lot of Master Spy is a balancing act, and the speed running aspect of it throws in some juggling on top of that balancing act. Whether or not you try to make a leap of faith onto a platform and hope the camera doesn’t see you, or whether or not you should take it slow and steady and put on the trenchcoat to get past a hallway. By creating a continuous clock, it creates added time pressure for you to perform well and finish it in one try.

I’m a big fan of pixel art and Master Spy scratches that pixel itch and then some! Each of the 50 levels has been hand pixeled in photoshop, and the love and care show in the details of every single level. Pixel art is tricky to use effectively to create lush, vibrant, and bright environments, as hand pixeling subtle animations such as trees swaying takes an enormous amount of time and effort. The environments and enemies that is featured in Master Spy are masterfully created and the amount of subtle nuances and immersion really shines through. This is furthered by some of the most breathtaking pixel art cut scenes that I’ve ever laid eyes upon. In my conversations with Turbogun, there are almost 30 minutes of cutscenes in every single game, and each cutscene is a feast for the eyes. I’ve included a really short clip of one of the early cutscenes in the game(I don’t want to spoil the story for you), to show you what I mean. The cut scenes do a great job of conveying the story to the player, and the story feels like something straight out of a B-movie, which was endlessly entertaining