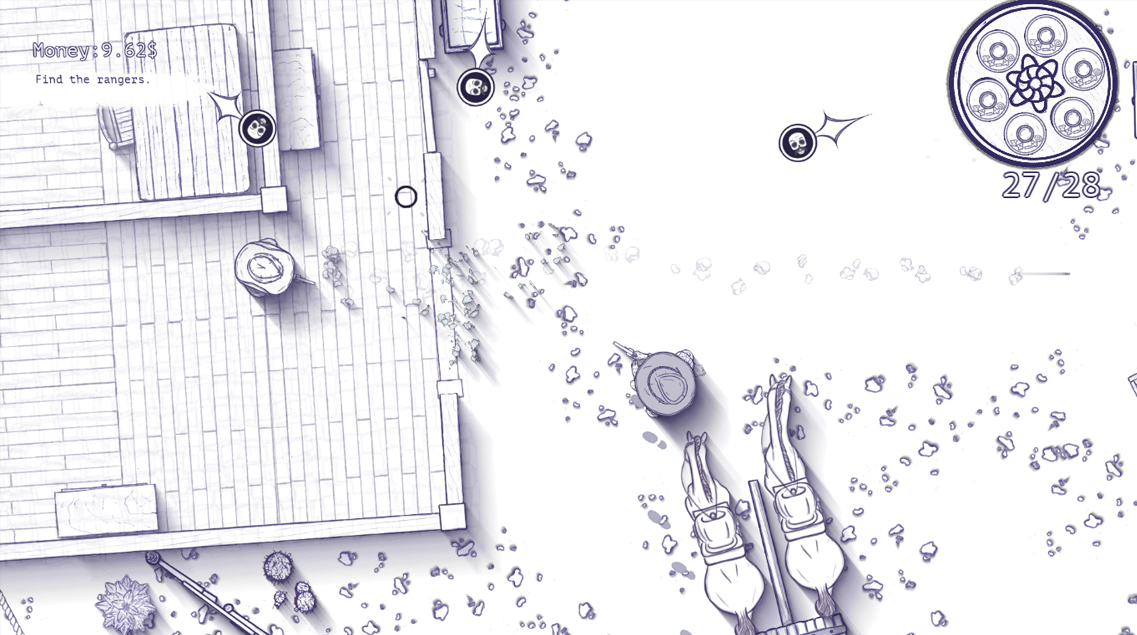 When looking at the gameplay and format of 12 is Better Than 6, immediate parallels will be drawn with the Hotline Miami series. Many of the mechanics are quite similar to Hotline Miami, self-contained levels, fast and frenetic action, quick deaths and satisfying kills. What sets 12 is Better Than 6 apart from the swathe of Hotline Miami clones that have popped up, is the interesting art style that is employed and the gunplay mechanics that are core to the game.

12 is Better Than 6 takes place in the Wild Wild West, where automatic weapons don’t exist, and manual action rifles and revolvers are the norm. This translates into the gameplay, by needing you to physically cock and reload your gun whenever you want to fire or load up some new bullets. While this sounds intuitive at first, you quickly come to realize that modern gaming has conditioned you to assume that all of that is done automatically. There are countless amounts of times where I’ve run into a building with guns blazing, only to realize that my gusnw ere in fact not blazing, as I had completely forgotten to cock my revolver whenever I wanted to fire off a shot. The action in 12 is Better Than 6 manages to walk the fine line between chaos and control, as you run into buildings, and ranches with your guns blazing, while still trying to conserve the amount of bullets that you let fly. Gone are the days where you can stock up as many rounds as you wanted and let the bullets fly, any time spent reloading could spell the end of your run. You’ll quickly start counting down the amount of bullets left in your chamber as you let the bullets fly. Every single bullet that misses is an opportunity wasted, as you may have to face a single enemy with a gun and no bullets. This creates amazingly tense situations, in which you’re completely unsure about the amount of bullets that you have left in reserve and the amount of bullets left in your chamber, and whether or not you’ll be able to take down the encroaching horde of enemies. In addition to this, each gun has it’s own special cock and reload behavior that you have to learn and keep in mind when switchiing between guns.

If firing off your gun willy-nilly and trying to engage in as many Mexican standoffs as possible isn’t your type of play style, you’re also given a knife which can kill enemies with one hit, so long as they aren’t aware of you. Stealth is an option in this game, and not one that was added in as an afterthought, as you’ll be able to complete most of the game using only your knife. In my opinion, while this presents itself as an option, using a mixture of both is best, as running around and knifing as many characters as you can, then taking them out with the gun stays true to the game style, mixing both calm and calculated murder with hairy gunplay. In addition to staying true to the spirit of theh game, it also makes the game much more manageable. Even reducing the number of enemies by one, makes a huge difference when the lead starts flying. Added to this, is that there is friendly fire, so your enemies may end up accidentally taking down their allies, while you’re peeking a corner.

While I love the gameplay, there are some very obvious flaws with the game, that while don’t make the game unplayable, it does detract from the overall experience. The biggest point of contention for me is the graphics. The graphics are beautifully hand drawn master pieces, but great art doesn’t necessarily translate to it working great for your game. The biggest problem with the art is how monochromatic it is. This creates alot of problems for the game, for one it’s hard to differentiate between your enemy, the backgrounds and yourself. The visual homogeneity makes it hard to recenter back to your character when you’re busy scouting the edges of the screen for potential enemies. Added to this, since all enemies are seen topdown, yourself and your enemies are represented with a top down vision of their hat. This creates visual ambiguity when you try to find our character amongst a rabble of extremely trigger happy enemies.

I’m not looking for a complete art overhaul, or even anything close to that, but a spinning circle surrounding your character would do a lot for creating a visual anchor. It’s also extremely difficult to tell when you can shoot through something, over something or if it’s just in fact a rock wall that you stupidly decided to shoot. Other problems that I’ve run into are extremely dumb enemy behaviors, in which they’ll all run around a corner in the same way, which allows you to quickly and easily take pot shots while still staying completely safe, and the lookahead function doesn’t seem to functioni in a way that I’ve found overly useful. It rubberbands pretty harshly, and if you lookahead too far, your character will be unable to move. In my experience, any distance where the lookahead mechanic might be useful, by the time I’m at a distance where I can do the lookahead, the enemy inevitably spots me as well and kills me, while I’m still trying to reorient myself due to the harsh rubberband movement of the camera.

While the game has it’s fair share of problems, the general look, feel and gunplay of 12 is Better Than 6 cannot be ignored, it’s an extremely difficult and rewarding game that sets itself completely apart from the plethora of Hotline Miami clones that have recently spawned since its inception. It provides a twist on the formula, has an great art style and the gameplay, while frustrating at times, is just fun. While there was a story, it wasn’t a particularly memorable story. I admittedly, skipped through portions of dialogue, just so I could get back into the game and take down as many enemies as possible with only 14 rounds in the chamber.

You’ll be able to buy upgrades for your character as well. When you run into the merchant that allows you to carry more rounds, I highly recommend you run some of the non-essential quests so that you can buy it. After all, when it comes to bullets, 12 is better than 6.