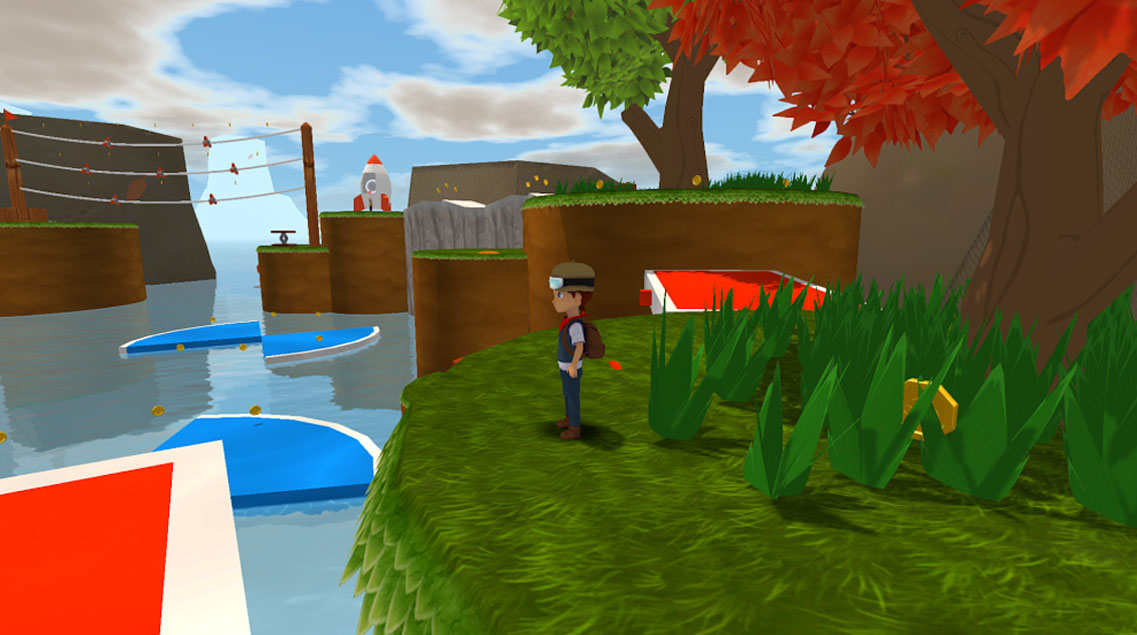 Poi is a 3D platformer that aims to pick up where the 90s dropped off. 3D platformers aren’t a stranger to a great many of us, as we fondly remember all of the fun times that we had with games such as Banjo-Kazooie and Mario 64. With such legends to stack up to, Poi certainly has big shoes to fill as it makes it tries to fill the gap in our hearts that have been left by such legendary titles in the 90s.

When playing Poi, it’s hard not to draw direct parallels from the 3D collect ‘em all platformers of the past. Poi’s success will predicate on its ability to reproduce the feelings and nostalgia that we closely tied with games from the same genre. That isn’t to say that Poi should go about and directly mirror and copy aspects of these, but it should attempt to capture the overarching concepts that were ingrained in them. This can range from an attempt to create a world that’s open and inviting or placing collectables and objectives in a way that’s challenging and rewarding to a player.

When looking at Poi and the world’s and levels that it drops the player into, you can’t help but feel a sense of wonder and excitement as you make your way around the first world. The world that PolyKid games has created manages to walk the fine line between openness and direction. It does a wonderful job with encouraging the player to explore the world that’s been crafted, with plenty of secrets and hidden caves for the player to discover, but manages to keep the player focused on the task at hand. While creating an open world that’s fun to explore is difficult to do, I would argue that it’s equally as difficult, if not more so, to balance out the freedom with direction and goals without being overbearing. Poi accomplishes this subtle mix of freedom and direction by creating objectives that are completed organically as you progress deeper and deeper into the level. You can choose to rush to these objectives and claim a spot on the leaderboard, but if you choose to take your time and explore everything that the world has to offer, you’ll naturally complete these objectives as you poke around the various crevices, caves and platforms that dot the landscape.

This leads into another factor that I think is important to creating a fun and challenging experience for this type of genre, varied objectives that are a good mix of fun and challenging platforming. When approaching Poi, it’s easy to get wrapped up in a warm blanket of nostalgia and don your rose-tinted glasses as you jump, roll and swim your way through the world. As such, it’s important to take a step back and view the game objectively when it comes to not only the gameplay elements, but level design as a whole. I stated before that objectives can be achieved organically through exploration, this is a double-edged sword. While this approach offers a very easy and natural approach to the game, this can easily lead to a situation where the game starts to feel stale and dry as a result of absent challenges in the game. While the leaderboards and speedruns can add an artificial difficulty to the game(if speed running is your thing), at times Poi eschews difficulty and challenge for a more approachable experience. While I believe that Poi’s accessibility is an important factor when it comes to reviewing the game, as the music and graphics make it very kid-friendly, I’d like to see more challenging objectives and platforming in the game. While the challenges in Poi can be likened to a fun romp in the park, there are times when you want to be challenged by the world and have your skills put to the test.

Last but not least, controls are going to make or break a 3D platformer. This genre is notorious for endless amounts of player frustration when it comes to controlling your character. These frustrations are rooted in the fact that you’re viewing the character from a third-person view, thus making it hard to judge distances and jumps and whether or not you’ll be able to pull off certain moves. Added to the fact that these genres are known for introducing a wealth of new movement mechanics, correct execution of these controls will dictate a player’s attitude towards the character when playing the game. With all of these potential stumbling blocks in mind, it’s satisfying to say that PolyKid has done an amazing job at creating solid movement mechanics that complement the gameplay. You’ll have the ability to triple jump, high jump and rolls(along with a rolling jump mechanic that’s currently undocumented).

My speedrun path for the first objective. If you know of a faster path, let me know!

Overall, Poi was an extremely enjoyable 3D platformer that took me back to the days of Spyro and Mario 64. While the content is a little on the light side right now, I look forward to what PolyKid brings to the table as they introduce more worlds and and challenges. I do wish that there were more challenging platforming puzzle. I was able to meet one of the developers of PolyKid at an event and he let me know that they’ve been getting a lot of feedback about it. I’m currently ranked 7th place on the leaderboard for the beginner level, and I’ll be optimizing my routes in order to start ranking higher for the rest of the levels. For me, the game has a ton of replay value, as I enjoy speedrunning games and pushing the engine to it’s boundaries.

note: Review has been updated after Poi exited Early Access