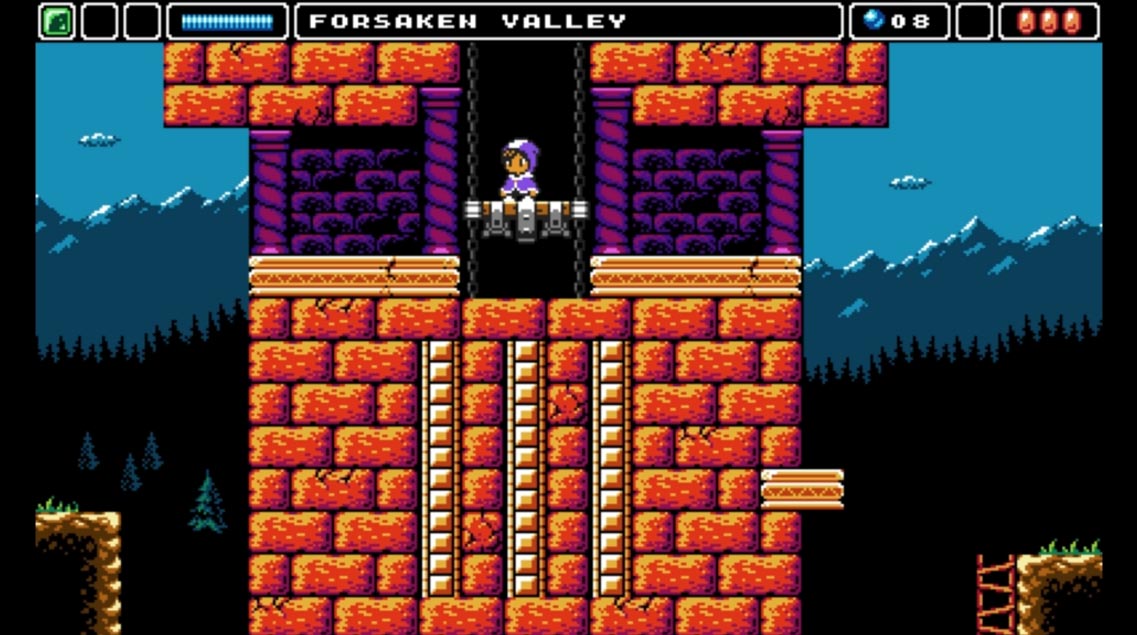 Alwa’s Awakening is a retro-inspired game, that harkens back to the days of NES gaming, with its quaint graphics and chiptune soundtrack, we’re easily transported back to yesteryear. Alwa’s Awakening is an ambitious metroidvania that features hectic boss battles, tricky platforming and fun puzzles.

Alwa’s Awakening is a game that immediately snatched my interest the first time that I saw it. I’m a complete sucker for retro-inspired games, and Alwa’s Awakening is the very definition of that. It seems like the perfect storm of NES inspired graphics and music, as well as being one of my favorite game genres. Alwa’s Awakening is an NES-inspired metroidvania that will have the player running around, exploring the expansive world that’s been built, fighting enemies, and solving various puzzles that litter the dungeons.

Alwa’s Awakening plays like any other metroidvania that you’ve played so far, you’ll be traversing a world, gaining power up and backtracking in order to access areas that you would were unable to reach before. The key difference between Alwa’s Awakening and any other Metroid or Castlevania game, is that it’s not completely action based. While there are many enemies that litter the dungeon floor, you’re exposed not only dangerous enemies, but a variety of puzzles that you’ll need to solve before moving onwards. While previous metroidvania games are usually simple enough to progress in once you get the required power up, Alwa’s Awakening will push you to use your new abilities in new and interesting ways. Not only will you use these abilities to progress further into the game, you’ll use your abilities to discover the multitude of secrets that are sprinkled throughout the game. Secrets are present around every corner, and is one of the things that I appreciated the most while playing Alwa’s Awakening. You’ll have to poke your nose into every nook and cranny in order to discover everything that the world has to offer you.

While my experience with Alwa’s Awakening was wholly positive, there were a couple of issues that I had with the game. These little annoyances may be more of a personal preference, but I’ll lay them out here nonetheless. While Alwa’s Awakening displays its influences proudly and does an amazing job of conveying the love and craftsmanship that went into creating it, it doesn’t port over everything from the NES era. To put it simply, Alwa’s Awakening isn’t difficult, while the boss fights are a little challenging, the enemy design are a little on the poorer side, and fighting enemies is relatively easy and uneventful. I would have liked for there to be much more of a challenge while making my way to the boss, as it is, it’s a mostly straightforward path to the boss. To go along with that, while there are many puzzles that require you to use your abilities, for the most part, the puzzles aren’t too difficult. While there may have been a couple of puzzles that took a little bit of thinking, most can be solved quite easily and quickly.

With all of this being said, there is one thing about Alwa’s awakening that firmly cements it as a game that I will be playing for a good long while. Like every good metroidvania, Alwa’s Awakening allows you to sequence break. I’m not sure if the developers intended for this to happen, but there are some sequence breaks that you can do with enough practice, and being able to learn how to speedrun my way through a game is something that I enjoy quite a bit. It’s these types of emergent gameplay that’s generated through a player’s will that really keeps a game living, long after support for it has stopped. It’s the reason why the Nuzlocke challenge was created for Pokemon, or how sequence breaks are still being discovered for The Legend of Zelda: Ocarina of Time to this day.

While Alwa’s Awakening is at times a simple walk through the park, the product is more than the sum of its parts. There’s not a single part of the game that wasn’t entirely enjoyable to play through. While there were some easy parts, the overall experience was a joy to play through and if you’re a fan of speedrunning or metroidvanias, I’d highly recommend picking this game up.