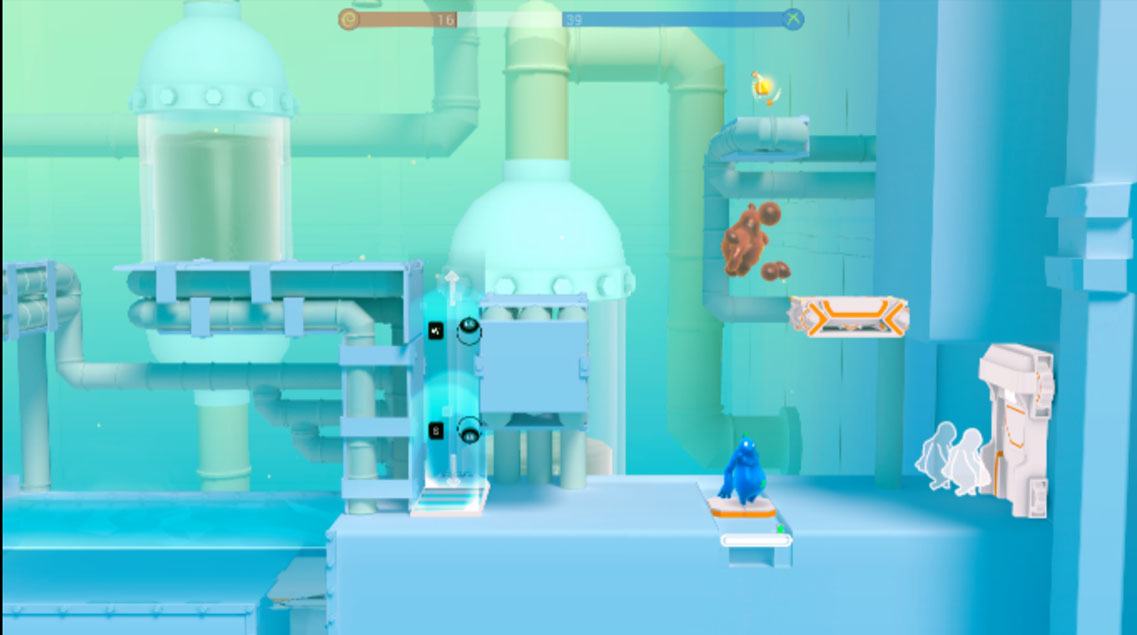 The main mechanic of Shift Happens is your ability to grow and shrink your character, with the larger version and smaller version having both their own sets of pros and cons. The caveat to growing and shrinking at will, is that the two characters that are inextricably linked to each other, so when one grows the other one shrinks and vice versa. This introduces quite a few mechanics into the game, and makes for some of the more interesting puzzles that I’ve had the pleasure of working on since Portal.

When reviewing this game, I’m only talking about the local co-op capacity, as I believe that’s exactly where the game shines. When you first start off the game, you go through a couple tutorial levels that really help you gain a sense of how movement works. You’re free to grow and shrink as you please, with no repercussions for your partner. One of the more enjoyable aspects of Shift Happens, is its tutorial levels, as I believe a strong enough level design for a simple game will forgo the need to read lengthy text tutorials and Shift Happens manages to do just this. Right from the start you’re gently led along and presented different sets of challenges that highlight your abilities(as well as your inabilities). My partner and I quickly found out the various pros and cons of being in a large or small version of our characters, with the larger ones being weight and heft on his side, at the expense of speed and maneuverability, with the opposite going on with your smaller version.

One of the most difficult things to get right when designing and creating puzzle games, in terms of game design, is to create a game with a gentle enough difficulty curve that the players can figure out what to do and where to go, but not too gentle has to make the game feel like it’s slowly trudging along. Shift happens manages to walk this very fine line between challenging and achievable, as I always felt like the solution is at hand, even if it might take me a little bit more time to think about it. This is most apparent as you progress onwards from the tutorials. You’re given a small set of instructions and context clues on how to proceed, and as you progress further and further into the game, these same basic moves are integrated very naturally and organically into the game, giving you a frame of reference for you to work off of.

Cooperative games often have a glaring weakness, that as the game progresses further and further, it becomes less about working together and using both players together, as it is one person that does the majority of the work, while the other player walks around and a room toggling different switches. This is not the case in Shift Happens. Both players will work together to solve a problem, not only in a mental capacity but also in a physical capacity as well. Puzzles will require both players to navigate around the rooms and perform well-coordinated movements in order to proceed to the next area. There are a number of movements that are available to your character, with each of them having their time and place to use in the game where appropriate. You’ll be able to grow and shrink your character at will(with repercussions happening to your counterpart), you’ll be able to attract coins toward you and you’ll be able to pick up the other player and throw them(well the bigger character and toss the smaller one). Each of these mechanics are solidly implemented and work well when integrated with the puzzles.

Shift Happens provides one of the better experiences that I’ve had with co-op puzzle platformers. While there will always be references to Portal 2, Shift Happens presents a cooperative gameplay that really makes both players think about the environment, the puzzles and possible solutions. I played through the game with a non-gamer friend, with close to zero gaming experience. It was an interesting growth period for my friend, as we slowly progressed through the game and she continually hit upon new and better ways to maneuver by herself, without any cues or hints from me. I was afraid I’d have to walk her through the game and tell her exactly what to do, but different concepts were introduced at a gradual enough pace where this wasn’t an issue. I think this speaks volumes for the level design and challenges that Shift Happens introduces to its players. The level design and gameplay is introduced in such a way that the evolution and introduction of new and different mechanics feel natural to those playing, and there was more than one time where we were yelling at each other what to do and where to go.

On an aural and visual level, Shift Happens passes with flying colors. Each environment that you explore in is well put together, with distinct visual styles that are unique from each other. From the sterile labs that you start off into the red canyons that you have to traverse. Each environment is presented in a beautiful low-poly(although mid-poly might work better) art style. The soundtrack and sound effects properly complement each other and add to the atmosphere of the game.

This review is on the shorter end of things, as the game still isn’t fully fleshed out yet. I had an enjoyable time with the game and will hold off on playing it again until the full release is out. If I had any critiques about the game, I felt like some of the puzzles were a bit too easy, but for the most part the difficulty curve really helped move things along at a good pace. The platforming was solid and the controls were tight, which are important when dealing with a puzzle platformer. There’s nothing more frustrating than not being able to control your character in the direction you want, because the controls were sloppily implemented.