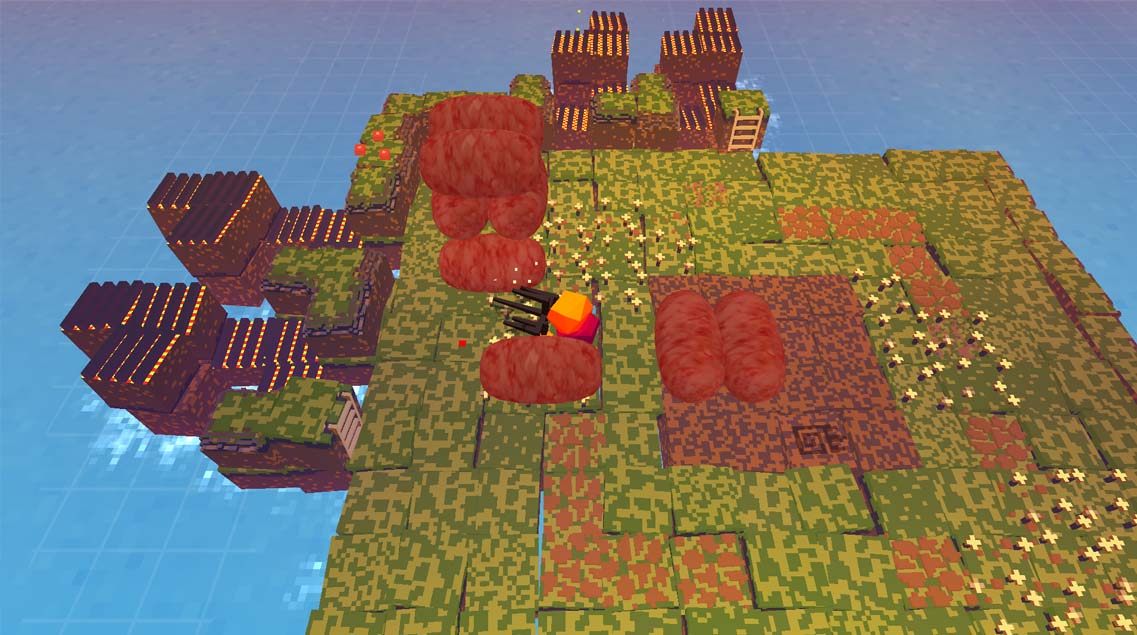 According the Steam page for Stephen’s Sausage Roll, SSR is a game that’s described as a “simple 3d puzzle game”. While the description of appears to fit SSR perfectly, “simple” would be the last word I would use to describe Stephen’s Sausage Roll. The whole game is wrapped up in a shroud of mystery right now, with Increpare giving little insight as to what the game is about. With little information from both the trailer and the product description, our review will try and shed some light on one of the premier puzzle games of the year, thus far. With that said, I played SSR without any knowledge of what the game was beforehand, and I think I had a much richer experience for it. In this review, you’ll find GIFs of me solving puzzles, wandering the overworld and getting stuck in dead ends. While I don’t think that these GIFs will spoil the entire game for you, if you wish to get a general feel of the game without spoilers, I’d read as far as the next paragraph before making a decision on whether or not the game is for you.

How to toast your sausage. Also, the only solved GIF you’ll see here.

Stephen’s Sausage roll can be thought of as a more beefed up version of Sokoban. You’ll spend your time awkwardly waddling around the landscape, as you use your sausage skewer to roll, skewer and roast your sausages over the open grills that are strategically placed in each of the levels that you’ll encounter. While the premise of the game is a bit odd, the whimsical nature of the game belies its teeth-gnashingly difficult puzzles. You’ll spend the majority of your time hitting the “undo” button and rage quitting back to the overworld, in search of another puzzle to try and tackle. If we were to try and rate Stephen’s Sausage Roll on an “easy, medium, hard” scale, the first level you do drops you at “insane” and only cranks up the difficulty from there. That’s not to say that the game isn’t enjoyable. In fact, the incredible difficulty and craftsmanship that goes into each level is both extremely refreshing rewarding. With all that said, Stephen’s Sausage Roll is clearly made for those that love puzzle games. Your preconceptions will be broken and your brain will be mercilessly twisted as you try and perfectly toast all the sausages in the level. The movement mechanics are also unique, with forward and backward movement only being possible in the direction that you’re facing. In order to turn, you will need to pivot the entire character, along with the sausage skewer, in order to turn to the left or right. You can see how movement works in the GIF below.

Getting used to the movement isn’t too difficult, but it’s core to the gameplay

Where most puzzle games start you off with a gentle learning curve the reinforces the game’s main mechanic, Stephen’s Sausage Roll’s approach toward level design has taken the exact opposite of that. If you were to visualize the learning curve for the puzzles, the average game would look like a gentle rolling hill. SSR takes that expectation and throws it out of the window by presenting you with a sheer vertical cliff that you are expected to scale with minimal preparation. Where a gentle learning curve is usually the norm, Stephen’s Sausage Roll’s difficulty curve is more similar to a vertical cliff that you need to scale. There’s no hand-holding or simple tutorial levels that you have to work through before you get to the meat of the game. Rather, the game drops you off in the middle of an overworld, with a variety of puzzles that you can pick and choose to try at your own leisure. These puzzles aren’t simple and completing your first puzzle may take up to half an hour. It took me about 15 minutes in order to solve my first puzzle, and 3 and a half hours in order to finish off the first world. The most remarkable thing about Stephen’s Sausage Roll is its ability to introduce fresh puzzle that play with your preconceptions, expectations and push the boundaries on what you already know. Each puzzle that you encounter feels like a logical progression from the one before it, while at the same time manages to broaden your horizons on what your character and their skewer can do.

The game was difficult enough already when it was only in two dimensions. I decided to ragequit.

Each level design feels fresh, with no two levels ever feeling the same as the one before it. Rather than building upon mechanics that are introduced in previous levels, new ways of approaching a problem and thinking about how a problem should be solved are introduced organically in the game. One of the hardest things to do in a puzzle game is creating new puzzles that the player will enjoy. This issue is usually solved in one of two ways, with more and more mechanics and obstacles that block your way, or creating larger and larger levels that are stuffed full of mechanics. There are issues with both of these approaches, much of the issue lies in the player’s ability to eventually brute force a method to solve the puzzle another has to deal with how many mechanics can be introduced into a level before the player starts to feel bogged down by the amount of things being taken into consideration. While both of these are valid solutions to creating variety in a puzzle game and extending the life of the game, excessively relying on them tends to create a detrimental gameplay experience. Difficulty is introduced by mental fatigue, rather than difficulty coming up with novel way of approach the puzzle. The level design is Stephen’s Sausage Roll manages to combine the best aspects of these, while still keeping the levels centered on finding novel solutions and new approaches, rather than pushing for over-complexity. Many of the levels are designed in a way where there seems to be an intuitive way to approach the problems, or at least a possible avenue that almost begs you to give it a shot. All of these “intuitive” solutions are almost always completely wrong, and you’ll end up exactly where you started. Increpare’s ability to create levels that play with your expectations of how a level should be solved, while at the same time hiding the actual solutions several layers deep, allows for revelatory experiences when you’re finally able to shift your frame of mind away from whatever track you were on a first.

If you solve a puzzle using your intuition, you’ll get yourself stuck in a corner.

I’ve spent a little under 5 hours playing Stephen’s Sausage Roll so far, and I’ve enjoyed every frustrating moment that I’ve had with it. The level designs are impeccable, and the care that has gone into every single level shines through. Puzzle games are meant to introduce you into challenging scenarios that push you to maximize your movesets and force you to approach problems in ways that you would never have thought of. A good level serves to catalyze your thought process and put you on the right track towards the correct solution. Stephen’s Sausage Roll does this in almost every single level that you play. I felt like I’ve barely scratched the surface of the game, and with many more hours and levels to go, I can confidently say that Stephen’s Sausage Roll is one of the best puzzle games that I’ve had the pleasure of playing. While I thoroughly enjoyed my time with Stephen’s Sausage Roll, my recommendation comes with a serious caveat. I don’t recommend it if you don’t enjoy puzzle games. When looking at the gameplay, the difficulty and the higher than normal price tag, all of these elements serve to polarize its potential player base. There are already those that are calling foul, that the game is much too expensive for what it is, and they may be right. If you’re not a fan of puzzle games, then the asking price is probably much higher than you expected. However, for those that enjoy an excellent puzzle games with strong level designs, the satisfaction you get from solving any one of the hundreds of mind-bending puzzles is more than worth it. You can pick it up from the Steam store here