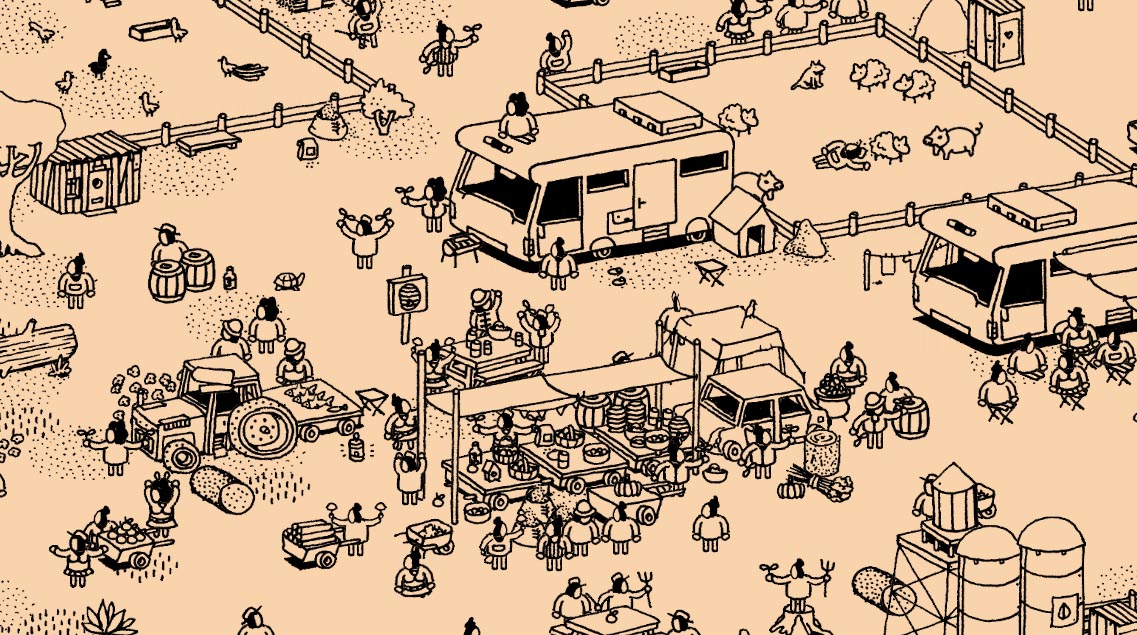 While it’s easy to draw direct parallels between Hidden Folks and the multiple clones and spin-offs of various Where’s Waldo books and games, Hidden Folks has taken that formula and tweaked it, in order to create a decidedly different experience. Where other hidden object style games are centered around having the player closely inspect the environment that surrounds them, Hidden Folks encouraged the player to interact with the world presented to them.

Hidden Folks is a Where’s Waldo game that de-emphasizes the importance of finding a certain character or object, and shifts that focus towards exploring the world and environment presented before you. My time with Hidden Folks was well spent, and I enjoyed the various interactions and reactions of in game objects when I clicked on them. Whether it was watering plants in order to make them grow, or clicking on a lump inside of a snake in order to make it spit out a rabbit, every interaction(and potential interaction) was an absolute joy. Hidden Folks alternates between giving you expansive dense world with thousands of objects, to tiny little microcosms that require more interactions to chain together in order to make the objects that you need appear. The large experiences are almost overwhelming, as the entire world comes to life. You’ll see people sitting around, waving and jumping, leaves shaking and various animals moving back and forth. Luckily, you’re able to zoom in, so you can focus on a specific part of the map and not feel overwhelmed. In contrast, the smaller maps are tight microcosms that usually require more interactions to make the items that you want appear. While both worlds that are presented are definitely a lot of fun, I prefer the smaller worlds that have you agonizing over every tiny detail, and seeing how much animation and interaction the developers were able to squeeze into it.

I think the key difference, and the reason why I was so hooked on Hidden Folks, is how simple and elegant many of the interactions are. I’ve spent a good amount of my childhood looking at Where’s Waldo books, and there was always a saturation point where I would be too fatigued to continue my search. Hidden Folks completely circumvents this problem by creating a world that’s alive and dynamic, and creating vague hints for every item that you need to find. The gameplay for Hidden Folks is relatively simple, but the execution and charm that it exudes will immediately suck you in.

The only way to describe the sound design for Hidden Folks is quirky and charming. Every sound that comes out from interacting with the environment comes straight from the mouth of Martin Kvale. Not only is the art direction on point, and the gameplay engaging, the sound design does an amazing job at encapsulating the game and raising it to the next level. It’s mind blowing how many different sounds there are, and being able to interact with the environment and getting an auditory response is extremely rewarding. I’d definitely recommend playing with headphones on to get the full experience.

Hidden Folks does an amazing job at recreating a world that the developers have created, every part of the world is polished and the interactability keeps you completely engaged in it. I’ve never felt frustration while playing the game, and while some characters may have been on the more difficult side of discovery, I’ll usually end up accidentally discovering them while explore the world and seeing what else it has to offer me. Hidden Folks is an absolute gem of a game, and if the quirky graphics, calming gameplay and interesting sound design sound at all interesting to you, I’d heavily recommend picking it up and giving it a shot.