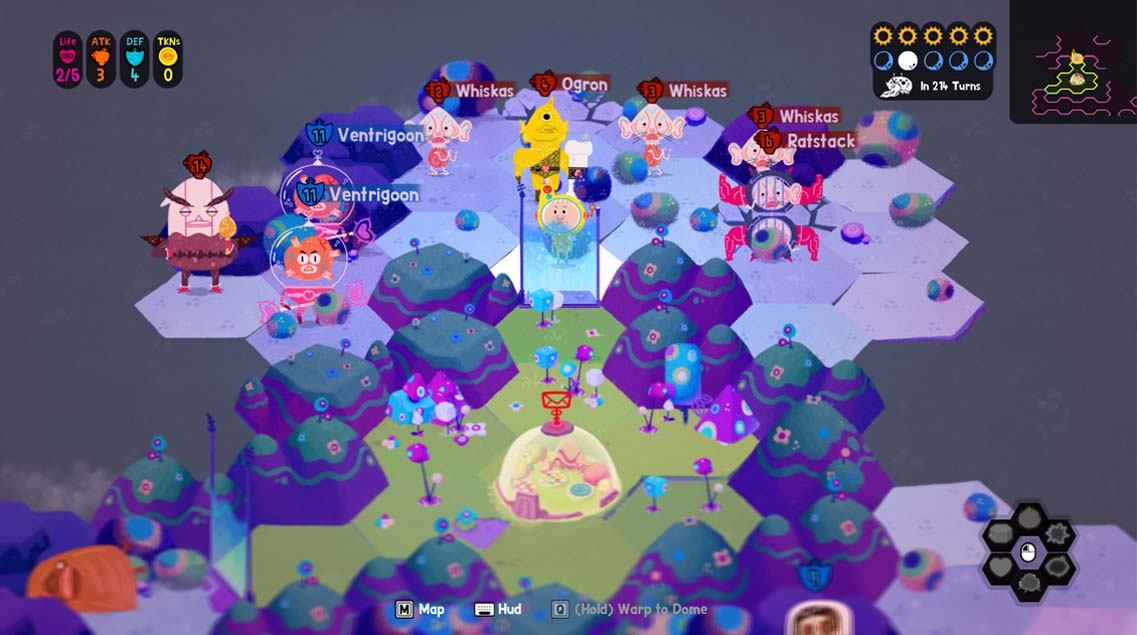 Loot Rascals is a roguelike that will have yolu carefully planning your every move and brooding over every bit of loot and equipment that you’ll discover. You’ll need to correctly poredict enemy behavior, and plan your actions accordingly in order to survive. Loot Rascals is a game that is centered around properly planning your every move, and being able to predict the way that your enemies will move. Loot Rascal’s gameplay strongly reminds me of Nova-111, where it’s not so much the strength of the enemy that will defeat you, but your failure to take into account the way that enemies behave.

At its core, Loot Rascals is a roguelike that isn’t afraid to ramp up the difficulty in the first world, this stands in stark contrast to its fun and whimsical atmostphere that it provides. You’ll encounter cleverly named enemies, take part in silly banter and micro-manage your loot, all the while bashing enemies(or trying to avoid getting killed). The gameplay in Loot Rascals is decidedly simple, you’ll land in a level and need to find your way to the teleporter in order to get to the next level. The game progresses turn by turn, as you would expect from a typical roguelike. Whenever you make a move, any surrounding enemies will also move as well. What’s most interesting about Loot Rascals, is that each individual enemy has it’s own interesting behavior, and in order to make your way through the game, you’ll need to pay attention to how each enemy reacts in relation to your actions. For example, Horsebros(which are a combination of a fish and a horse) will switch heads between every single turn, with the Horse being the much stronger of the two. In order to beat it easily, you’ll need to carefully plan out where you’re going to move, and when you want to initiate combat. If you plan it out correctly, you’ll be able to fish the fish and leave relatively unscathed, but if you don’t, you’ll get the daylights punched out of you and respawn from the beginning with no loot. To add even more complexity in a game, where each type of enemy already has its own attack patterns, the game also has a day/night system that it cycles through based on your movement. Every enemy in the game has an alignment on which time of day they prefer. If they prefer the daylight, if you encounter them, then they will always attack first, and the same goes for enemies that prefer night time. The trick is that when you fight an enemy when it isn’t their preferred time of day, you’ll have the initiative and can take out enemies before they even get a chance to touch you.

The core gameplay in Loot Rascals has alot of micro-managing in it, where you’ll need to walk specific routes, and trick certain enemies into behaving a certain way so you’ll be able to fight a weaker version of it, or attack it when you have the initiative. Every enemy encounter should be properly planned out, as when you start, you don’t have much health to start with. You’ll be able to obtain more health by finding an appropriate card that you can equip.

The inventory and equipment system in Loot Rascals, is very reminscent of a card game, where each piece of loot/equipment that you find, you receive in the form of a card. Some cards are very basic and will give you a flat bonus no matter where you put it in your two row and five column grid, but others get very specific and may increase or decrease certain stats if you place them in a specific order. For example, you may find a piece of equipment that will give you a +1 to attack if placed on column three, but if there is a card to it’s left, then that card suffers a -1 penalty. I found the system quite intuitive, found being able to correctly juggle and balance cards that you find, was alot of fun for me. Depending on your playstyle, you can go for a more balanced build that straddles the line between attack and defense, or weigh heavily in one direction. Each build requires a different playstyle, as an attack heavy build will need the first attack intiative, while a defense heavy build has the option of slowly and surely ploughing through enemies and blocking the majority of attacks.

Loot Rascals is a game that makes you think, and it’s a different take on the Roguelike genre, that I found extremely refreshing. At times, the game started to feel more like a puzzle game with some RPG and roguelike elements, rather than just a straight roguelike like I was expecting. It’s an excellent roguelike that’s wrapped up in a very beautifully polished package. The art direction is astounding, and the sound design is sublime. If you a roguelike that mixes in elements of chess and a trading card game, this game may be up your alley.