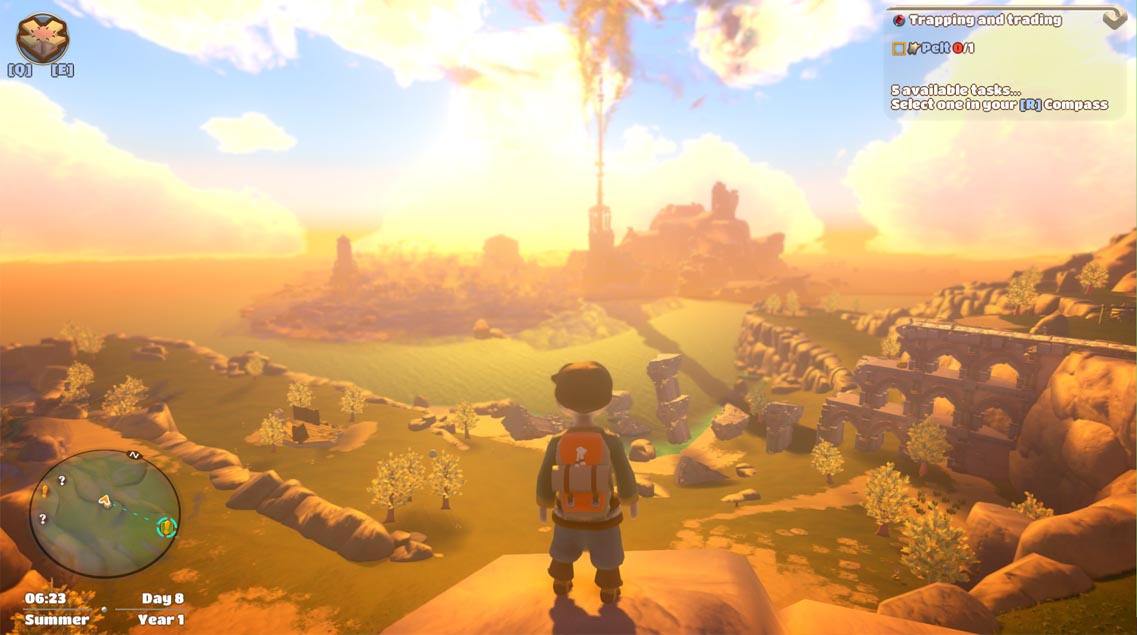 Yonder bucks the trend of traditional open world game by removing a key component that we look for in almost every open world RPG that I’ve ever played. Combat has absolutely no place in Yonder, and I think this distinction is Yonder’s biggest strength and one of it’s most glaring weaknesses. Yonder breaks the mold that is present in the large majority of games, it creates a single player experience that focuses on every aspect you’d expect in an open world survival game, except for combat. This lends Yonder the ability to distinctly set itself apart from other games of the same genre. While this certainly makes Yonder unique, we do have to remember that unique isn’t always a good thing. Yonder has an uphill battle to fight when it is inevitable compared to games such as, Stardew Valley, Harvest Moon and Zelda. Despite these comparisons, Yonder is able to deliver a unique experience that sets itself apart.

When compared to Stardew Valley and Harvest Moon, Yonder feels like a “lite” version of these games. There isn’t the same depth or complexity that we’ve come to expect from the game. As for comparisons to Zelda, the visual style is reminscent of Wind Waker, and if you enter the game with expectations of combat, you’ll come out with a negative impression. In comparison to all of these games, Yonder seems to fall a bit flat, it’s not executed nearly as well and combat is entirely missing. While this may disappoint some players, I think it’s important that we shift our framing for Yonder, this isn’t a game that was designed with combat in mind, or for continuous action. At it’s heart, Yonder is game that tries to immerse players into a visually appealing world, and provide a rich experience that should keep you plodding along and able to relax while playing it. There’s no rush and no need to feel like you need to achieve enough materials in order to build the latest and greatest item, nor is there the complexity in crafting we’ve come to expect or a varied battle system that will have you analyzing your opponents attack patterns. Instead, we’re presented with a game that encourages you to explore, slow down and immerse yourself in the world, and attempt to create a life and belong on the island.

Yonder provides some of the most relaxing gameplay that I’ve had the chance to play this year. Being able to explore the island, and all the little nooks and crannies that Prideful Sloth has slipped into the game, feels organic and rewarding. There isn’t the constant pressure in Assassin’s Creed games, where you need to work your way towards certain landmarks. The exploration system feels natural, and most importantly, it feels like you’re actually able to explore the island at your own leisure. The exploration system isn’t over gamified in a way, where you feel the need to continually explore and hit the next marker. You’re able to take the game at your own pace and soak in your environment and the creatures that surround you.

Quests and objectives in Yonder seem more like gentle prods into the right direction. Quests are there, and are quite easy to locate, thanks to the compass system that points to your quest objective, but again, there’s no pressure on when you need to accomplish quests. If you feel like you want to take the time and waste a couple hours fishing, which I have admittedly done, you’re more than free to. Comparisons can be made to the quest system in Skyrim, where quests serve more as suggestions on where to go when you feel like it, rather than instilling a sense of urgency. The lack of a strong direction does create issues with the overall game. The story doesn’t stand out in a way, and is ultimately forgettable. While it’s great that the game allows you to explore, there are times that you don’t feel the need to advance the game any further, and bask in content. While this isn’t a bad thing, it does room for the player’s interest to fall off.

While I did enjoy Yonder, I do think that the gameplay still feels “lite”, and is not nearly as fleshed out as it can be. Personally, I didn’t use the farm as much as I think the developers wanted me to, nor were some of the crafting decisions that were made the most intuitive. It’s slightly annoying that I have to run to a certain location in order to get my planks, rather than being able to craft them on my own. Or that the map system isn’t fleshed out enough, with buildings and places not being labeled properly. All in all, it feels like the developers spread themselves a little bit too thin when trying to implement all of the features they wanted. While I think that this game works great if you’re trying to relax and explore the world, there does seem to be a little bit of polish that is missing from the game in general.

If you’re looking for a game to sit back and relax with, Yonder will scratch that itch. The game exudes an aura of innocence, which is enhanced when you realize that the gameplay is a bit on the lighter side. You’ll never feel stressed for materials to scavenge, nor will you be particularly challenged when trying to gather certain materials or craft certain items. While I think the game could have used an extra layer of polish, the simplicity of the game, the beautiful graphics and relaxing soundtrack make it more than the sum of it’s parts.