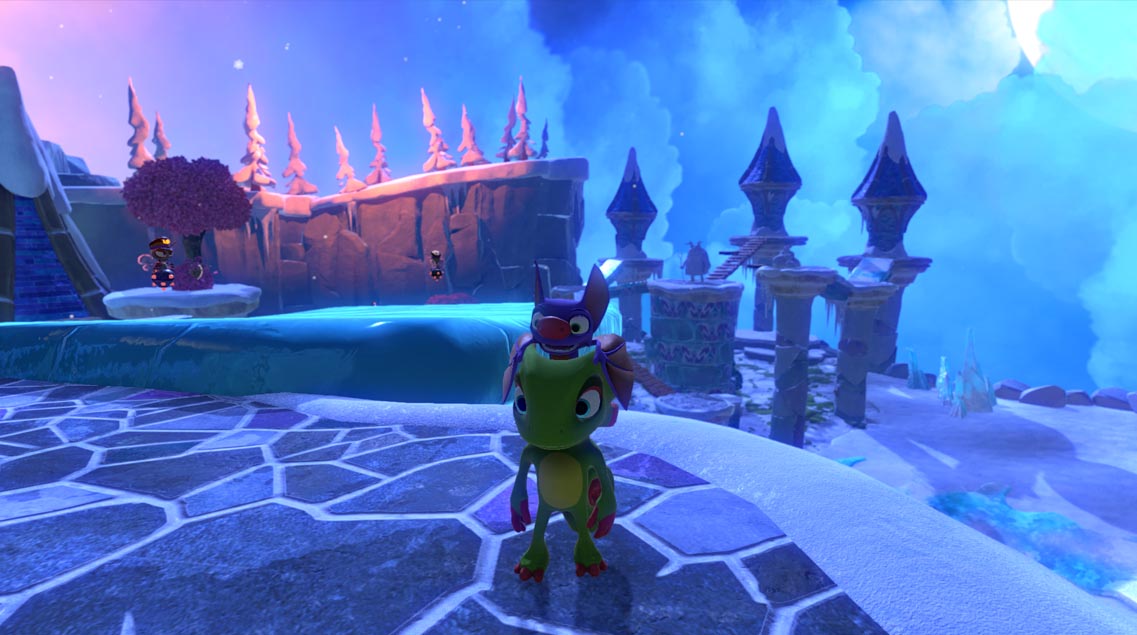 The release of Yooka-Laylee was an uphill battle for Playtonic, no matter where you look in their pre and post-release schedule. It’s a game that has been met with a veritable firestorm from the internet, youtubers and the general media, as well as having to undergo the challenge of being perceived as the spiritual successor to Banjo-Kazooie. Yooka-Laylee occupies a genre that has long since been left behind in the 90s. Third person platformers haven’t been in vogue since the Playstation 1 era, and Yooka-Laylee has taken on the burden of being one of the most high profile third person platformers to release in this generation of gaming.

Yooka-Laylee’s gameplay is very reminscent of the gameplay present in Banjo-Kazooie. Each game world is expansive, and only gets larger as you progress further into the game. There’s nothing like trying to climb up the side of a mountain that you weren’t supposed to, or trying to find alternate routes to an elusive feather. As you move further and further into the game, you’ll get more and more abilities that will help you traverse the landscape in different(and potentially exciting) ways. Along the way you’ll be collecting feathers dotted around the landscape as well as solving simplistic puzzles in order to get pagies, which are the equivalent of puzzle pieces in Banjo-Kazooie. The collection of pagies is where the game start to hit it’s first speed bump, while some of the pagies are fun to figure out how to collect, the quests that grant you pagies are inconsistent at best. While some are enjoyable, there are others that are just inane and require you to just try them over and over. The most notable of these quests are any of the ones that involved Kartos, which will have you controlling a minecart in a 2.5d runner game, reminscent of games such as Temple Run or Canabalt.

One thing that I really appreciated about Yooka-Laylee was that the developers really allowed you to explore the world and go where you see fit. While there are times that it’s quite confusing on where you should be going next in the hub world, each level allows you to travel and go where you see fit. Explore the worlds of Yooka-Laylee has been one of the most enjoyable experiences I’ve had in a game recently. Keeping in mind that I love discovering sequence breaks, so finding out ways to get to where I shouldn’t be able to get yet is a secret pleasure of mine.

I quite enjoy the sound design of Yooka-Laylee, while there have been others that have not been as enthusiastic about the seemingly inconsistent themes when it comes to the background music, I’ve found that each track fits the environment quite well.

While there is quite a positives to Yooka-Laylee, I’d be remiss to say that the game is perfect. For one, the combat in the game is absolutely lackluster, with none of the combats are boss fights being particularly enjoyable. Fighting in the overworld is formulaic and boring, with mindless button mashing that will just have you spinning in circles, and no Z-targeting to lock onto enemies that you want to shoot a sonar beam towards. Most of the boss fights are quite formulaic, and you can easily master them after one or two tries. Another pet peeve of mine was that the camera is extremely finnicky, Playtonic has since put out a patch that helped with it’s responsiveness, but it still isn’t as responsive as I’d like it to be.

All in all, Yooka-Laylee is an enjoyable game that borrows heavily from Banjo-Kazooie, it brings in all of the good and all of the bad that it came with. While others have complained that the world for Yooka-Laylee isn’t as well thought out, or that the mini games or quests aren’t nearly as fine as they were in Banjo-Kazooie, I’d like to take the time to point out that Banjo-Kazooie wasn’t perfect either. Yooka-Laylee not only has to tackle the issue that it’s creating a game in the modern gaming world, where expectations for games are extremely different from back then, it also has to fight an ever-losing battle against nostalgia. You’d be remiss to think that Banjo-Kazooie also wasn’t a battle with frustration as you combed over the entire level looking for that last note. Yooka-Laylee does an amazing job at recapturing the joy of the 90s platformers, and while there are definite faults in the game, it is an enjoyable one. If you ever feel frustrated about a certain quest or task, my recommendation would be to just skip it, if you’re not planning on beating the game 100%, it’s not worth your time trying to wrestle an out of control minecart with memory issues.